Joe Biden defended the heartfelt war story he told a New Hampshire crowd last week as having gotten its ‘essence’ correct after an analysis showed it was nearly entirely fabricated, or a combination of unrelated memories.

The former vice president brushed aside a Washington Post report showing he got numerous details wrong when he talked about awarding a Navy war hero the Silver Star.

‘The assertion I made was there was a young man that I attempted to pin a medal on at the request of the commander and he said “I don’t want it. He died. He died.” It turns out that’s true. The young man did say that,’ Biden told The Washington Post of his tale of awarding a medal to a soldier who told Biden he didn’t want it because the colleague he was trying to save died.

‘They went back, I’m told – I didn’t see the story – but, yeah, it’s exactly true. That’s what I was talking about. There was a separate incident that occurred in a different time and a different circumstance. But what I was talking about was a young man. I mean, what is the gaffe when I said there is a young man I tried to pin a medal on and he said “I don’t want it sir. He died. He died. He died,”‘ Biden said.

‘I was making the point how courageous these people are. How incredible they are. These generation of warriors, these fallen angels we’ve lost. I don’t know what the problem is. What is it that I said wrong?,’ he added.

Biden, 76,  has been battling questions about his ability to take on President Donald Trump after he made a series of gaffes on the campaign trail, resulting in a growing narrative around his age and mental capacities which his team has been fighting to counteract.

But the former vice president argued he got the ‘essence’ of the story about the solider correct.

‘I think it’s ridiculous. The essence — that there’s anything I said about that that wasn’t the essence of the story. The story was that he refused the medal because the fella he tried to save and risked his life saving died. That’s the beginning, middle and end. The rest of you guys can take it and do what you want with it,’ he told the Palmetto Post and Courier when he was campaigning in South Carolina on Thursday.

‘The central point is it was absolutely accurate what I said. He refused the medal. I put it on him, he said, “Don’t do that to me, sir. He died. He died,”‘ Biden noted.

He said he ‘didn’t think’ he got the story wrong.

‘No I don’t think so, but I haven’t seen the article,’ he said in reference to The Washington Post analysis. 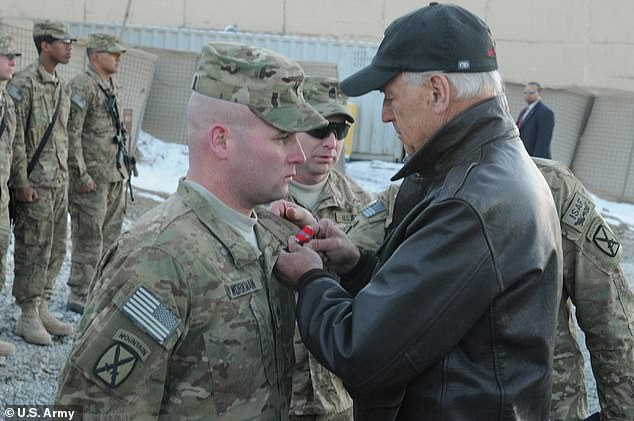 Biden pinned the Bronze Star Medal for Valor on U.S. Army Staff Sgt. Chad Workman at Forward Operating Base Airborne in eastern Afghanistan, on Jan. 11, 2011; the experience forms one part of the tale the now-presidential-candidate assigned to a naval officer in a different part of Afghanistan, getting a different medal for a different act of bravery

The Democratic Party’s presidential front-runner told a crowd at Dartmouth College that during his time as vice president he traveled to Kunar Province in Afghanistan, to award a combat medal to a U.S. Navy captain who had rappelled 60 feet down a treacherous cliff to retrieve a fallen comrade’s body.

Poised to pin a silver star on the serviceman’s uniform, in Biden’s version, he stopped when the sailor told him he didn’t deserve it.

Biden added: ‘That is God’s truth, my word as a Biden.’ It was false.

The Washington Post tracked down the players in the dramatic chronicle and determined that the former vice president got the soldier’s rank and military branch wrong, along with the type of medal involved, the location and timeframe of the crucial moment, and the act of bravery that he was rewarding.

The key elements of the story were a Navy captain getting the silver star from Biden in Kunar province for an act of bravery involving rappelling.

Biden visited Afghanistan’s Kunar province in 2008, when he was still a U.S. senator, and was there when Major General David Rodriguez bestowed a bronze star on an Army enlisted man – Specialist Milez Foltz.

That is the only medal ceremony in Kunar province which comports with his telling.

But then in 2011, Biden went to Wardak province – where he did bestow a bronze star on a reluctant hero.

The recipient, Staff Sgt. Chad Workman, apparently did protest that his bravery wasn’t worthy of recognition. He had run into a burning vehicle to save a friend’s life, only to discover that his body was already ‘melting.’ 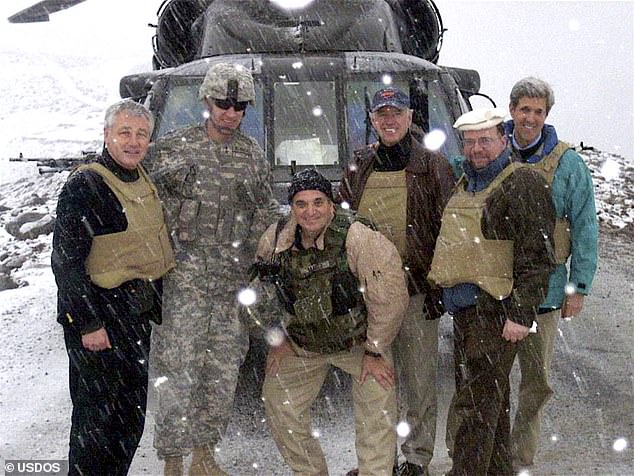 In Afghanistan: Joe Biden (third from right) was in Kunar Province in 2008, not 2011, and saw a medal ceremony – he did not pin on the medal himself. Also present were then senator Chuck Hagel (left) and John Kerry (right) and (second left) Major General David Rodriguez, who gave the bronze star to an enlisted soldier, not a Navy captain 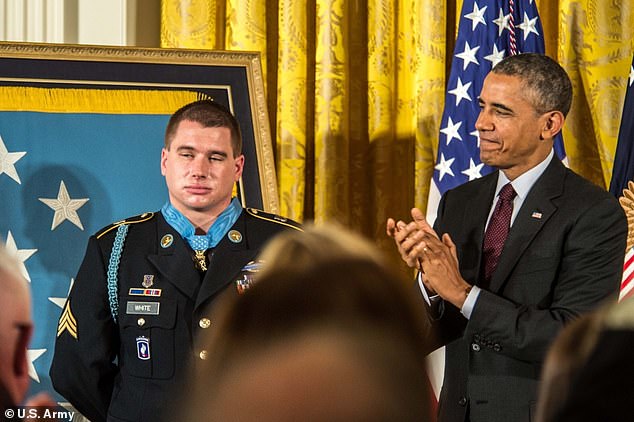 The cliff-rappelled in Biden’s story wasn’t a Navy captain; it was Army Sgt. Kyle J. White, who received the Medal of Honor from President Obama in 2014

‘I tried to get out of going’ to the medal presentation, he told the Post.

But Workman did not rappel at all, did not receive the silver star and was not in the Navy, and was enlisted, not an Army captain.

In fact the Pentagon has no record of any Army captain receiving a Silver Star during the period of time covered by Biden’s anecdote.

The daring cliffside descent in Biden’s campaign story was that of another man, Army Ranger Kyle J. White, according to the Post.

He got his medal at the White House years later – a Medal of Honor – from President Barack Obama.

That means Biden conflated at least three stories which took place over six years and threw in a change of branch and moved the hero from being enlisted to being commissioned.

Challenged on it after the Washington Post published its analysis, he told its columnist Jonathan Capehart: ”I was making the point how courageous these people are, how incredible they are, this generation of warriors, these fallen angels we’ve lost.

‘I don’t know what the problem is. What is it that I said wrong?’

If he were elected president, Biden would be 82 years old when he finished his first term.

He has told fictionalized versions of his hero’s tale before, during a 2016 World War II commemoration in Australia and later that year during a campaign speech in support of then-presidential-nominee Hillary Clinton.

In Australia’s retelling, a navy captain ‘climbed down about 200 feet’ to rescue his fellow serviceman.

On the campaign stump for Clinton, the gallant daredevil was an Army captain who made the mad dash for his compatriot in a burning car.

‘He died. He died, Mr. Vice President,’ Biden recalled hearing from the Army officer, ‘I don’t want the medal.’