The 30-year-old Yankees slugger drove a 1-1 slider from Texas right-hander Jesús Tinoco into the first row of seats in left field when leading off the second game of New York’s day-night doubleheader.

After No. 99 took a smooth, mighty swing, he had a wide smile on his face as he rounded the bases and his Yankees teammates streamed out of the dugout to celebrate with him. They stayed away from home plate, letting Judge step on it before sharing hugs and high-fives.

However, Judge’s teammates weren’t the only ones congratulating the new record-holder, with many celebrities and high-profile figures honoring the six-foot-seven inches, 282-pounds outfielder on Twitter.

‘Congratulations to Aaron Judge and his family on Aaron’s historic home run number 62! It has definitely been a baseball season to remember,’ tweeted Roger Maris Jr, the son of Yankees legend Roger Maris, who was the previous record holder with 61 home runs until Judge tied it last week against the Toronto Blue Jays.

Roger Maris Jr, the son of Yankees legend Roger Maris, who was the previous record holder with 61 home runs until Aaron Judge tied it last week against the Toronto Blue Jays, tweeted the Yankees’ No. 99 after overtaking his father’s record 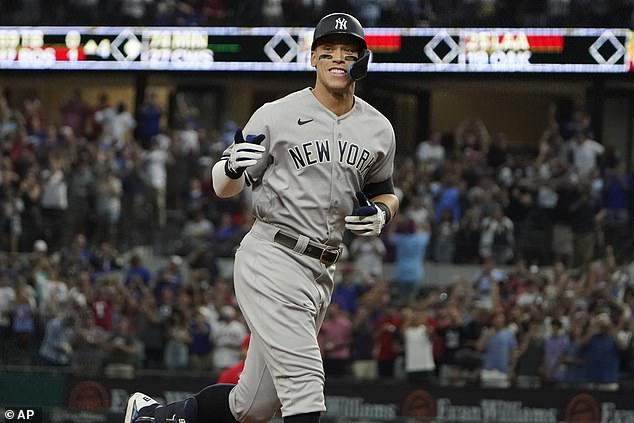 Judge gestures as he rounds the bases after hitting a solo home run, his 62nd of the season, during the first inning in the second baseball game of a doubleheader against the Texas Rangers in Arlington, Texas. With the home run, Judge set the AL record for home runs in a season, passing Roger Maris 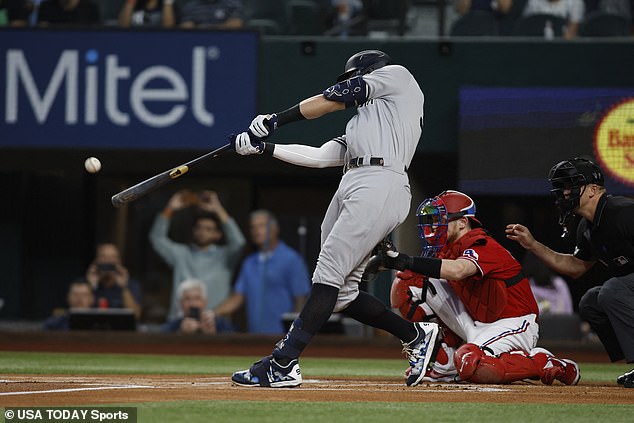 THE MOMENT ALL OF NEW YORK’S BEEN WAITING FOR: Judge hits his 62nd home run to break the American League home run record in the first inning against the Texas Rangers at Globe Life Field

Maris Jr was in the stands along with Judge’s mom for the occasion.

‘You are all class and someone who should be revered. For the MAJORITY of the fans, we can now celebrate a new CLEAN HOME RUN KING!!,’ Maris Jr further wrote on social media.

‘Number 62! Congratulations to @TheJudge44 – keep making history for New York City,’ NYC Mayor Eric Adams posted along with a picture of No. 99.

‘Congratulations @TheJudge44 on number 62! Thanks for giving baseball fans everywhere a thrilling season, and sending my best for October,’ 42nd US President Bill Clinton shared in a tweet ahead of the postseason, starting Friday.

‘What a thrill to see Aaron Judge make history…Congratulations!!! 6️⃣2️⃣,’ Paul O’Neill, who won three World Series with the Yankees between 1993 and 2021 before retiring and becoming a YES Network broadcast, tweeted. 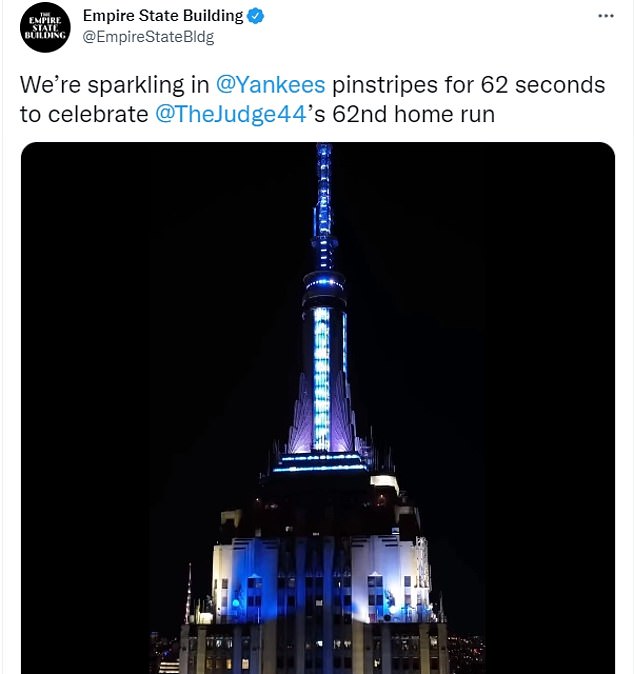 Athletes across all American sports, including several Yankees legends, and NFL quarterback Patrick Mahomes congratulated Judge for the new MLB milestone on Twitter as soon as he scored

‘Hard not to root for Aaron Judge … has done everything in 2022 with class and dignity… he’s just what baseball and the @Yankees need,’ former Cubs, Blue Jays and Brewers pitcher Dan Plesac said.

‘Congrats on #62 … not suppose to root for teams or players BUT I’ve been rooting for him and that I’m not afraid to admit. #AllRise .62⚾️,’ he added.

‘ALL RISE – Congratulations on making history, @TheJudge44,’ the Brooklyn Nets tweeted along with a video of point guard Kyrie Irving describing the Yankees No. 99 as ‘special’.

‘Congrats @TheJudge44 on 62! Postseason next!!!, Derek Jeter, who played his entire 20-year MLB career with the Yankees, wrote. 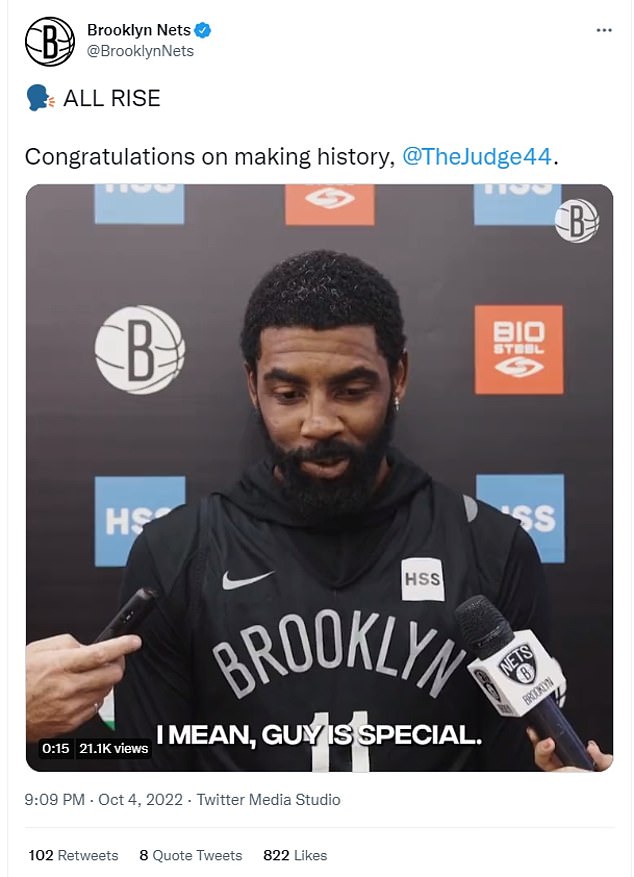 Judge’s mother and father were in the stands to see Judge end a five-game homerless streak, including Game 1 of the doubleheader when he was 1 for 5 with a single.

Maris’ 61 for the Yankees in 1961 had been exceeded six times previously, but all were tainted by the stench of steroids. Mark McGwire hit 70 for the St. Louis Cardinals in 1998 and 65 the following year. Barry Bonds hit an MLB-record 73 for the San Francisco Giants in 2001, and the Chicago Cubs’ Sammy Sosa had 66, 65 and 63 during a four-season span starting in 1998.

McGwire admitted using banned steroids, while Bonds and Sosa denied knowingly using performing-enhancing drugs. Major League Baseball started testing with penalties for PEDs in 2004, and some fans — perhaps many — until now have considered Maris as holder of the legitimate record. 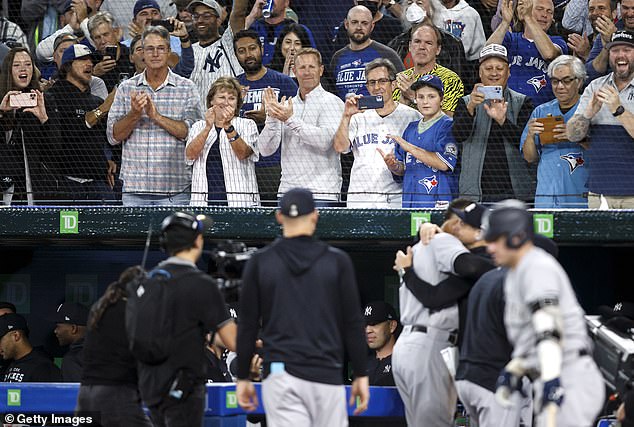 Roger Maris Jr. and Patty Judge applaud from the crowd as Judge celebrates with manager Aaron Boone after hitting his 61st home run of the season in the first inning against the Toronto Blue Jays at Rogers Centre on September 28, 2022 in Toronto, Ontario, Canada. That’s when Judge tied Roger Maris for the American League record before Tuesday night’s achievement