Former Vice President Joe Biden has selected former Sen. Chris Dodd as a key member of his committee that will select a female running mate, despite allegations about the Connecticut senator’s conduct involving a woman at a D.C. restaurant with Sen. Ted Kennedy in the 1980s.

Biden, who has announced that his running mate will be a woman, revealed his search committee a day after picking up the endorsement of former Secretary of State Hillary Clinton.

He has come under fire for not yet issuing a public comment on sexual assault allegations by former Senate aide Tara Reade. His campaign has furiously denied the allegations, which it says are untrue.

Dodd served in the Senate from 1981 to 2001, where he helmed the Senate Banking and Financial Services Committee and helped author the Dodd-Frank legislation that bares his name. He has known Biden for decades.

He also developed a close friendship with the Massachusetts Sen. Ted Kennedy, and the two men became the subjects of reporting about alleged alcohol-fueled conduct.

Senator Christopher Dodd (D-CT), pictured with Joe Biden in 2005, is helping lead a search committee for a Biden running mate

A story by the late Michael Kelly published in GQ in 1990 included allegations about a drunken encounter alleged to have involved the two men long before the arrival #MeToo movement would tarnish the reputations of many powerful men.

Kelly reported that a waitress confirmed the details of the ‘waitress sandwich’ story, which was originally published in Penthouse.

According to the story, the men were finishing up a long dinner in a private room at the D.C. restaurant La Brasserie and were ‘drunk.’ 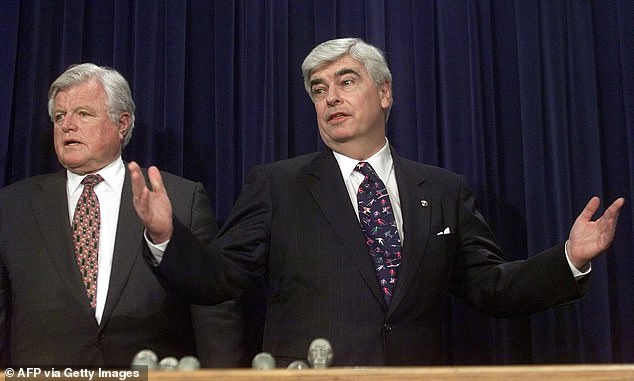 Dodd was close friends with the late Sen. Ted Kennedy, and the two were allegedly involved in an incident at a D.C. restaurant where a waitress said Kennedy jumped on top of her and threw her in Dodd’s lap

‘Their dates, two very young blondes, leave the table to go to the bathroom. (The dates are drunk too),’ according to the article.

‘As Gaviglio enters the room, the six-foot-two, 225-plus-pound Kennedy grabs the five-foot-three, 103-pound waitress and throws her on the table. She lands on her back, scattering crystal, plates and cutlery and the lit candles. Several glasses and a crystal candlestick are broken. Kennedy then picks her up from the table and throws her on Dodd, who is sprawled in a chair. With Gaviglio on Dodd’s lap, Kennedy jumps on top and begins rubbing his genital area against hers, supporting his weight on the arms of the chair,’ according to the story.

‘As he is doing this, Loh enters the room. She and Gaviglio both scream, drawing one or two dishwashers. Startled, Kennedy leaps up. He laughs. Bruised, shaken and angry over what she considered a sexual assault, Gaviglio runs from the room. Kennedy, Dodd and their dates leave shortly thereafter, following a friendly argument between the senators over the check.’

According to Kelly, Carla Gaviglio declined to be quoted but said the story or the initially reported version was full and accurate.

Dodd once dated ‘Star Wars’ actress Carrie Fisher, who had her own account of an alleged interaction involving Dodd and Kennedy. Fisher described the blind date with Dodd in her memoir.

‘So, do you think you’ll be having sex with Chris at the end of your date?’ she says Kennedy asked her. Dodd looked at her with ‘an unusual grin hanging on his very flushed face,’ according to her account.

Fisher brushed off the crude remark. ‘I’d have to be truly loaded to just fall into bed with someone I’ve only recently met. Even if that someone is a Democrat,’ she wrote, according to a Washington Post account of her description of the date.

Dodd’s appointment comes at a time when Biden himself is under scrutiny, having survived accusations during the campaign from women who said he touched their neck and hair in ways that made them uncomfortable.

Biden’s campaign has called Reade’s allegations, that he forced himself on her in 1983 and penetrated her with his fingers, ‘untrue.’ She did not make that claim a year ago when she said Biden had made her uncomfortable but without raising the assault allegation.

According to the Biden campaing, Dodd ‘has been a longtime friend and colleague of Vice President Biden for almost forty years.’

He helped push Obamacare through Congress and ‘has a long history of foreign affairs experience serving with then-Senator Biden on the Foreign Relations Committee for three decades.’

Dodd also is ‘no stranger to the importance of the upcoming election, having both served as the General Chairman of the Democratic National Committee during the reelection of Bill Clinton, and having coauthored landmark election reform legislation after the controversial 2000 election.’

Among the possible contenders as his running mate are Sens. Kamala Harris of California, Stacey Abrams of Georgia, Sen. Elizabeth Warren of Massachusetts, and Gov. Gretchen Whitmer of Michigan.