Joe Biden has said that if he becomes president in this year’s election, he would need to appoint a vice president capable of taking over the job at a moment’s notice in case he dies while in office.

‘I can think of at least eight women, at least four or five people of color, that I think are totally qualified to be vice president of the United States,’ the former vice president said during a campaign event in Clinton, Iowa.

‘But for me, it has to be demonstrated that whoever I pick is two things: One, is capable of being president because I’m an old guy,’ the 77-year-old Biden said.

Democratic presidential candidate Joe Biden, 77, admitted he’s an ‘old guy’ during a campaign event. He says he needs to choose a VP who can lead the country in the event he dies

‘No, I’m serious. Look, I thank God I’m in great health. I work out. No, I’m serious. You know, I work out every morning. I’m in good shape — knock on wood, as my mother would say,’ Biden said during a question and answer session as reported by the Washington Examiner.

‘I released all my medical records,’ Biden added. ‘But you never know. You never know what’s going on. And I’m sure what would happen is I have — some people looking would say, ‘Is the person Biden picked capable of, God forbid something happened to Biden, that they would be able to take over immediately?’

Biden’s reference about his age came after a man in the crowd asked if he would pick Senator Kamala Harris to be his VP. 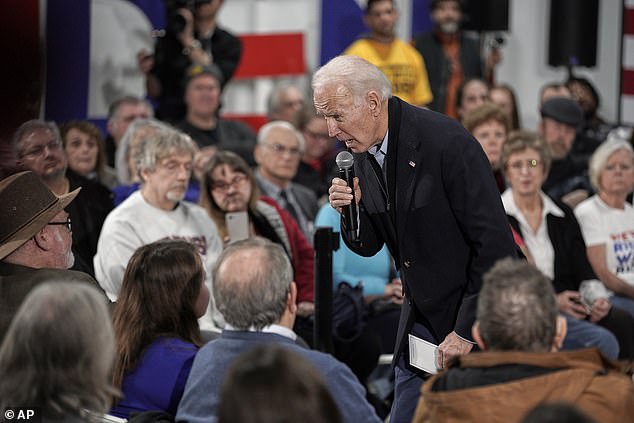 Biden, 77, said ‘you never know what might happen in the future’ during an Iowa campaign stop 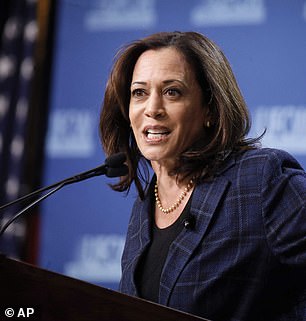 ‘I think Kamala Harris has the capacity to do just about anything, along with a lot of other people. I think she is bright as can be,’ Biden said. Harris, pictured, dropped out of the race to be president in December

‘I think Kamala Harris has the capacity to do just about anything, along with a lot of other people. I think she is bright as can be,’ Biden said.

‘She can do anything from the court to being attorney general to being vice president to being a cabinet member to staying in the Senate.’

Harris dropped out of the race to be president in December.

If Biden manages to reach the White House, he would be the oldest president elected.

President Ronald Reagan was 77 when he left office in 1989.

If Senator Bernie Sanders, who is 78, or former New York City Mayor Michael Bloomberg, who is 77 are able to win the election, then they too would also be the oldest president elected into office.

In December, Barack Obama’s former physician said Joe Biden ‘is not a healthy guy’ after Biden released a doctor’s letter claiming he is ‘fit to be president’. 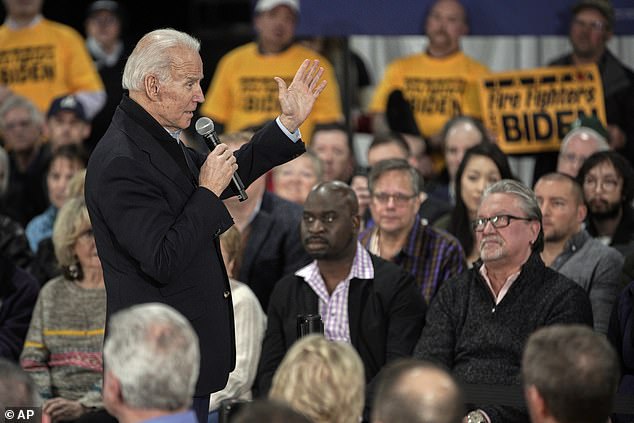 If elected to the presidency he would be the oldest president in U.S. history and would be 78-years-old by Inauguration Day

Dr David Scheiner, 81, said he is worried about Biden’s risk of a stroke after the letter disclosed he is taking cholesterol medication and has an irregular heartbeat, having previously suffered aneurysms. 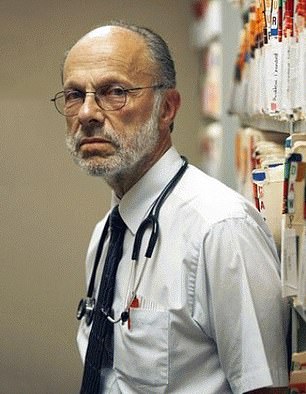 Dr Scheiner said an MRI or CT scan should have been included with the Biden’s health report, but wasn’t

Dr Scheiner, who treated Obama for 22 years before he became president, added that he would like to see the results of an MRI or CT scan, which were not included.

‘Could I guarantee he won’t have issues for the next four years? He has a lot of issues that are just sort of sitting there.’

According to the doctor’s report released last month, Biden is ‘healthy, vigorous’ and ‘fit to successfully execute the duties of the Presidency.’

Dr. Kevin O’Connor, who has been Biden’s primary care physician since 2009, wrote in a three-page note that the Democratic presidential candidate is in overall good shape – he’s trim, exercises and keeps his cholesterol at healthy levels with the use of a statin medication.

Since 2003, Biden has had episodes of atrial fibrillation, a type of irregular heartbeat that’s potentially serious but treatable.

His doctor now describes the atrial fibrillation as ‘persistent.’ O’Connor cited a list of tests that show the candidate’s heart is functioning normally and his only needed care is a blood thinner to prevent the most worrisome risk, blood clots or stroke.

AGES OF THE 2020 CANDIDATES ON INAUGURATION DAY

As of January 2, 2020 there were 17 declared major party candidates in the 2020 presidential election, including 14 Democrats and three Republicans.

Here is the age each of them would be on Inauguration Day 2021 if he or she were to win: