BREAKING NEWS: Joe Biden named in list of Obama officials who got intelligence reports that ‘unmasked’ Mike Flynn in last days of administration

Former Vice President Joe Biden has been identified as among 16 Obama administration officials who had access to information after Gen. Mike Flynn was ‘unmasked’ in U.S. intelligence reporters.

A National Security Agency document signed by Director Gen. Paul Nakasone identifies Biden as among a group of officials who may have received information on Flynn in the final days of the Obama administration or were otherwise involved in his unmasking.

The document, obtained by the Washington Examiner, does not reveal which official or officials ordered Flynn’s name be ‘unmasked’ from intelligence reports. U.S. citizens have their names blacked out in such reports, although certain officials have the authority to unseal the information.

A National Security Agency document identifies Joe Biden as among a group of officials who may have received information on ‘unmasking’ of Mike Flynn in the final days of the Obama administration.

In Biden’s case, he gained access to the documents on January 12, 2016 – a little over a week before he left office.

He is listed among a group of ‘recipients who may have received Lt. Gen. Flynn’s identity in response to a request processed between 8 November 2016 and 31 January 2017’ to unmask an identity to unmask a name in an NSA intelligence report.

But the memo also refers to Biden as among a group of ‘principals’ – although it still stops short of confirming he ever saw the information.

‘While the principals are identified below, we cannot confirm they saw the unmasked information. This response does not include any requests outside of the specified time-frame,’ according to the memo. 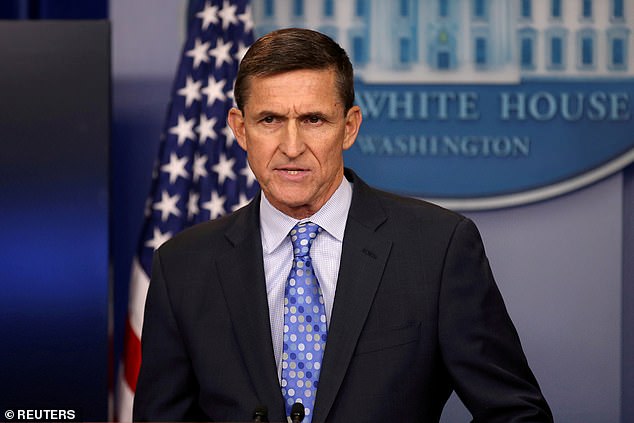 Flynn’s conversations with Russia’s ambassador to the U.S. got picked up by U.S. intelligence

Flynn’s calls with former Russian ambassador to the U.S. Sergey Kislyak got picked up by U.S. intelligence intercepts during the transition.

Flynn would later plead guilty to lying to the FBI about his undisclosed Russia contacts – although the Justice Department last week took the extraordinary move of seeking to drop the case. A federal judge is awaiting ‘friend of the court’ documents relating to the controversial case.

Each individual was an authorized recipient of the original report and the unmasking was approved through NSA’s standard process, which includes a review of the justification for the request,’

The memo was ordered declassified by acting Director of National Intelligence Ric Grenell.

Grenell provided the information to Iowa Republican Sen. Charles Grassley and Wisconsin GOP Sen. Ron Johnson for their ‘situational awareness.’ He says he issued the order May 8 of this year. Trump named Grenell to his post in February.

‘I knew nothing about those moves to investigate Michael Flynn,’ Biden said when asked about Flynn’s prosecution on ABC’s ‘This Week’ Sunday.