Joe Scarborough has paid emotional tribute to former aide Lori Klausutis, who died in his Florida office back in 2001.

In recent weeks, President Trump has repeatedly claimed that Scarborough was responsible for murdering the 28-year-old staffer – despite officials ruling she suffered from an undiagnosed heart problem that caused her to collapse and hit her head on a desk.

In a segment on MSNBC’s Morning Joe Wednesday, Scarborough slammed Trump for ‘sullying’ Klausutis’ name by insinuating that he was somehow responsible for her death.

Speaking with former Senator Claire McCaskill, Scarborough remembered Klausutis as a devoted Catholic who came to work for him because she wanted to ‘give back to the country that she loved’.

Scarborough served as a Republican congressman for the 1st district of Florida  between 1995 and 2001.

Joe Scarborough has fought back tears paying tribute to former aide Lori Klausutis, who died in his Florida office back in 2001. He spoke about the late staffer with former Sen. Claire McCaskill

‘I think Americans should know about all of this,’ Scarborough stated Wednesday as he finally addressed Trump’s claims about Klausutis. 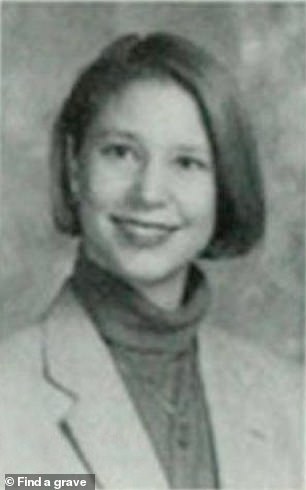 ‘I didn’t know Lori well. She worked in an annex office… I met her a couple of times at a couple of public events. But after she passed away [her widower] T.J. told me that she was working in a bank… and she was a lifelong Republican and a faithful Catholic… and she decided she wanted to work in something bigger than herself,’ he stated.

‘I’ve thought about this. A good woman, a young woman’s desire to do something good for the country that she loved… and now the President of the United States is sullying this good woman’s name.’

‘It is heartbreaking, the cruelty is unspeakable,’ Scarborough seethed.

The politician-cum-TV host conceded that rumors he was involved in Klausutis’ death had been circulating for years, and were not masterminded by Trump.

Scarborough described those who asserted the claims as ‘vile people driven by hatred and petty politics thinking that they were going to hurt me’.

‘Your attacks pass through me and they terrorize a family that has not been able to let their loved one rest in peace!’ he stated.

The TV host continued: ‘Enough! Let this poor woman rest in peace and let her family finally be able to move on with their lives, 19 years later.’

However, minutes after the broadcast, Trump doubled down on his wild claims that Scarborough was somehow responsible for the aide’s untimely death.

‘Psycho Joe Scarborough is rattled, not only by his bad ratings but all of the things and facts that are coming out on the internet about opening a Cold Case. He knows what is happening!’ the Commander-in-chief wrote.

Trump’s newest tweet prompted fellow Republican Mitt Romney to weigh in. He condemned the Commander-in-chief’s accusations as ‘vile’ and ‘baseless.’

‘I know Joe Scarborough. Joe is a friend of mine,’ Romney wrote. ‘I don’t know [Lori’s widower]  T.J. Klausutis. Joe can weather vile, baseless accusations but T.J.? His heart is breaking. Enough already.

Meanwhile, Scarborough also addressed Trump’s accusations in a post on Twitter, after his wife and co-host Mika Brzezinski pushed the site’s CEO to change its policies to ban Trump from making the outlandish claims. 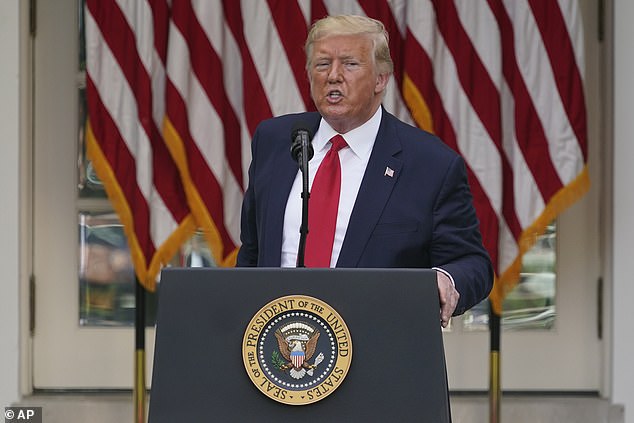 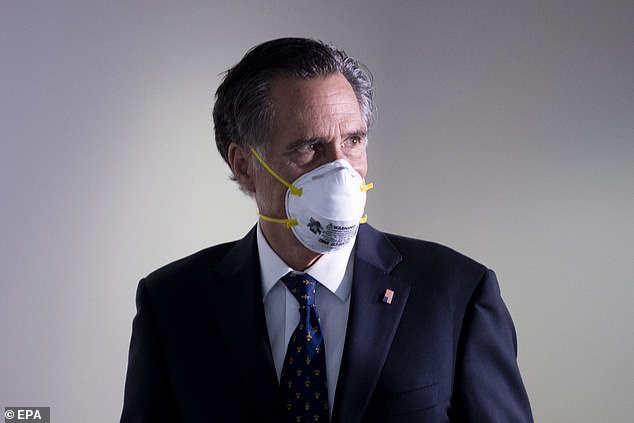 ‘As much as I have appreciated the kindness shown by old friends and colleagues today, I assure you that my family is incredibly blessed and asks only that you pray for Lori’s family tonight. May God also soften the hearts of those who continue to slander this good woman’s memory,’ Scarborough tweeted Wednesday.

He also posted a quote from an LA Times editorial which read: ‘The solution in this case is simple: Delete the demonstrably false tweets — which clearly violate Twitter’s own policies — and allow the family of Klausutis its privacy and its dignity’.

Trump’s renewed attack came after he kept up his intimation Tuesday that Scarborough murdered Klausutis.

The president was asked about a series of tweets that shared a conspiracy theory about Scarborough being responsible for the staffer’s death.

‘A lot of people suggest that,’ Trump said late Tuesday afternoon in the White House Rose Garden. ‘And hopefully someday people are going to find out,’ he continued, calling it a ‘very suspicious situation.’

A reporter then asked Trump if he had seen the letter written by Lori Klausutis’ widower Timothy, which begged Twitter CEO Jack Dorsey to remove the president’s tweets because they were hurtful to the late aide’s family members.

‘Yeah, I have,’ Trump said of the letter. ‘But I’m sure ultimately they want to get to the bottom of it and it’s a very serious situation.’ 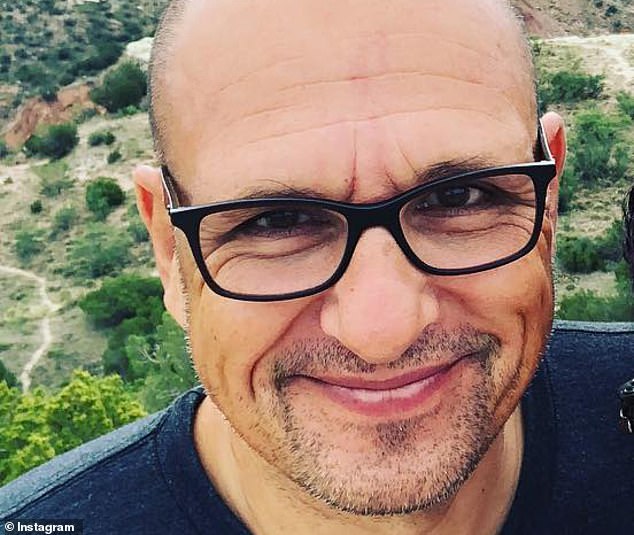 Timothy Klausutis (pictured), the husband of the late Lori Klausutis, has asked Twitter’s CEO Jack Dorsey to remove President Trump’s tweets that allege she was murdered by her boss Joe Scarborough, the host of MSNBC’s ‘Morning Joe’

‘In 2003, on Don Imus’ show, it was Don Imus and Joe Scarborough that joked about killing an intern, joked and laughed about it,’ McEnany said.

Scarborough, a former Republican, and Brzezinski, who’s more politically liberal, were friends with Trump, but had a falling out, and are among his most vocal critics.

They’ve been especially critical of the president’s response to the coronavirus pandemic, which has left nearly 100,000 Americans dead. They’ve also chided Trump for touting hydroxychloroquine, which remains an unproven remedy for COVID-19.

Mika Brzezinski took to Twitter and said White House press secretary Kayleigh McEnany was lying about Joe Scarborough making a joke about a dead intern. The clip shows Don Imus making the joke, but it sounds as if Scarborough laughed 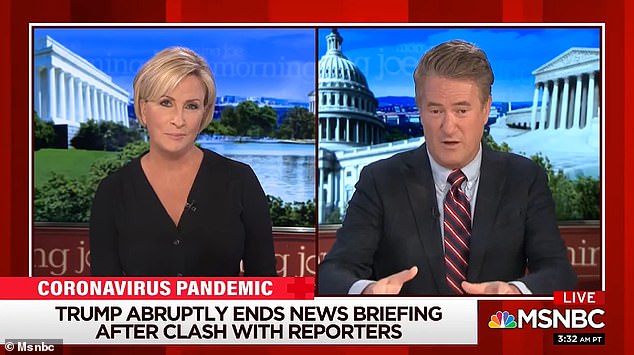 Joe Scarborough (right), with his wife and co-host Mika Brzezinski (left), served in Congress as a Republican, but has become a vocal critic of President Trump. In recent weeks, Trump has tweeted a conspiracy theory about Scarborough murdering an aide

On Tuesday afternoon, Brzezinski took to Twitter to push back on McEnany’s assertion that Scarborough was laughing about the death of an intern.

‘The Press Secretary is lying. IMUS made the callous joke in 2003 during a break and then repeated it on air. Joe was embarrassed and said, ‘What are you going to do?’ trying to move on to talk about the show,’ Brzezinski wrote. ‘No lies can cover up the hatefulness of Donald Trump,’ she added.

A clip from the back-and-forth shows Imus originating the joke, but it sounds like Scarborough laughed.

‘Donald Trump has no decency and refuses to show a trace of humanity toward a grieving widower,’ Brzezinski also tweeted. ‘No lies can deflect the awfulness of his behavior. History will judge harshly those who defend this cruelty and callousness.’

Twitter had already refused to take down Trump’s tweets on the topic after Klausutis’ widow sent them a letter.

‘We are deeply sorry about the pain these statements, and the attention they are drawing, are causing the family,’ the spokesperson said. ‘We’ve been working to expand existing product features and policies so we can more effectively address things like this going forward, and we hope to have those changes in place shortly.’ 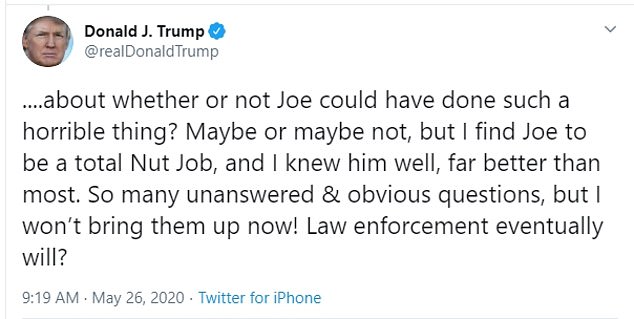 President Trump continued to tweet about Lori Klausutis’ death on Tuesday, again suggesting that Joe Scarborough may have been behind her death 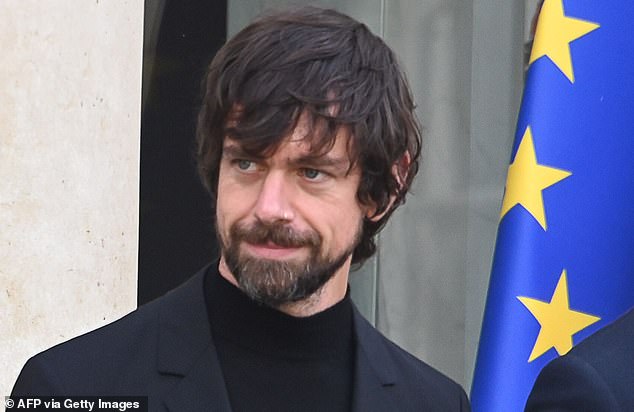 Timothy Klausutis wrote to the CEO of Twitter Jack Dorsey (pictured), but a Twitter spokesperson said Tuesday that the site would not be pulling Trump’s tweets

Nearly 19 years ago, my wife, who had an undiagnosed heart condition, fell and hit her head on her desk at work. She was found dead the next morning. Her name is Lori Kaye Klausutis and she was 28 years old when she died. Her passing is the single most painful thing that I have ever had to deal with in my 52 years and continues to haunt her parents and sister.

I have mourned my wife every day since her passing. I have tried to honor her memory and our marriage. As her husband, I feel that one of my marital obligations is to protect her memory as I would have protected her in life. There has been a constant barrage of falsehoods, half-truths, innuendo and conspiracy theories since the day she died. I realize that may sound like an exaggeration, unfortunately it is the verifiable truth. Because of this, I have struggled to move forward with my life.

The frequency, intensity, ugliness, and promulgation of these horrifying lies ever increases on the internet. These conspiracy theorists, including most recently the President of the United States, continue to spread their bile and misinformation on your platform disparaging the memory of my wife and our marriage. President Trump on Tuesday tweeted to his nearly 80 million followers alluding to the repeatedly debunked falsehood that my wife was murdered by her boss, former U.S. Rep. Joe Scarborough. The son of the president followed and more directly attacked my wife by tweeting to his followers as the means of spreading this vicious lie. I’m sure you are aware of this situation because media aroundthe world have covered it, but just in case, here it is:

‘When willthey open a Cold Case on the Psycho Joe Scarborough matter in Florida. Did he get away with murder? Some people think so. Why did he leave Congress so quietly and quickly ? Isn’t it obvious? What’s happening now? A total nut job!’ – President Trump

”Concast’ should open up a long overdue Florida Cold Case against Psycho Joe Scarborough. I know him and Crazy Mika well used them beautifully in the last Election, dumped them nicely, and will state on the record that he is ‘nuts’.Besides, bad ratings!’ – President Trump

‘What show is Joe going to go on to discuss Lori Klausutis?’ – Donald Trump Jr.

My request is simple: Please delete these tweets.

I’m a research engineer and not a lawyer, but reviewed all of Twitter’s rules and terms of service. The President’s tweet that suggests that Lori was murdered without evidence (and contrary to the official autopsy) – is a violation of Twitter’s community rules and terms of service. An ordinary user like me would be banished from the platform for such a tweet but I am only asking that these tweets be removed.

I am now angry as well as frustrated and grieved. I understand that Twitter’s policies about content are designed to maintain the appearance that your hands are clean you provide the platform and the rest is up to users. However, in certain past cases, Twitter has removed content and accounts that are inconsistent with your terms of service.

I’m asking you to intervene in this instance because the President of the United States has taken something that does not belong him — the memory of my dead wife and perverted it for perceived political gain. I would also ask that you consider Lori’s niece and two nephews who will eventually come across this filth in the future. They have never met their Aunt and it pains me to think they would ever have to ‘learn’ about her this way.

Thank you for your consideration.

I look forward to hearing from you soon.