Joe Swash has admitted he is feeling ‘broody’ and would like to have more children with girlfriend Stacey Solomon.

The actor, 38, has Harry, 13, from a previous relationship and Rex, 18 months, with partner Stacey told how he would love another baby because his youngest child is growing up so quickly.

While Stacey is also mother to sons, Zach, 12, and eight-year-old Leighton, Joe told new! magazine they don’t care if they have another boy or a girl.

Future: Joe Swash has admitted he is feeling ‘broody’ and would like to have more children with girlfriend Stacey Solomon

He said: ‘I’d like to add one more to our brood. It wouldn’t hurt. But it’s not all my decision. Stacey’s got to be on board with it as well. You never know.

‘It would be nice to have a girl but we’ve had such an amazing time bringing up our boys that it really wouldn’t matter to us if it was a boy or a girl.

‘It’s just these kids grow up so fast. Even Rex grew out of that baby phase so fast and now he’s running around like a toddler. You do get a bit broody and think, “Aaaah I want a baby back.”‘

Joe previously said Stacey has already planned out every aspect of their wedding even though they’re not even engaged, but he insisted he wants to choose her ring himself when the time comes. 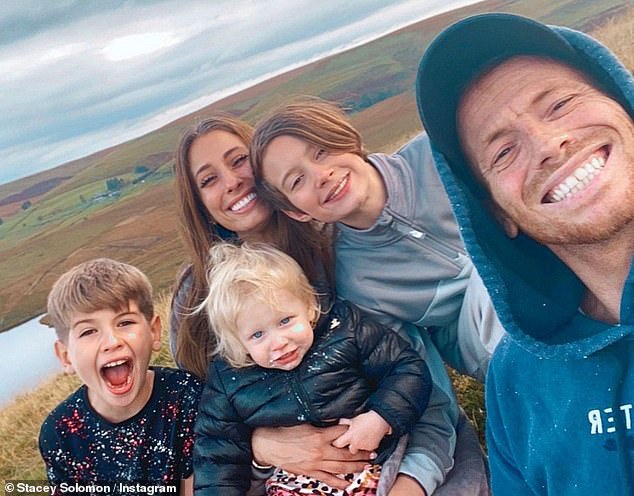 Family: Joe has Harry, 13, from a previous relationship and Rex, 18 months, with partner Stacey told how he would love another baby because his youngest child is growing up so quickly (pictured with Stacey’s children Zach, 12, and Leighton, 8)

The actor said he wants to work out how the ring would look, adding it would ‘quite a fun part’ of the wedding process.

However, the former EastEnders star isn’t completely confident in his choices, joking he would keep the receipt.

It comes after Joe admitted he missed ‘quite a lot’ from his son Harry’s early life because of his difficult split from his mother Emma Sophocleous.

Speaking candidly on Dave Berry’s Dadpod on Thursday, the former I’m A Celebrity winner detailed how he and his 13-year-old have been making up for lost time to the point where Harry has become Joe’s ‘shadow’. 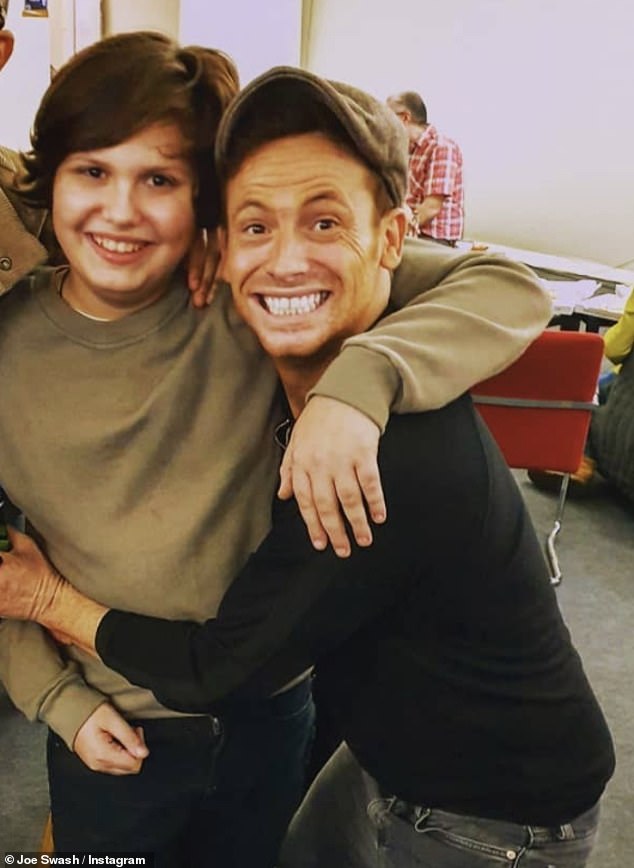 ‘I missed out on quite a lot’: Joe spoke candidly in a podcast on Thursday about building a relationship with son Harry after his difficult split from his mother

Reflecting on fatherhood, Joe said: ‘With my first child, Harry, there was a period where mine and Harry’s mum’s relationship affected my relationship with him.

‘I didn’t get to see him for a period of time, so I missed out on quite a lot. Now, me and my son Hal, we spent all the time together.

‘He’s, like, my shadow. I love him, but there was a period where I just couldn’t see this happening in the future. So, I did miss out quite a lot of Hal growing up, as a baby.’

Joe and Emma dated between 2005 and 2008, and were even engaged before their split, and the pair went to court over Harry which Joe previously said was ‘best money’ he’s ever spent. 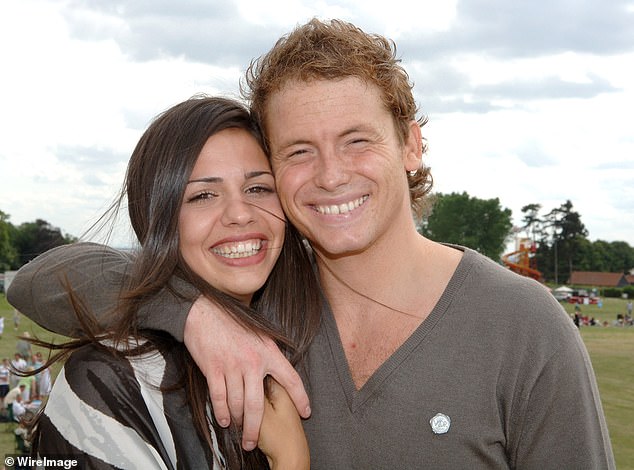 Bad break-up: Joe and Emma Sophocleous dated from 2005 to 2008, and were even engaged before their split, and Joe said ‘there was a period where [it] affected my relationship with him’

Detailing how Harry often visited him when he starred on this year’s Dancing On Ice, Joe gushed that he came ‘to every single show’ and was ‘so proud’.

‘It was the first time really that I’d done anything, and him be of the age where I can see him being proud of his dad.

‘So, it just filled me with so much joy and recently, I done the voice of one of Thomas the Tank Engine’s friends and my little Rex was watching it, and he definitely noticed.

‘So, yeah, it’s lovely. I really hope they are proud. I hope they don’t get embarrassed, you know what I mean, because there are a few things out there that could be embarrassing.’ 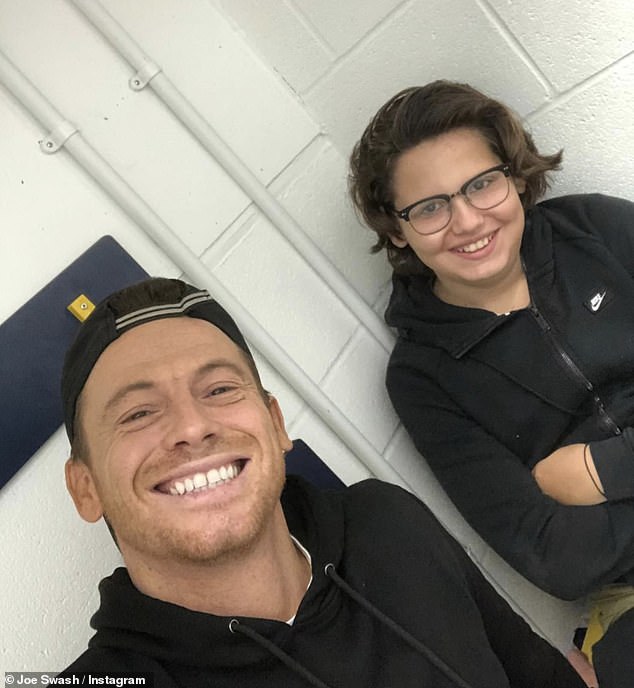 Father and son: Reflecting, Joe said: ‘I didn’t get to see him for a period of time, so I missed out on quite a lot. Now, me and my son Hal, we spent all the time together’

Joe also spoke more about potentially expanding his family on the podcast after looking back at photos of Rex since he was born.

‘I look at photos of Rex, like, literally a year ago, and he was a tiny, tiny little baby and it just goes so fast. And now, he’s like a little terror,’ he explained.

‘He’s up and down the stairs. He’s in the cupboards. He knows where the chocolates are hidden. Like, he is on it. He’s like a little grown-up. So, it goes so fast.

‘Yeah, I’m really starting to miss the baby period ’cause it does go so fast, and that is such a precious little time when the baby is first born.

‘So, yeah, I’m not gonna lie. I think I might have one more in me, you know? I’m getting a little bit broody.’

Stacey and Joe started dating in 2016 and moved in together at the end of 2018 before having their first baby together in May last year.

The former X Factor star has children Zachary with her ex Dean Cox, and Leighton with her ex Aaron Barham. 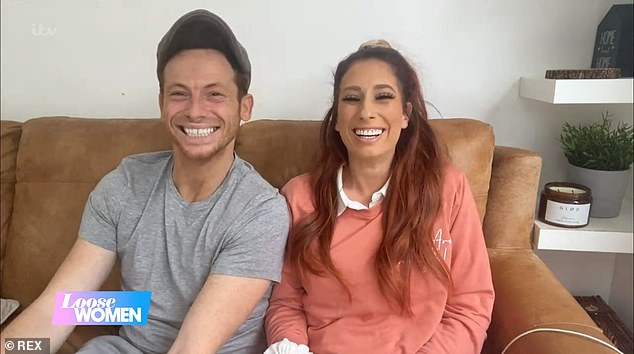 Relationship: Stacey and Joe started dating in 2016 and moved in together at the end of 2018 before having their first baby together in May last year