Joe Wicks has revealed he is engaged to Rosie Jones.

The fitness guru, known as The Body Coach, made the announcement on Instagram on Sunday as he revealed their relationship had finally made him believe in marriage.

The loved-up couple welcomed their first child, a daughter named Indie, into the world in July and Joe, 33, used a picture of the happy family as he informed fans that he’d popped the question.

Happy family: Joe Wicks has revealed he is engaged to Rosie Jones. The Body Coach, 32, made the announcement on Instagram on Sunday with a picture of the pair and their daughter

Alongside a photograph of himself and his family in Santa Monica, California, the hunky TV star wrote: ‘My little family Our 3rd wheel comes everywhere with us and we love our adventures together.

‘My Mum and Dad never got married when I was growing up and spent my whole life separating and getting back together and I always thought I didn’t believe in marriage.

‘But I now know what it means to want to stick together and to love someone enough to want to marry them. (sic)’ 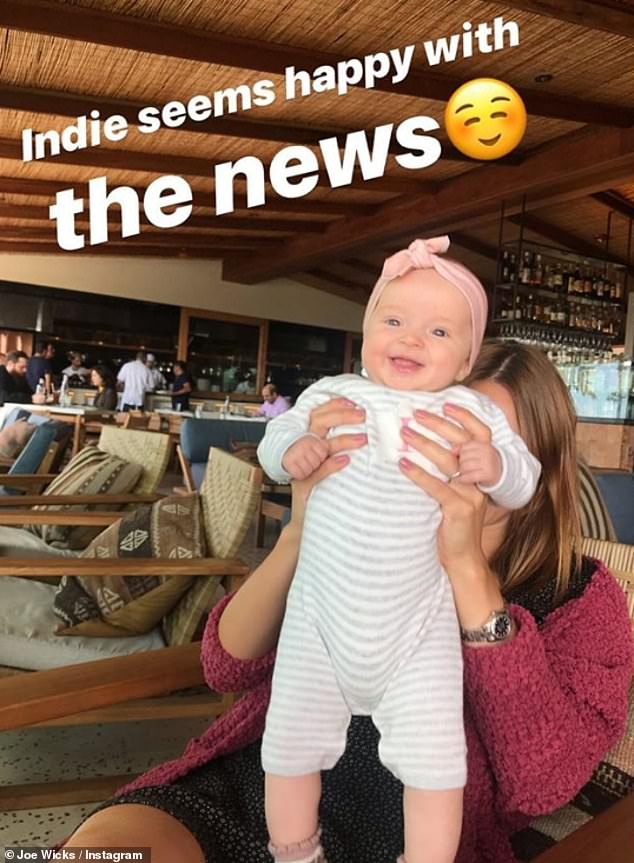 Baby love: Joe also shared a snap of their daughter after revealing the news, quipping that their little one seemed ‘happy’ with the announcement

Joe said he will always be ‘committed and loyal to Rosie and Indie’.

The fitness coach – who has presented his own health-focused show on Channel 4 – continued: ‘I asked Rosie to marry me and luckily she said yes It’s my goal in life to be committed and loyal to Rosie and Indie and always be there for them (sic)’

Joe and Rosie, 27, – who is a former glamour model – have made a concerted effort to keep their relationship low-key since they started dating.

But the TV presenter recently described the brunette beauty as ‘the one’.

Speaking last year on Loose Women, Joe also broke his silence on his then ninth-month romance with the beauty, as he shared: ‘I’ve got my Snapchat and Instagram stories going off all day but in terms of me and my girlfriend, we have a very normal life, her name is Rosie.

‘She does a little bit of cooking, but I do most of the cooking. We go on holiday together and will post pictures online but not of each other, because we want it to be something for us.’

Talking about how he wanted to find love away from online dating, he told Fabulous magazine in July 2016: ‘I like to get to know people through friends, rather than meet a complete random. I’m a relationship guy and the world of dating scares me a bit.

Before his current squeeze, Joe admitted that his hectic schedule played a part in his break up with his former flame. He said: ‘We just grew apart. But we’re still really good friends. There was no nastiness.’