Joel Osteen, the multi-millionaire televangelist, is opening the doors of his Lakewood Church in Houston to flood victims from Tropical Depression Imelda.

Osteen was criticized when Hurricane Harvey barreled through in 2017 for failing have his church open quick enough for those in need in the aftermath of that brutal storm.

But no delay this time as the church posted on its Twitter account Thursday that it is ‘open to anyone is need of assistance because of the flooding.’

The megachurch was heavily criticized n 2017 when Joel Osteen said the church wasn’t closed during the monster category 4 Hurricane Harvey and victims would receive aid, the Houston Chronicle reported.

But he later said that the church dealt with flooding, which delayed its opening to the public.  After that, the Chronicle reported, the Lakewood Church helped more than 1,150 Houston-area families rebuild their destroyed homes.

In addition, the church donated in excess of $5 million for financial assistance, gathered 9,300 volunteers and distributed at least 1,000 pallets of supplies as families dealt with the storm’s aftermath. 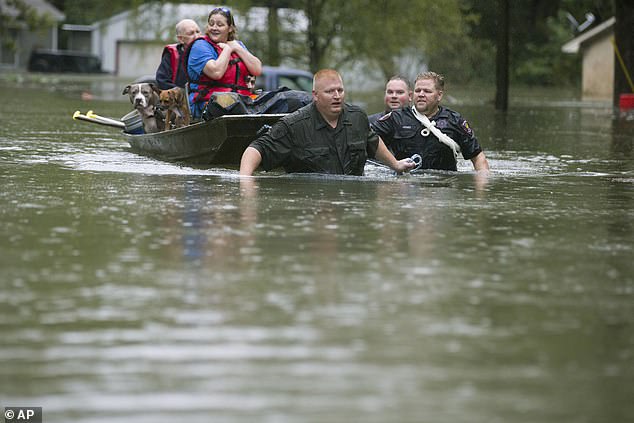 Police rescue a family by row boat in Texas, as Joel Osteen is providing assistance to Tropical Depression Imelda victims

Parts of Texas are measuring the flooding waters in feet from Imelda.  Just east of Houston, authorities in Jefferson County said some localized spots registered at least 40 inches of rain in three days. 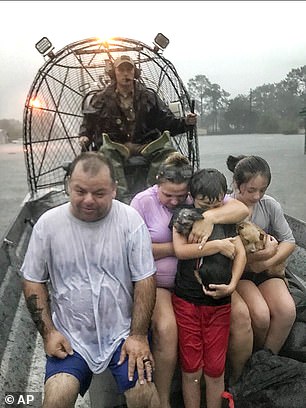 A family rescued by flood water in Texas. The Lakewood Church in Houston is opening its doors to hep victims

‘The Flash Flood Emergency has been continued and expanded,’ the National Weather Service office in Houston told USA Today. ‘This is an incredibly dangerous, life-threatening situation.’

Police said three people sustained minor injuries when the flat roof of a post office facility in Houston collapsed amid the deluge.

Making matters worse, the storms brought gusting winds of up to 50 mph. The National Weather Service said the swollen ground cause many trees to get knocked over.