He’s believed to have been dating the model for nearly a year, after they were first pictured putting on a cosy display in May last year.

And Joey Essex’s budding relationship with his girlfriend Lorena Medina appears to be hotting up as the couple enjoyed a PDA-filled outing on the beach in Miami last week.

The former TOWIE star, 29, couldn’t keep his hands off the American model, 27, as they kissed and cuddled throughout their time on the sandy shores of Florida.

Appearing head over heels in love, the media personality planted smooches on his partner’s cheek, gazed adoringly at her and swept the brunette off her feet while treating himself to some downtime.

The reality star displayed his toned upper body and washboard abs in a pair of £570 navy shorts by Louis Vuitton, and protected his eyes from the sun in skinny rectangle-shaped shades.

The social media sensation complemented her beauty with light touches of neutral-toned make-up, while decorating her dark tresses with a yellow patterned headscarf. 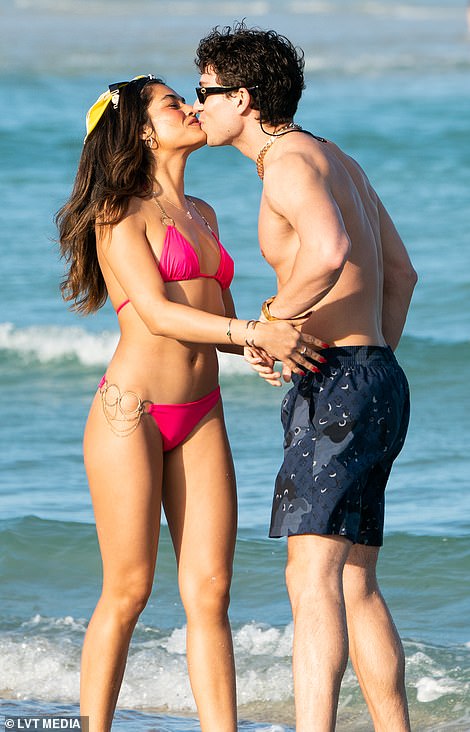 Smitten: The former TOWIE star, 29, couldn’t keep his hands off the American model, 27, as they kissed and cuddled throughout their time on the sandy shores of Florida

Similar to her beau, Lorena accessorised her look with a pair of quirky black sunglasses as she frolicked in the sea with the I’m A Celebrity star.

In October, the pair confirmed their relationship as the pair shared a romantic kiss during a dinner date at Chigwell’s Sheesh Restaurant.

In a recent interview on Loose Women, the hunk labelled the beauty ‘reem’ and confessed that things were ‘going good’ despite their long-distance romance.

He enthused: ‘It’s early days still. We met about two months ago and it’s all going good. We met in Spain. She’s actually from Mexico but she lives in LA. It’s long distance. She flies back (to the UK) and I go there sometimes.’

According to The Sun the pair met while filming X On The Beach, and have since developed a romance away from the MTV show.

They have been pictured on a number of cosy outings together since last year, both in Los Angeles and Joey’s native town, Essex.

Five Star Hotel personality Joey previously shared his plans on moving to California as he told The Sun last year: ‘In England I can’t walk down the street without a hat on. I want a fresh start in America.

‘I’m going to America soon to meet agents. I’ve been offered presenting but I don’t feel like me when I do it, all I want to do is be Joey Essex.’

His gorgeous girlfriend Lorena – who boasts 96,000 followers on Instagram – is believed to be based in Los Angeles and is signed Elite Model Management in Miami and No Ties Management in California.

The beauty has revealed she’s currently based in London on her widely-followed platform, and has appeared to forge close friendships with stars from the UK reality TV scene, including Sophie and Love Island’s Georgia Harrison.

In November 2018, Joey enjoyed a short-term romance with Love Island star Ellie Brown, with the couple confirming their widely-rumoured romance when they shared a kissing video online. It is unclear when the hunk and the former business development manager, 21, called it quits.

Joey’s most famous relationship was with his former TOWIE co-star Sam Faiers, with the two even getting engaged in 2013.

But their on/off relationship three-year came to an end for good in 2014, with Sam going on to find her current partner, Paul Knightley, with the couple have two children together – Paul, two, and Rosie, eight months.

During the turbulent relationship, Joey broke Sam’s heart in 2012 when he was spotted with a ‘mystery blonde waitress’, who turned out to be current TOWIE star Amber Turner.

After his relationship with Sam, Joey appeared on Celebs Go Dating twice, but failed to find a permanent romance.

Although, the reality star left fans shocked when he hooked up with his fellow contestant, Stephanie Pratt, during series one in 2016, but their romance fizzled out just three months later.