The larrikin MP joked that he was having a ‘mid-life crisis’ and wanted a new career outside of politics.

The New South Wales Nationals, like their senior Coalition partner, are now on their fourth leader in seven years, as they struggle to hold traditional regional seats.

Paul Toole (with partner), a former school teacher and mayor who is Nationals deputy leader,  is also eyeing a promotion

The party of the bush has now chosen a leader from west of the Great Dividing Range from the central west city of Bathurst, better known as the home Mount Panorama and V8 Supercar racing.

Mr Toole is taking over as Deputy Premier as Sydney prepares to emerge from lockdown on October 11 under a new Liberal Premier Dominic Perrottet.

‘I tell you what, I’m looking forward to getting back to work,’ Mr Toole said after the vote on Wednesday.

The new Nationals leader began teaching at Assumption Primary School in Bathurst in 1995 before joining the Evans Shire Council and becoming mayor in 2007.

The married father-of-three won the seat of Bathurst off Labor in the 2011 landslide that brought the Coalition to power.

Three years later, he became the minister for local government.

He moved to the race and lands and forestry portfolios in 2017.

After the 2019 election, with the Coalition winning a third term, he became the Minister for Regional Transport and Roads in 2019.

Announcing his run for the top job on Tuesday, Mr Toole said: ‘This is a time where we need a strong and stable leadership (as) we are coming out of a pandemic.’

He talked up his credentials as deputy party leader, and pointed to his track record of working with the incoming premier in crisis cabinet and other committees. 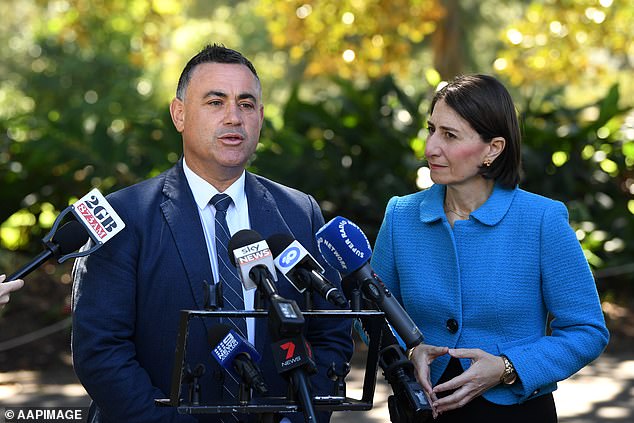 When announcing his surprise decision to step down, Mr Barilaro said NSW would be best served by someone who had the passion and fight to forge on.

The Nationals leader said he had been ‘thinking about this for a while’, and ruled out running for federal parliament.