John Bercow was last night at the centre of a fresh row over his ‘anti-Brexit bias’ after Government sources revealed that the former Tory MP had been in talks about becoming a Labour Minister.

The disclosure comes amid growing concern in Downing Street that the Commons Speaker will cause a constitutional crisis – potentially dragging in the Queen – by attempting, with pro-Remain MPs, to block Brexit.

But friends of Mr Bercow hit back last night by describing the talks with Gordon Brown’s aides as ‘ancient history’ and insisting that, while his wife Sally was ‘keen’ for Mr Bercow to defect, the Speaker himself was ‘never that close to doing it’.

The friend revealed that Labour’s talks with Mr Bercow had been led by Ed Balls in June 2007, when Mr Balls was Schools Secretary.

At the time, Mr Brown was about to succeed Tony Blair as Prime Minister and wanted to claim a ‘scalp’ from the Conservative benches.

Two years later, the then Tory MP for Buckingham became Speaker, at which point he became non-party-political.

The Government source said: ‘Bercow is basically a Labour-sympathising Remainer.

‘Bercow was on the brink of defecting from the Tories and only pulled out when they wouldn’t promise him a ministerial job.’

The overwhelming majority of Labour MPs backed Remain in the 2016 referendum.

The friend of Mr Bercow confirmed that he had discussed taking up a job as a Schools Minister under Mr Balls – and being handed a safe Labour seat in the North – as a prize for his defection. 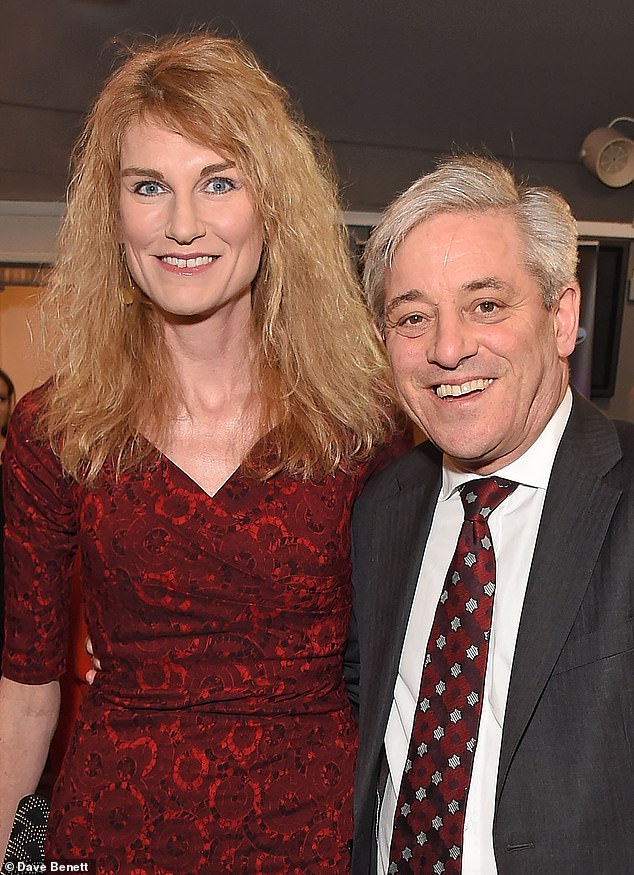 Friends of Mr Bercow have since hit back by describing the talks with Gordon Brown’s aides as ‘ancient history’ and insisting that, while his wife Sally (pictured) was ‘keen’ for Mr Bercow to defect, the Speaker himself was ‘never that close to doing it’

But they insisted that Labour had ‘done all the running’ in the negotiations, with Mr Balls joined by Ed Miliband in mounting the charm offensive. A group of female Labour MPs also held separate discussions with Mrs Bercow about the potential move.

The friend said: ‘It is ridiculous to suggest that talking to Labour 12 years ago makes John some sort of Left Brexit saboteur. At the time he was a mainstream Tory Eurosceptic.

Also, he had promised his local party association that he would not jump ship and by then he was set on being Speaker, which was much more likely to happen from the Tory benches.’

When Mr Bercow decided against defecting, he was instead put in charge of a review of speaking and language issues for Mr Balls.

Later that month, Mr Brown claimed his ‘scalp’ when Quentin Davies, the Tory MP for Grantham, defected to Labour.

The revelation comes as MPs prepare to return to the Commons next month for a series of bruising legislative battles over Boris Johnson’s plan to take the UK out of the European Union without a deal if Brussels refuses to remove the controversial backstop.

Mr Bercow has insisted he will fight with ‘every breath’ to halt any attempts to suspend Parliament in the run-up to Brexit as part of a ploy by Mr Johnson to override Remainer resistance.

Downing Street fears that if Mr Bercow facilitates a ‘coup’ by Remainers to try to make Mr Johnson extend Britain’s membership of the EU beyond October 31 – or force a second referendum – it could cause a titanic constitutional struggle which would end up politicising the Queen to what one adviser calls an ‘intolerable degree’.

Earlier this month, Mr Bercow, who voted Remain in 2016, told an audience in Scotland that he would fight any attempt by Mr Johnson to suspend Parliament if MPs try to block Brexit ‘with every bone in my body’.

He added: ‘We cannot have a situation in which Parliament is shut down – we are a democratic society.

‘Parliament will be heard and nobody is going to get away, as far as I am concerned, with stopping that happening.’

The Mail on Sunday revealed earlier this year that Mr Bercow had secretly met Tory rebel Dominic Grieve just hours before throwing out centuries of tradition to allow the MP to scupper Theresa May’s Brexit plans.

The pair spoke in Mr Bercow’s grace-and-favour Commons apartment the day before the Speaker tore up the rule book to allow the former Attorney General to table an amendment to wrest control of Brexit from the Prime Minister.

He also met with a ‘cross-party’ group of MPs who are determined not to let the UK crash out of the EU without a deal in place, although he strongly denied ‘plotting’ with them to foil Brexit.

A spokesman for the Speaker declined to comment on his defection discussions.