John Bolton behind closed doors: Trump’s efforts with Iran and North Korea are ‘doomed to failure’

John Bolton bashed any future talks between Donald Trump and North Korea and Iran, claiming they are ‘doomed to failure.’

Two attendees at a private lunch on Wednesday with Bolton, who was fired last week as Trump’s third national security adviser, told Politico of Bolton’s harsh words against the president.

They relayed that the ex-national security adviser also said the president’s decision to invite leaders of the Taliban to Camp David the weekend before the anniversary of 9/11 sent a ‘terrible signal’ and was ‘disrespectful’ to the victims of the terrorist attack because the jihadist group harbored al-Qaeda.

‘He ripped Trump, without using his name, several times,’ one attendee said. 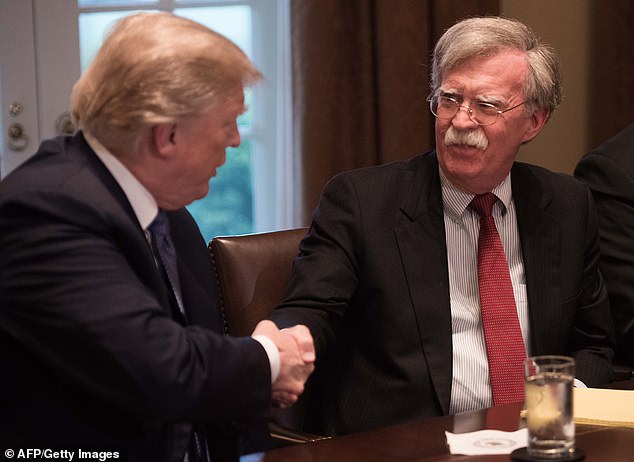 Not even a week after his Trump announced his departure, Bolton is speaking out against his former boss. One attendee said, ‘He ripped Trump, without using his name, several times’

The slights at the president come just over a week after Trump announced on Twitter he was parting with Bolton over several disagreements over how to handle national security and foreign policy issues.

‘I informed John Bolton last night that his services are no longer needed at the White House,’ Trump tweeted last Tuesday. ‘I disagreed strongly with many of his suggestions, as did others in the Administration, and therefore I asked John for his resignation, which was given to me this morning. I thank John very much for his service. I will be naming a new National Security Advisor next week.’

Not even 15 minutes later, Bolton pushed back that it was Trump’s decision to part ways.

‘I offered to resign last night and President Trump said, ‘Let’s talk about it tomorrow,’ Bolton tweeted last week – and has left his Twitter page titled @AmbJohnBolton blank ever since.

Bolton, who was speaking to guests invited to lunch by the think tank Gatestone, said the president’s failure to respond to an Iranian attack on an American drone earlier this summer helped set the stage for more aggression from the Middle Eastern nation in recent months.

He also said the U.S. should have retaliated, and claimed if we had, Iran may not have targeted Saudi Arabian oil fields over the weekend.

The ex-Trump official, who was previously a chairman of Gatestone, said the Iranian attacks that wiped out half of Saudi Arabia’s oil supply – making up 5 per cent of the world supply – was ‘an act of war.’

The president tweeted Sunday that the U.S. is ‘locked and loaded,’ and prepared to respond to the attack on the world’s largest oil refinery.

The policy differences between Trump and Bolton were no secret, and Trump said the final straw happened when Bolton wanted to apply to ‘Libya model’ to the U.S. handling of North Korea. 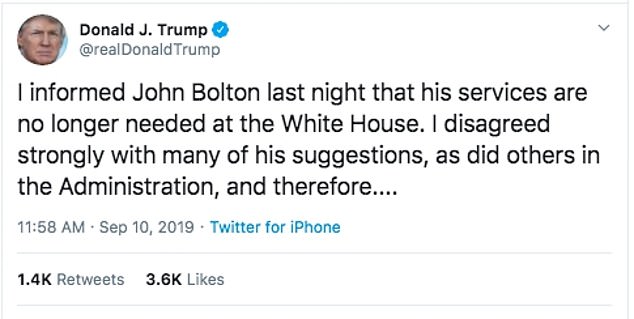 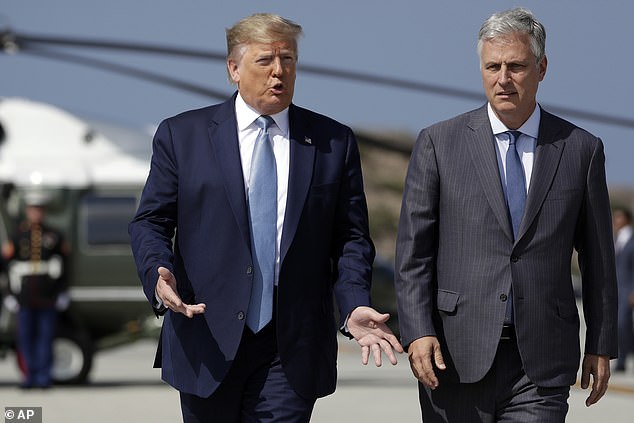 On Wednesday, hours before Bolton’s chides toward Trump, the president announced and introduced his new national security aide Robert O’Brien (right), who he suggested would be more compatible with him than his former hawkish adviser

Trump promised to name Bolton’s successor this week, and on the same day Bolton made the comments chiding the president, he announced that hostage negotiator Robert O’Brien would become the fourth national security adviser of his presidency.

While speaking to reporters on Wednesday in Los Angeles, California, Trump said he has ‘good chemistry,’ – indicating that he feels their working relationship may be more compatible than with Bolton.

After 17 contentious months as Trump’s aide, Bolton said he would ‘have my say in due course,’ but said his main concern remained U.S. national security, which suggested he would not yet speak out against the administration.

Since Bolton’s ouster, however, he has already been in talks with literary agents to write and publish a memoir of his time working under Trump. If the book were to come to fruition and adopt a ‘tell-all’ perspective, it could earn him millions.