John Brennan is farewelled by host of Australian celebrities

The cream of Australia’s broadcasting industry has gathered for the funeral of radio legend John Brennan.

Channel 9 newsreader Peter Overton was accompanied by his wife Jessica Rowe, and followed into the church by 2GB’s Ben Fordham.

Denis Handlin, CEO Sony Music Australia: ‘He was just a true legend and pioneer. He paved the way for so many people.’ 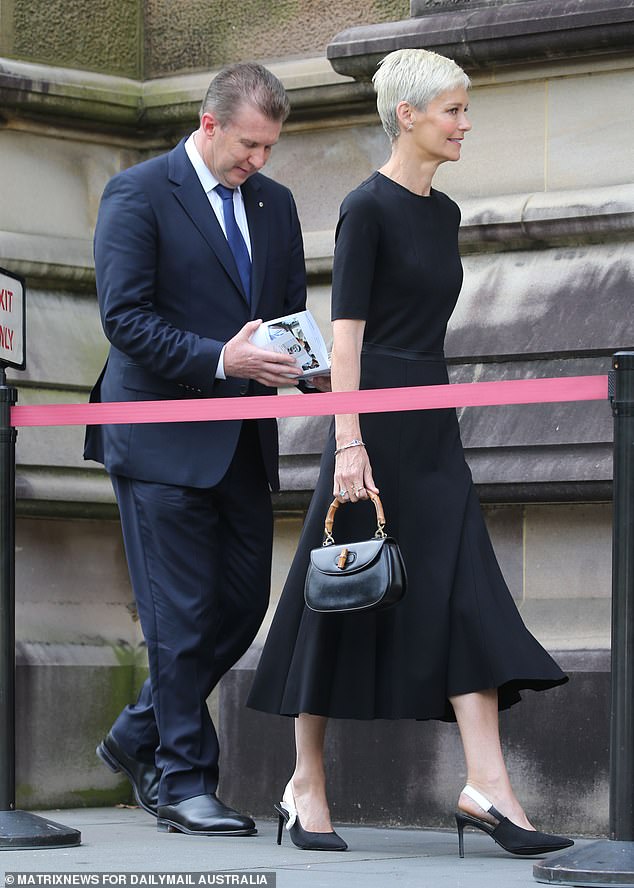 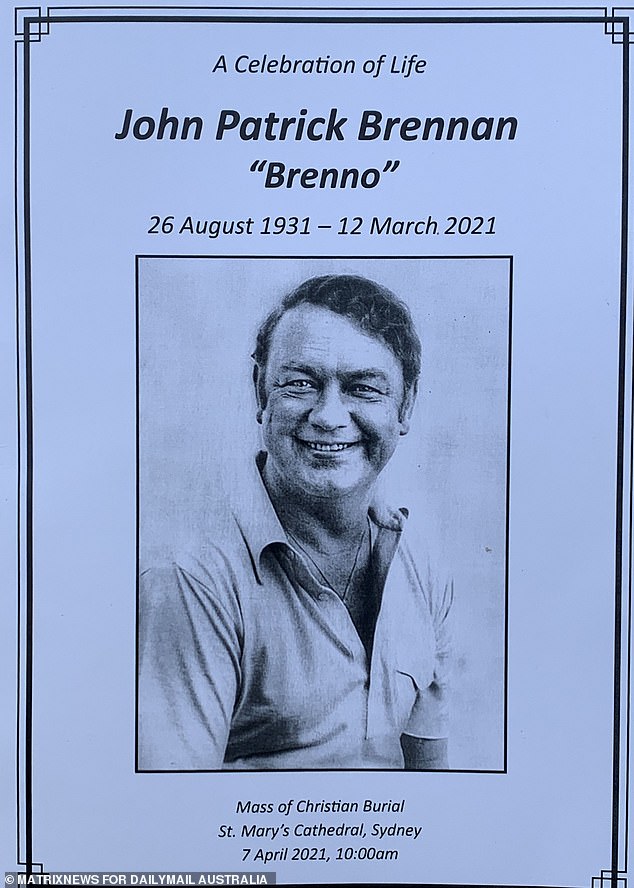 Brennan has been remembered as a larger than life character – an unparalleled spotter of talent, ‘media godfather’, and master at keeping massive egos in check.

Broadcaster John Stanley said: ‘An amazing guy. He pretty much gave me everything I’ve got in life.’

Ray Hadley added: ‘Probably the greatest programmer radio’s had in both talkback and music.’

The Requiem Mass began with an audio failure – celebrant Father Brian Lucas explained he had started one minute early and his microphone was not turned on.

Brennan, a devout Catholic, had chosen the readings and hymns himself but had expected his funeral to be held in his parish church rather than the mighty cathedral.

Jones delivered the opening reading from the first letter of St Paul to the Corinthians.

‘If I have all the eloquence of men or of angels, but speak without love, I am simply a gong booming or a cymbal crashing,’ he said. 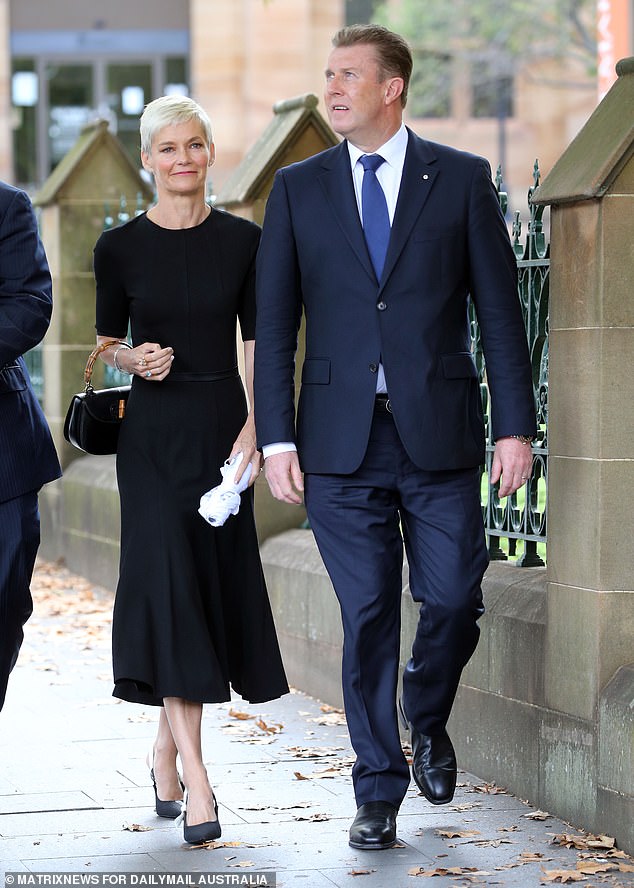 Channel 9 newsreader Peter Overton was accompanied by his wife Jessica Rowe, and followed into the church by 2GB’s Ben Fordham

Fr Lucas used his homily to call on the heavy-hitters of the broadcast media to show kindness and understanding in their work.

‘Perhaps the world of broadcasting might be better off if we take less pleasure in other people’s sins and more delight in truth,’ he said.

In the 1960s he took a struggling 2SM to the top of the ratings, then in the 1980s assembled Sydney’s talkback kings at 2UE before a final triumphant stint at 2GB.

Brennan mastered Top 40 music programming before moving to the fledgling talkback format which he developed into ‘dial-in democracy’.

He summed up talkback this way: ‘Two basics of talk – to inform and entertain. Entertain informingly, inform entertainingly.’

Brennan famously convinced Wallabies coach Jones to get behind the microphone and asked former taxi driver Hadley to fill-in for Laws in his morning position.

Ben Fordham, who replaced Jones in his breakfast slot at 2GB last year, is another to have benefited from Brennan’s support and guidance.

‘A force of nature, a lion tamer, a pioneer of people power – he harnessed the idea of dial-in democracy,’ Fordham said.

John Patrick Brennan died at a retirement home on March 12 aged 89 after a long battle with vascular dementia. His funeral was delayed so family members could return from overseas.

Brennan began his radio career at 2WG in Wagga Wagga in 1949 at age 17 and later worked at 2GZ in Orange where John Laws took his slot when 2SM coaxed him to Sydney in 1956.

He introduced the Good Guys format, a US-style team of disc jockeys who played Top 40 music, at 2SM and stayed at the station for 26 years.

[2SM took its callsign from St Mark’s Church at Drummoyne – where parish priest James Meany raised the finances to form Catholic Broadcasting Co Ltd and obtain a radio licence in 1931 – and not St Mary’s, as many believe].

Brennan spent 20 years at 2UE where Laws, Jones and later Hadley dominated the airways, then did eight years at 2GB after Jones and Hadley jumped ship.

A challenging part of Brennan’s job was managing the huge egos of stars who could squabble over their prominence in station promotions, relative office sizes and pay packets.

Brennan, whose love of radio began in childhood, once described his recipe for harnessing talkback listeners.

‘You’ve got to be able to greet them, meet them, and then that conversation can go in any direction,’ he said.

‘Everyone wants to be a talk host, or anyone that wants to be one has to have an ego, if they don’t, I don’t think they’ll be highly successful.’

The biggest names in AM radio paid tribute to Brennan as they mourned his death.

‘I’d never been in a radio station so anything I might have or might be I owe to him,’ Jones said.

Fellow 2GB announcer Chris Smith said: ‘Others might claim they invented talkback radio, but Brennan did.’

‘John gave me my first opportunity in radio many years ago. Always had words of encouragement,’ Gould tweeted. ‘Radio in heaven just got better.’

Nine Radio managing director Tom Malone told staff in an email that Brennan was ‘a legend’ who transformed radio wherever he worked.

‘He understood the power of talk radio and its ability to give ordinary Australians their say, and holding law makers and institutions to account,’ he said.

‘He loved the interaction with callers, and was passionate about news and current affairs keeping copious notes on issues important to everyday Australians.

‘Better than anyone he understood the companionship talk radio provided – on weekends, overnights, during holiday periods, and big news stories.’

Brennan received an Order of Australia Medal in 1991 in recognition of his services to broadcasting and was inducted into the Commercial Radio Hall of Fame in 2002.

His 2014 autobiography Brenno was subtitled: The Life and Times of a Media Godfather.

Brennan retired in 2007 but remained involved in radio as a consultant. Malone said he was known to call hosts to give them feedback or just to let them know he was listening.

Others who worked with Brennan recalled he would regularly ask about the welfare of their wives and husbands – and always remembered the names of their children.

They recalled an irreplaceable mentor, mate and gentleman.

Brennan is survived by Jenny, his wife of 66 years, sons Peter and Richard, their respective wives Dearne and Kim, and grandchildren Jennifer, Joshua and Olivia. Daughter Jan-Mary predeceased him.