He overhauled his health in 2015 after becoming bored with ‘wasting’ his life.

And John Goodman has certainly stuck to his lifestyle almost three years after shedding 100lbs as he appeared in the Big Apple while promoting the rebooted series of Roseanne Barr on Wendy Williams alongside his co-star.

The 65-year-old actor – best known for his role as Roseanne Barr’s portly husband Dan on the hit sitcom – looked slimmer than ever as he headed out in a low-key ensemble comprising of a baggy T-shirt and a hoodie. 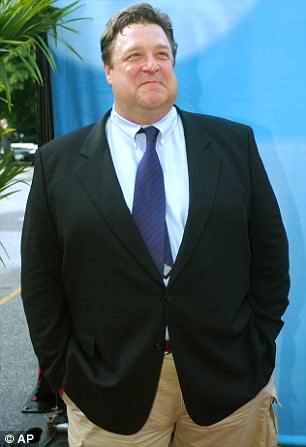 Now and then: John Goodman has certainly stuck to his new lifestyle almost three years down the road as he appeared in the Big Apple while promoting the rebooted series of Roseanne Barr on Wendy Williams alongside his co-star (pictured, right in 2004, left, on Wednesday)

Speaking to People at the time, he explained at the time that he was bored of sitting around and planning what he would eat next.

He said: ‘I know it sounds sappy, but it was a waste. It takes a lot of creative energy to sit on your ass and figure out what you’re going to eat next … I wanted to live life better.’

He hired in the help of Mackie Shilstone – a revered health coach to the likes of Serena Williams – and cut out booze and sugar. 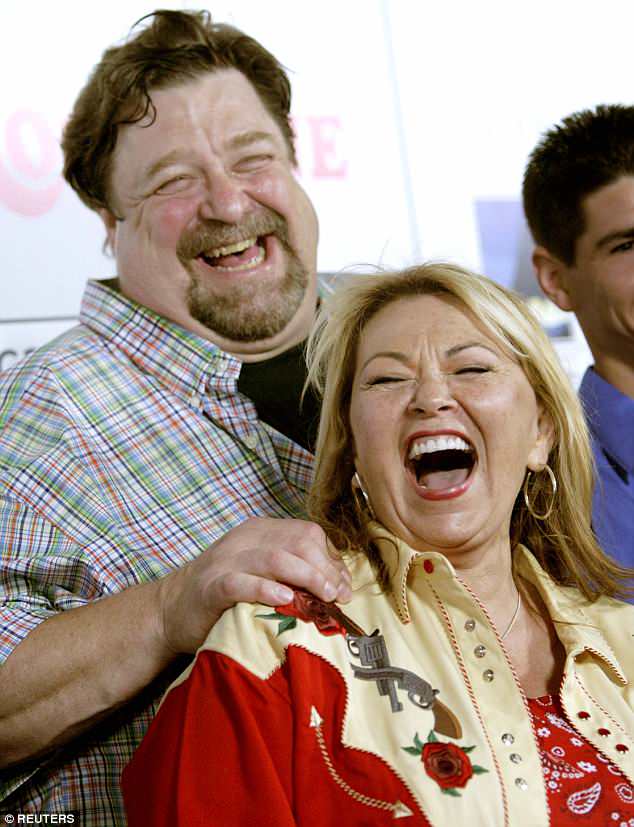 Way back when: John and Roseanne (pictured in 2005) have long been pals and co-stars

Out and about: Roseanne and John Goodman, both 65, were snapped in NYC and LA, respectively, on Wednesday following their show’s hugely-rated return to TV

He even began working out six days a week, but admits he isn’t giving Hollywood action stars a run for their money. The funnyman quipped in the interview: ‘I’m breaking a sweat but I’m not going nuts.

On Wednesday, Roseanne was beaming on the heels of her comeback, as their rebooted show garnered massive ratings in its return to ABC after over 20 years.

The veteran star was in the Big Apple as she continued promoting the show clad in a black trench coat over a velvety golden top with a black top underneath.

John , who was lauded for his performance as Dan Conner in the episodes, was spotted at LAX returning from New York, clad in a comfortable ensemble of an ash grey zip-up hooded sweatshirt with light ash grey sweatpants, a navy blue shirt (with a pair of black sunglasses dangling from the collar), and black sneakers. 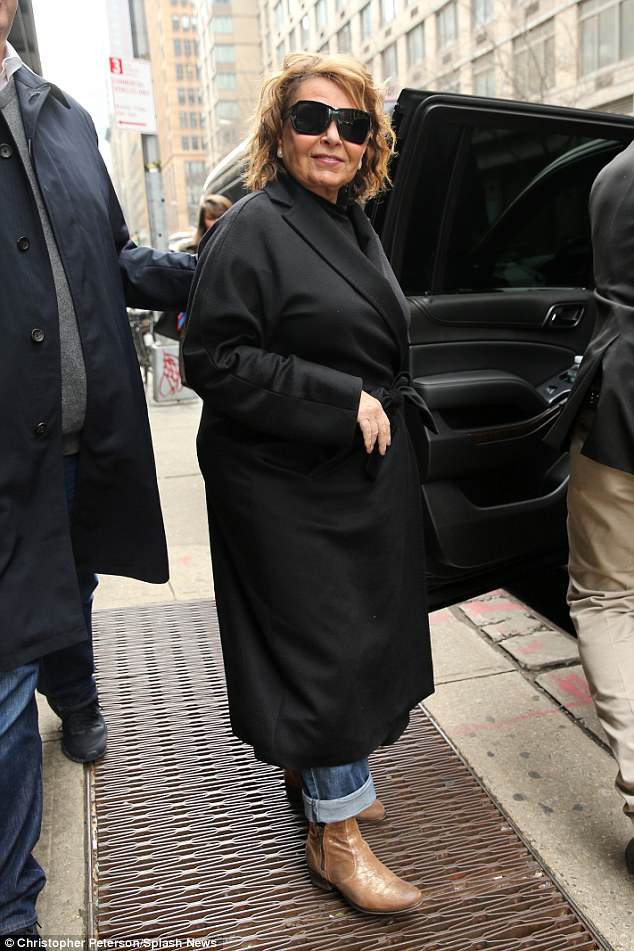 Zeitgeist: Many lauded Roseanne for her topical presentation of American familial dynamics under President Donald Trump 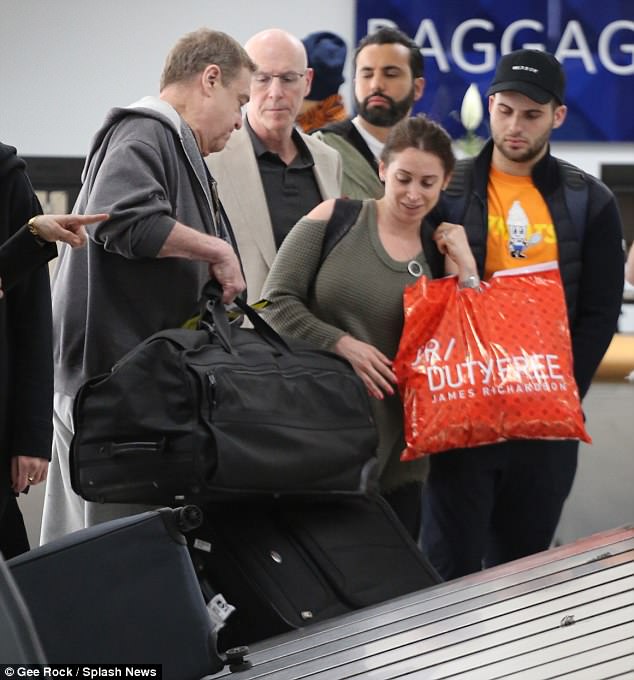 Arrival: Goodman was seen retrieving his belongings off of the baggage carousel

He had a big smile on his face amid the huge splash the show made in its return, as Roseanne tweeted Wednesday that she received a text message from Goodman that read, ‘HURRAY FOR THE CONNORS!’

Roseanne, who now resides in Hawaii, rounded out her ensemble with torn blue jeans and light brown boots, accessorizing with black sunglasses and earrings.

She had her wavy brown locks parted as she trudged on in her media tour pushing the show, which drew a total of 18.2 million viewers with back-to-back episodes on Tuesday.

Roseanne’s appearance on Wendy Williams Wednesday was marked by an awkward moment as Wendy asked her if she was ‘in a good place’ with ex-husband Tom Arnold, who recently penned a review of the reboot for The Hollywood Reporter.

Roseanne responded, ‘I was like, “Oh my God” – after a while, I’m not supposed to talk about it. But, yeah, they’re going to get Harvey Weinstein to review Rose McGowan’s next show.’ 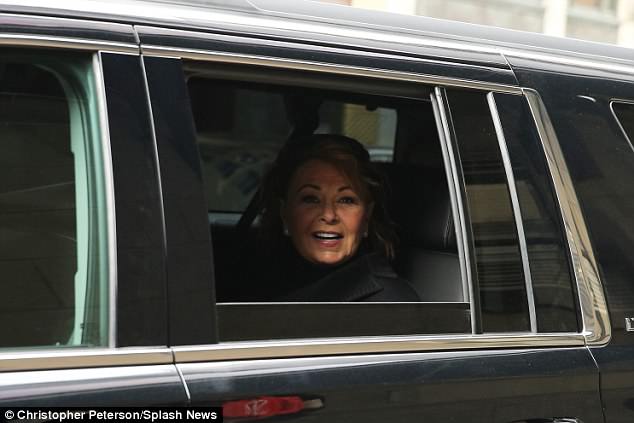 The good life: Roseanne’s elation was palpable as she smiled from the inside of her limo 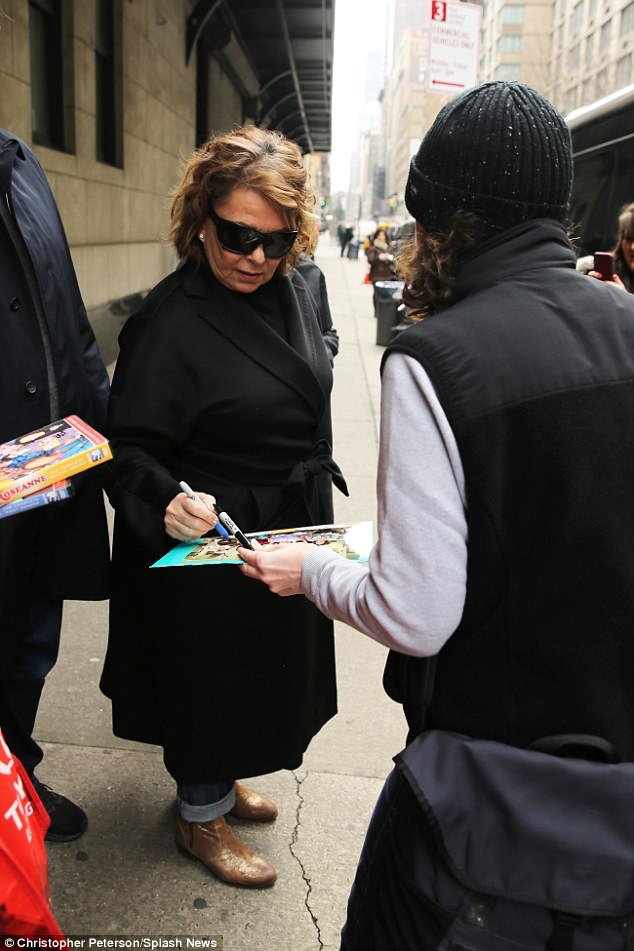 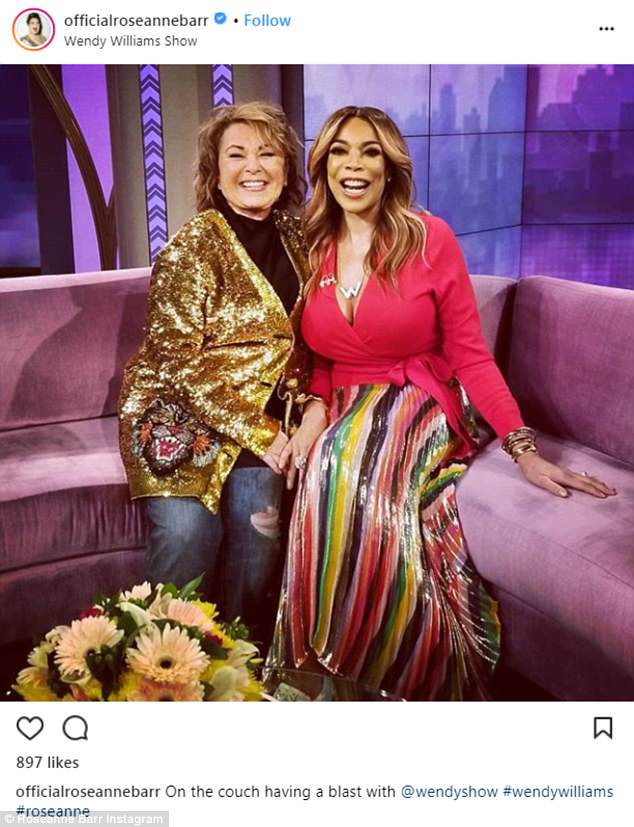 Lots of laughs: Roseanne posed for a shot alongside Wendy Williams, as the pair had an awkward exchange in their conversation regarding husbands

Wendy told Roseanne that Arnold didn’t ‘give it to [her] too bad’ in his review, to which she responded, ‘I didn’t read it; I don’t like talking about husbands, right, Wendy,’ in reference to rumors of infidelity that have dogged Wendy’s husband Kevin Hunter in their marriage.

The show biz veteran took to Twitter on Wednesday to thank her fans for the enormous show of support as she got back in the game with her most high-profile project in years.

She wrote: ‘i am so happy-I left Hawaii last June to go to work to write the Roseanne shows-I worked hard thru bronchitis, missing my grandkids & a bum knee & U guys made it all worth it! thanks so very much!’ 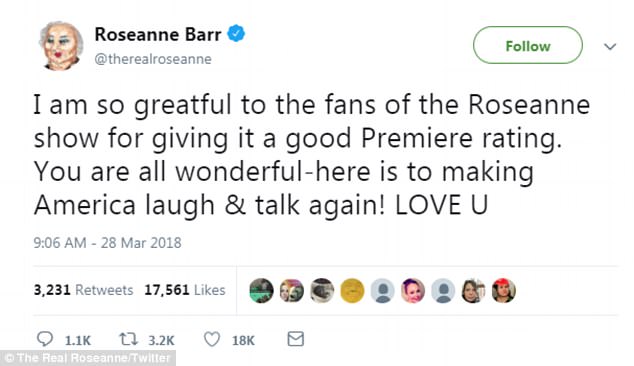 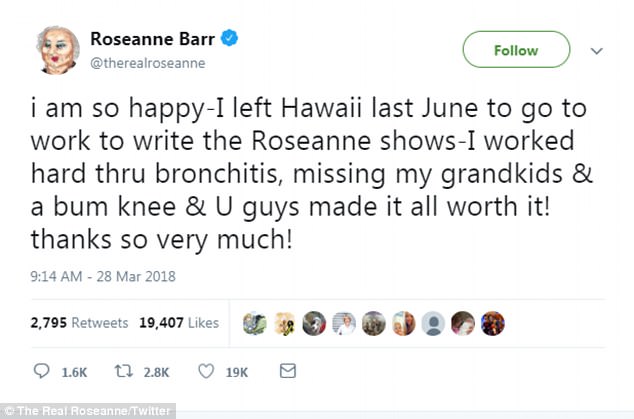 Good vibes: Roseanne couldn’t contain her excitement as she took to Twitter on Wednesday