JOHN HUMPHRYS: Yes, Boris can bang on, but I’d never have dared speak to him like that

JOHN HUMPHRYS: Yes, Boris can bang on, but I’d never have dared speak to Boris Johnson like the BBC’s Nick Robinson did

By John Humphrys For The Daily Mail

There’s no such creature as a political interviewer who does not want his interviews talked about. Never has been, never will be.

So my old colleague Nick Robinson must have been hugging himself when he came off the air yesterday morning.

His interview with Boris Johnson on BBC’s Today programme was the talk of the town. Understandably so. It had been quite extraordinary. Nick did something I never had the nerve or the audacity to do in 33 years of political interviewing. He told Mr Johnson to shut up.

To be precise he told him to ‘stop talking… we’re going to have questions and answers, not where you merely talk if you wouldn’t mind’.

It was all the more extraordinary as he began the interview by reminding Johnson that this was his first Today interview since he’d become prime minister more than two years ago. There had been many requests. All turned down. Now he finally had the PM opposite him and here he was telling him to stop talking. Why interview someone if you don’t want them to answer?

I had more than my share of lively political interviews during my 33 years on Today. One Tory Cabinet minister demanded I be sacked for ‘poisoning the well of democratic debate’

For a moment Johnson seemed genuinely bemused. He muttered something under his breath about ‘being very happy to stop talking’ but when the next question came he spluttered: ‘You seem to have abandoned the injunction you’ve just given me.’

The reaction was predictable. Angry Tory MPs demanded the BBC apologise. So did legions of listeners. The BBC kept shtum. Probably because senior managers couldn’t agree on what to say. Some thought it was disgraceful, calling it a planned ambush. But I understand it was quite the opposite. Some of Johnson’s own ministers have described how he often ducks difficult questions in meetings by avoiding eye contact and deliberately straying from the subject, which is exactly what he did yesterday morning in the Today studio. Some of his team were in the gallery and found it all rather amusing. Their reaction: ‘Typical Boris’. I suspect he saw the whole thing as a tactical triumph.

I also suspect Nick wishes he hadn’t risen to the bait.

When I joined the BBC the aggressive political interview was in its infancy. Obsequious interviewers tended to consult with politicians as to what questions they’d like to be asked. The great Robin Day and Alastair Burnett changed all that. Day famously aroused the wrath of the defence secretary Sir John Nott in one interview by calling him a ‘here today… gone tomorrow’ politician. Sir John ripped off his microphone and stormed out of the studio.

I had more than my share of lively political interviews during my 33 years on Today. One Tory Cabinet minister demanded I be sacked for ‘poisoning the well of democratic debate’. And when Labour came to power I became ‘the John Humphrys Problem’.

I had conducted a pretty rigorous interview with the Cabinet minister Harriet Harman. She complained to No 10 . Labour wrote to my editor claiming that the Humphrys Problem ‘has assumed new proportions’. The letter concluded: ‘We have had a council of war and are seriously considering whether we will suspend co-operation when you make bids for Cabinet ministers’. But my bosses kept their nerve. Or at least they ducked their heads under the blanket – and I suspect they’ll do the same this time too. 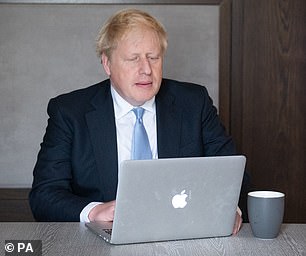 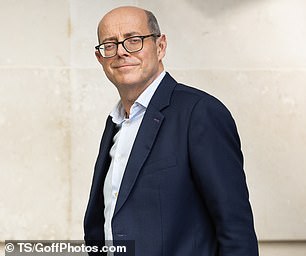 Nick (right) did something I never had the nerve or the audacity to do in 33 years of political interviewing. He told Mr Johnson (left) to shut up

One of my former editors told me years ago that I could be as tough and even aggressive as I liked in an interview, but I should always remember that I was attacking the politician’s argument and not the politician himself, whatever I may have thought about him as an individual.

My editor was a wise man and I found it hard to argue with that. But it doesn’t matter what we think. The only people who really matter are the listeners and viewers, and surely what they want is to hear the policies challenged so that they can reach their own conclusions.

But what if the politician effectively refuses to debate? What if they insist they have already answered a question even when they have barely even acknowledged it? You’ve heard those interviews a thousand times. For the interviewer it’s like trying to nail custard to the wall.

More important, they damage democracy rather than enrich it.

What Nick Robinson wanted Boris Johnson to do was answer the concerns expressed by people like Next’s chief executive Lord Wolfson that the country is facing a crisis because of a shortage of goods, a lack of carers and the threat of a 70’s style inflation spiral.

Does the PM have a plan? If he does, he wasn’t telling the listener what it was, simply repeating what he’d already said in speeches and interviews.

We should all hope that interviewers aren’t scared off by the reaction to yesterday’s interview. We need tough interviewers asking politicians tough questions. But maybe not telling them to shut up.