They are known for their close relationship, which has lasted for over a decade.

And on Friday evening, John Legend proved that love was still in the air between him and his wife Chrissy Teigen as they were spotted on a date night at Giorgio Baldi in Santa Monica.

The 42-year-old songwriter was seen holding a car door open for his wife before he entered the vehicle himself and speeding off into the night.

Chivalry is not dead: John Legend held a car door open for his wife, Chrissy Teigen, as they finished up a dinner date at Giorgio Baldi in Santa Monica on Friday evening

Legend was dressed in a stylish baby blue bomber jacket during his date night.

The All Of Me singer contrasted his outer layer with a black t-shirt, a matching pair of pants and leather boots, as well as a gold watch.

Teigen kept it casual in a white t-shirt and a loose-fitting pair of distressed and cuffed blue jeans. 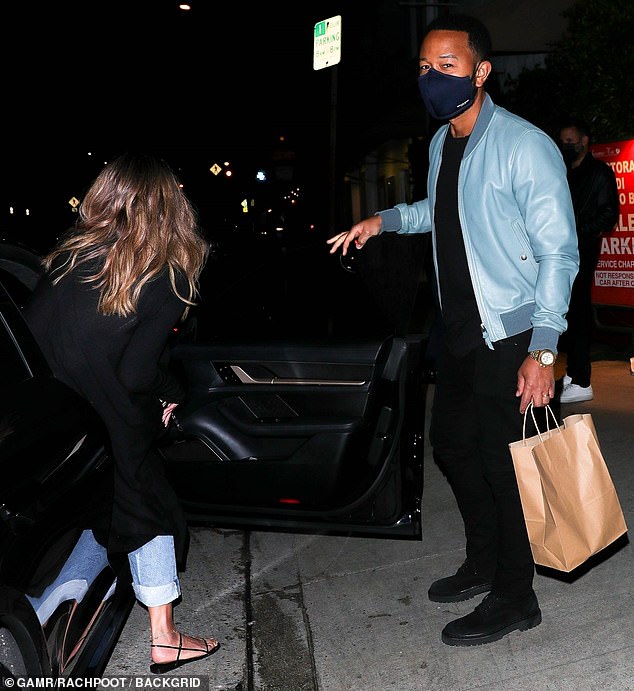 Fresh dressed: The All Of Me singer wore a baby blue bomber jacket and black pants during his shared night on the town 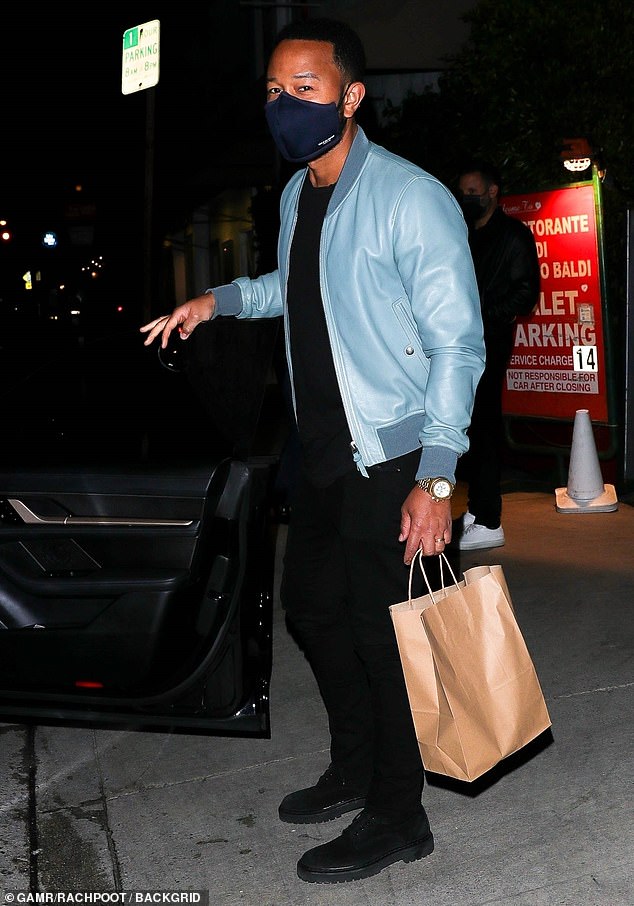 Not taking chances: The couple was seen wearing facial coverings to keep themselves safe while interacting with other people

The model’s luscious blonde hair fell onto her shoulders and backside and contrasted with the dark color of her outer covering.

Legend and Teigen both wore face masks to keep themselves safe amid the ongoing state of the global pandemic.

The couple first met in 2006 when they were introduced to each other by director Nabil Elderkin on the set of a music video.

After a few years of dating, the pair became engaged in 2011 and tied the knot two years later during a ceremony in the getaway destination of Como, Italy.

The two went on to start a family with the arrival of their daughter Luna, aged five, and later added a son named Miles, aged two, to the mix. 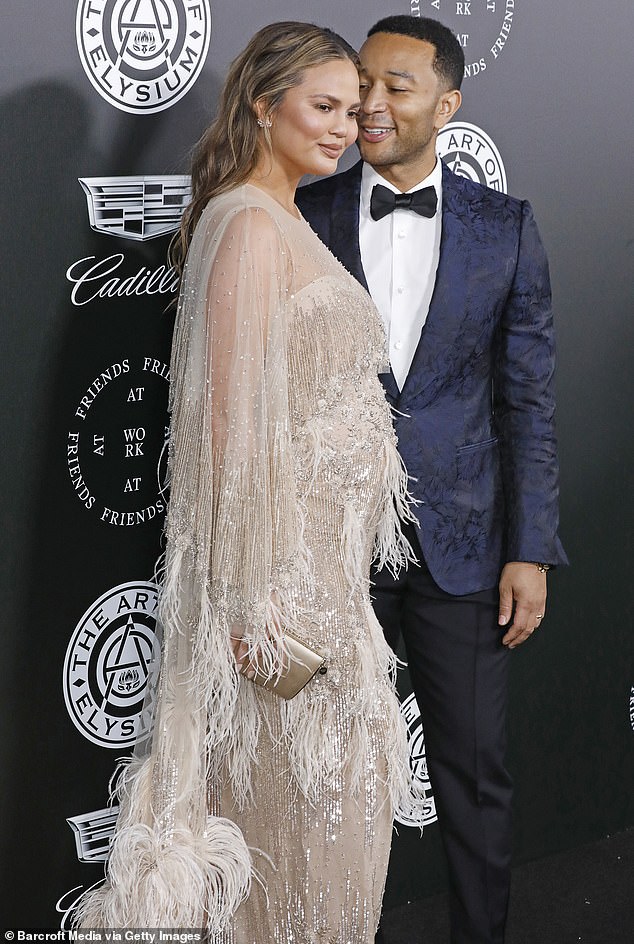 Working together: Legend and Teigen were first introduced on the set of a music video; they are pictured together in 2018 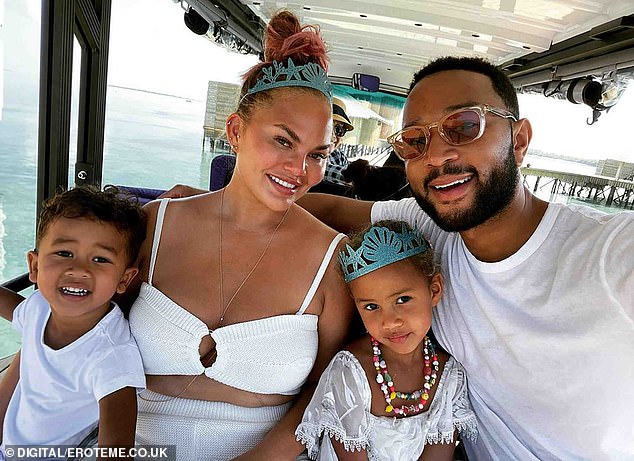 Happy parents: After tting the knot in 2013, the couple added a daughter named Luna and a son named Miles to their family

During an interview for the podcast Armchair Expert, Legend spoke about how his perspective on maintaining a relationship changed as he grew older.

‘At a certain point, I just decided that person was Chrissy. I decided I wasn’t going to mess with somebody else anymore,’ he added.

The La La Land actor went on to note that, although he and his now-wife did not take their relationship very seriously at its inception, they eventually grew closer.

‘We were both seeing other people at the time. There was kind of a looseness at the very beginning, but we fell in love not long after that,’ he recalled. 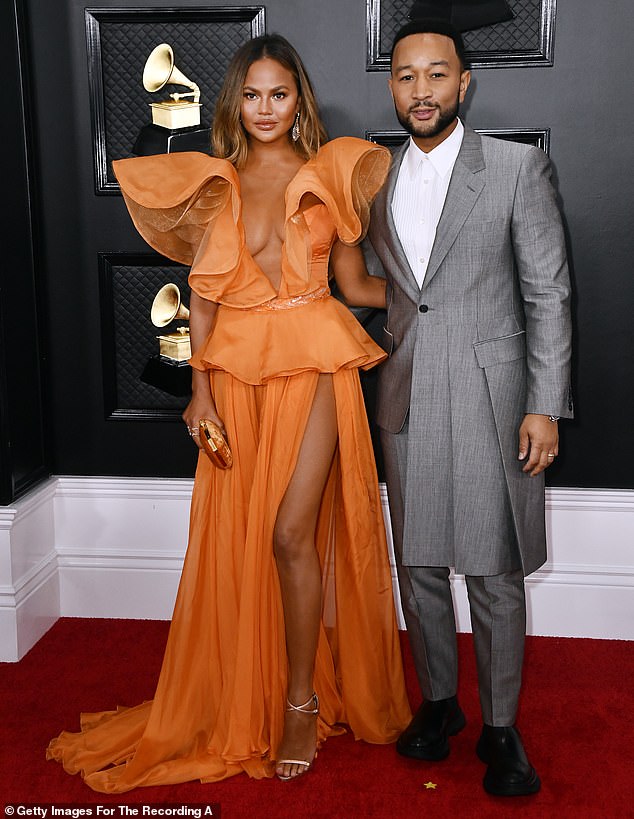 One and done: During an interview, Legend expressed that, once he met his wife, he decided that he ‘wasn’t going to mess with somebody else anymore’; they are seen at the 62nd Annual Grammy Awards in 2020