Will ailing John Lewis axe its price pledge? Store could be forced to ditch its famous ‘Never Knowingly Undersold’ slogan after plunging to the first half-year loss 155 years

By Hannah Uttley City Correspondent For The Daily Mail

John Lewis could be forced to ditch its Never Knowingly Undersold pledge after plunging to the first half-year loss in its 155-year history.

The John Lewis Partnership, which also owns Waitrose, slid £25.9million into the red in the year to July 17, down from a profit of £1million in the same period last year.

The group blamed wider troubles on the high street for a 1.2 per cent fall in sales to £5.4billion. Its Never Knowingly Undersold pledge forces it to match prices offered by competitors such as House of Fraser and Debenhams.

The policy has driven down profits by forcing John Lewis to cut costs when other firms have sales – and analysts now fear the policy is driving the company to the brink.

Paula Nickolds, managing director of the store chain, said the number of times it was forced to change prices during the six months was up by almost three-quarters on 2018.

She added: ‘This dropped straight to the bottom line. It’s a direct consequence of lower consumer confidence which I sadly expect to continue.’

Experts warned the retailer should consider axing the price promise if it wants to get the business back on track.

Chris Daly, of the Chartered Institute of Marketing, said: ‘Despite its relative strength, John Lewis is not immune to tough retail conditions.

‘It risks heading towards a price cut trap, partly because its ‘Never Knowingly Undersold’ brand positioning forces it to pursue rivals’ discounts.

‘Add to this customers who are tougher than ever to lure into stores, and today’s results present a stark warning.’

Russ Mould, of trading firm AJ Bell, added: ‘It’s making life very hard for them. They clearly see it as a key differentiator but John Lewis doesn’t just sell on price, it sells on its service.’ 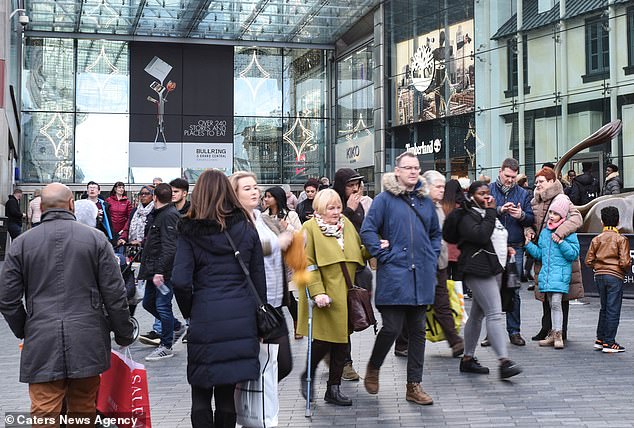 The group blamed wider troubles on the high street for a 1.2 per cent fall in sales as experts warned the retailer should consider axing the price promise if it wants to get the business back on track (file image)

Miss Nickolds said the company had no plans to scrap the policy despite mounting pressure.

She said: ‘We remain committed to our principles and the long-term commitment we’ve made to Never Knowingly Undersold.

‘We’ve outperformed the market and that’s about the continued investment in doing things differently and we continue to press forward. That will stand us in good stead against the distress.’

The head of media watchdog Ofcom will take over from current chairman Sir Charlie Mayfield early next year.

Waitrose fared better in the period, but sales still fell by 0.4 per cent.

The supermarket is losing a delivery contract with Ocado, which has struck a deal with rival Marks & Spencer.

Only in Waitrose: Wine and olive oil stockpiled for Brexit

Waitrose is stockpiling olive oil and wine in preparation for Brexit

The supermarket, which is owned by the John Lewis Partnership, is building stock of non-perishable items where possible – including oil, wine, canned goods and some frozen food – to guard against shortages in the event of a No Deal Brexit.

Sir Charlie Mayfield, chairman of John Lewis, said: ‘Should the UK leave the EU without a deal, we expect the effect to be significant and it will not be possible to mitigate that impact.

‘In readiness, we have ensured our financial resilience and taken steps to build stock where that is sensible, and to improve customs readiness.’

Sir Charlie’s comments came as Co-op chief executive Steve Murrells warned there are likely to be shortages of fresh food if the UK leaves the EU without a deal.

He said this is likely to lead to price rises on some items, particularly fresh fruit, which may have to be transported more expensively via air freight to avoid congested ports.

Mr Murrells said: ‘We think there will be shortages in some fresh food areas.

‘Where that is the case, we would endeavour to bring it in to give our customers a choice.’