The John Lewis Partnership slumped to a £517million loss last year and has confirmed that more store closures are on the way.

The group, which includes John Lewis and Waitrose, said it was ‘in discussions with landlords and final decisions are expected by the end of March.’

No details concerning the number of stores to permanently close, their locations or job losses were provided.

The group said: ‘Hard as it is, there is no getting away from the fact that some areas can no longer profitably sustain a John Lewis store.

‘Regrettably, we do not expect to reopen all our John Lewis shops at the end of lockdown, which will also have implications for our supply chain.’

Chairman Sharon White said: ‘Closing a store is one of the hardest decisions we can make as a Partnership.

‘We are acutely sensitive to the impact on our Partners, customers, and communities, particularly at a time when retail and our high streets are undergoing major structural change.

‘We will do everything we can to lessen the impact and will continue to provide community funds to support local areas.’

JLP said it wants to save £300million a year by 2022/23, but it will also plough £800million into its ‘turnaround’ plans this year, which includes a restructuring.

The group said its annual loss emerged as a result of ‘substantial exceptional costs’, namely the write down in the value of John Lewis shops ‘owing to the pronounced shift to online’, as well as restructuring and redundancy costs from store closures and head office changes. 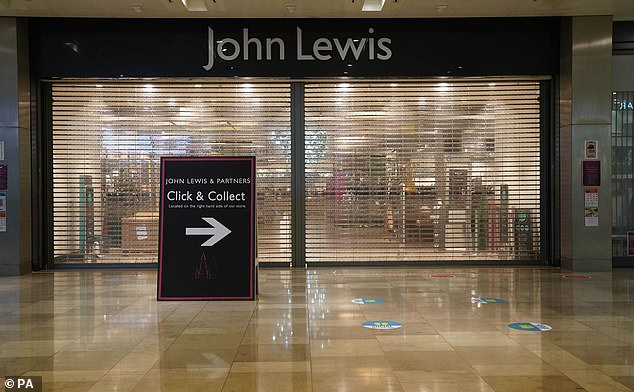 Closures: More closures are on the way for stores in the John Lewis Partnership

The group expects around 70 per cent of its purchases to be made online by 2025.

As part of a major five-year turnaround plan, JLP said that by 2030, 40 per cent of its profits will come from outside retail and instead be focused on areas like financial services, housing and ‘outdoor living.’

Last year eight ‘loss making’ John Lewis stores and seven Waitrose stores were permanently closed, and the group today confirmed that it is in the process of reducing the cost of its head office by 20 per cent.

In July, the group announced plans to permanently close John Lewis stores in Birmingham, Croydon, Newbury, Watford, Swindon and Tamworth, as well as hubs in Heathrow airport and St Pancras train station in London. The move triggered the loss of 1,300 jobs.