John Lloyd’s surgeon thought he was joking. ‘You will survive this, John,’ he reassured him. The main thing was that they had caught the prostate cancer in time. All they had to do now was go in and remove it.

Only Lloyd wasn’t joking. He wanted to survive, obviously. But something else was in the forefront of his mind. One of the risks of such invasive surgery is collateral damage to the surround nerve, the side-effect of which is the inability to maintain an erection.

Some people regain it, some don’t. Lloyd’s surgeon had performed the same surgery on actor Ben Stiller. He’d been OK.

‘I said, look, my life has been amazing, if the nerves are entangled and you can’t get to the tumour, just sew me up, let me have a good two or three years and I’ll ride off into the sunset a bloody happy man,’ Lloyd tells The Mail on Sunday. ‘He thought I was joking. I said, “I’m deadly serious”.’

Thankfully for the former British No 1 tennis player and Davis Cup captain, the operation was a success. No nerve damage. It was his first question after he came round.

Lloyd jokes about it now, as he talks from his home in Palm Beach, Florida. But he’s at pains not to make too light of his cancer story. He includes it in his new book Dear John but rewrote that chapter to make sure it did not appear too flippant.

Many others are not as fortunate. Lloyd, in his own words, is one of the lucky ones.

The first working title for his book was Lucky Lloyd. He’s always seen himself that way. Not just for surviving cancer (and retaining the use of his manhood) but lucky, too, that he only discovered the tumour because he’d recently got divorced, moved full-time to Florida and changed doctor. He’d had no other symptoms.

Lucky that the boy from Southend-on-Sea travelled the world as a professional tennis player, a handsome pin-up, enjoyed its luxuries and its attention, mixed with A-listers and presidents and married Chris Evert, one of the most successful and famous tennis superstars of the time.

Lucky, he says, to have worked in the game he’s loved all his life. He’s lucky to have a loving family and to have recently become a grandfather. Oh, and lucky to have been saved from drowning in the Wimbledon baths by a drunk friend who just happened to need the loo.

‘I’ve crammed things into my 67 years that I never dreamed of,’ says Lloyd. ‘If it stopped tomorrow, I would look back and say you’ve done all right, son, you’ve led an amazing life. The people I’ve met, the cultures, the friends from all over the world. I consider myself extremely lucky.’

For eight years, he was one half of tennis’s golden couple. He and Evert posed on the cover of People magazine. They started dating during Wimbledon in 1978 and married a year later. ‘I had a decent sort of fame or whatever you call it but getting married to Chris was like going to a different planet,’ says Lloyd. ‘You have to leave your ego at the door.’ 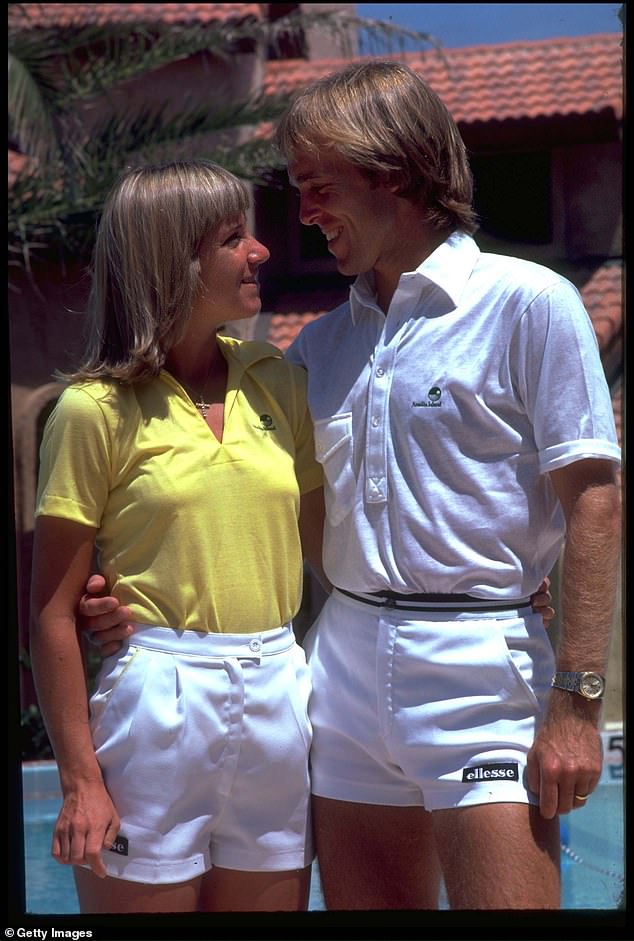 One half of the ‘golden couple’, he wed the World No. 1 female tennis player Chris Evert in 1979

They divorced in 1987. Lloyd talks in the book about Evert’s affair with Adam Faith, the former pop star, who died in 2003. Not to do so, says Lloyd, would have been ‘a cop-out’.

But he holds no grudges. Lloyd admits they had gone their separate ways before then. ‘We were both young,’ he says. ‘We both probably did things that we regret. Neither of us were angels.’

They remain friends. Lloyd messaged Evert recently after she was diagnosed with ovarian cancer. On May 10, Evert announced she had undergone her sixth and final round of chemotherapy. All, touch wood, is well.

‘She’s a champion, she’ll fight anything,’ says Lloyd. ‘Champions like her find a way, it’s in their DNA. Her mindset would have been, “I’m down a break in the third. I’ve won 1,000 matches from here before. I’ve just got to win another”. And that’s what she’s done.’

When Lloyd was diagnosed with cancer in 2016, he says he was not surprised — even though he’d been otherwise healthy with no symptoms.

‘I always felt sooner rather than later, something was going to happen to me,’ says Lloyd. ‘I’d been so damn lucky. So when I got the call to say I’d got prostate cancer, I wasn’t really surprised. I just figured, hey, you can’t keep winning on the roulette wheel forever.’

In a way, though, he had struck lucky. ‘If I’d waited another nine months, I would have probably been in a bad situation,’ he says.

During his life, Lloyd has met world leaders and Prime Ministers, the Queen and Princess Diana, celebrities and film stars. Perhaps the most interesting is a 40-year friendship with former US President Donald Trump.

They have played golf together at Trump’s club in Palm Beach. Trump offered Lloyd a discounted membership on the promise that he plays doubles with any of the high-profile visitors who want a knock. ‘He loves a bloody deal,’ says Lloyd.

‘One look at the bold businessman dealing in millions, one look at the force of nature that is the former leader of the free world, and you think of him as this super-confident guy who takes no prisoners,’ Lloyd writes in his book. ‘In certain situations, I am sure what you see is what you get. That’s a full-on, no-holds-barred Donald Trump. I have seen that side of him, too. But that’s not the man in his entirety.’

They spoke a few days ago. Trump always refers to him in private and in public as ‘the great John Lloyd, winner of three Grand Slam titles’. ‘It’s a bit mortifying,’ says Lloyd.

Lloyd prefers the Trump before he was President. He was more approachable then.

When they played golf during his presidency, Trump was flanked up the fairway by 30 Secret Service agents in golf carts. ‘If your ball was ahead of him, you had to pull over to the side while the President played through.’

Lloyd loves to tell his stories, so much that our hour-long interview overruns and we have to continue later in the evening. There’s the one about the time he nearly drowned in the Wimbledon baths. It was 1976 and he’d just lost to Phil Dent in the first round. He’d suffered from cramp in the match, so decided to soak in the dressing-room baths. ‘They were big and deep, you could almost swim in them,’ he says. ‘After about 20 minutes of going through every point in my mind, I reached for the soap and my hand cramped. Then into both my legs. Then my feet. Then into my arms and under my biceps, into my stomach. I was in complete agony. 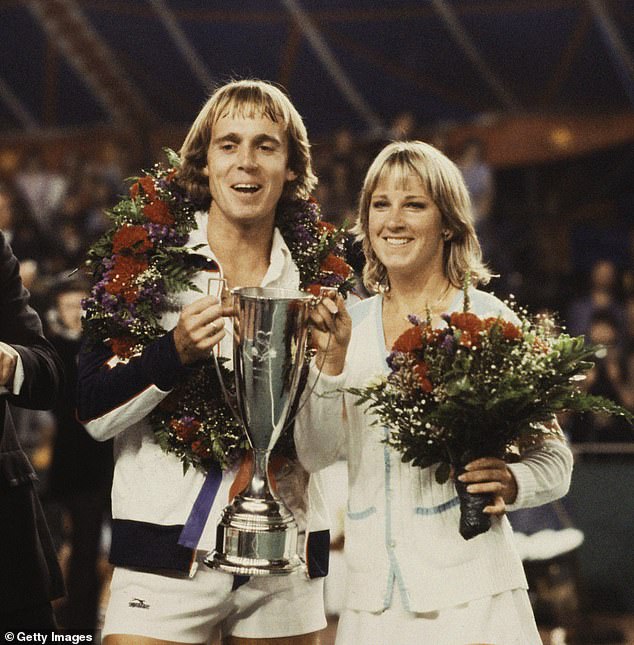 Despite many years in the limelight, the couple eventually separated and divorced in 1987

‘I felt like I was going to pass out. I tried to hoist myself out of the bath but I fell back in. Twice. Then I start slipping down. I can’t pull myself up and I’m thinking, s**t, I’m going to go under, I’m going to bloody die in this bath. People say your life flashes before your eyes. Mine didn’t. All I kept thinking was the headlines in the paper the next day: “British Player Commits Suicide After Devastating Loss”.’

Help, thankfully, was at hand in the form of Australian player Bob Carmichael. ‘He was smashed out of his mind and had come in to take a pee. He heard me and fished me out of the bath.’

Lloyd works in real estate in the US but will be back at Wimbledon this summer. In the commentary box, though, not the baths.

It’s still the best tennis tournament in the world, he says, but he wishes it wouldn’t take itself so seriously. He’s not a fan of the strict clothes policy. Why can’t Roger Federer have green soles on his shoes? Why shouldn’t women be allowed to wear coloured underwear? ‘It’s absolute nonsense,’ he says.

He marvels at the greats like Roger Federer and Andy Murray and how they deal with the pressure of the crowd. Murray, especially. All those eyes, the weight of national expectation.

He could never deal with it. Not in singles, anyway. Lloyd won two mixed doubles titles at Wimbledon with Wendy Turnbull but on his own he only once reached the quarter-finals.‘I didn’t enjoy it much,’ he says. ‘There was something I just couldn’t release. I put too much pressure on myself. That’s why I admire Murray. They embrace it. You’ve got to embrace that love, not hide away from it or fear it. I was more in fear of it.’

When he looks back, despite everything he achieved, he wishes it had been different. ‘My biggest regret is not doing myself justice at Wimbledon,’ he says. ‘The other one, even more important, is that my dedication to the sport was poor until the latter stages of my career. I can honestly say, I don’t think I ever gave it 100 per cent. Sometimes, it was quite a bit lower than that. I got to 21 in the world twice. I never really worked hard. Even if I had done, I wasn’t good enough to win a Grand Slam. I didn’t have the weapons for that. But I think I could have made the top 10.

‘I took the lazy way out and enjoyed the fruits of what I was doing. I had plenty of money and had a good time. I always say to the young people I coach now that you can still have fun and work hard. I went too far the other way.

‘I just didn’t dedicate myself to it and it’s stupid. It’s really stupid.’