John Major will take the stand in the case against Boris Johnson’s decision to suspend Parliament, it emerged last night.

In an unprecedented development, the former Conservative leader will appear at the Supreme Court on Thursday in a case which will decide whether Mr Johnson acted illegally by proroguing Parliament earlier this month.

Sir John will be a lynchpin in the case brought by pro-Remain businesswoman Gina Miller, who said the Prime Minister may have breached ‘the legal principle of Parliamentary sovereignty’ and that the act represented an ‘abuse of power’.

But Mr Johnson said it was ‘claptrap’ for people to say he had stopped MPs having their say on Brexit.

He told the BBC: ‘All this mumbo jumbo about how Parliament is being deprived of the opportunity to scrutinise Brexit.

‘What a load of claptrap. Actually, Parliament I think has lost about four or five days.’

And senior Tories last night claimed that the Prime Minister is ready to ignore a controversial law pushed through Parliament forcing him to seek another Brexit delay if a deal is not reached by October 19 – even if it means he is dragged to court.

Mr Johnson yesterday said another extension would be ‘crackers’ and insisted the law would not stop him taking the UK out of the EU next month – with or without a deal. 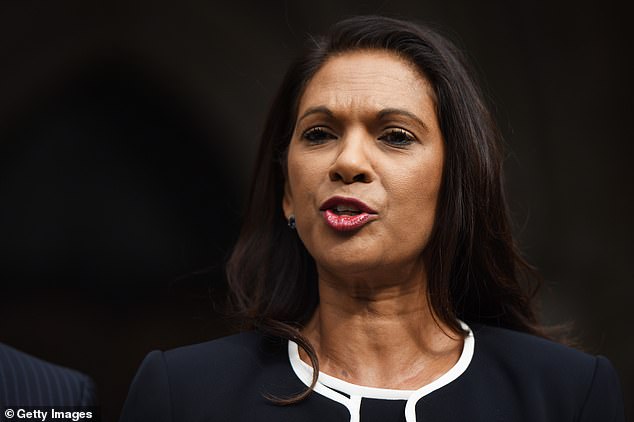 Sir John will be a lynchpin in the case brought by pro-Remain businesswoman Gina Miller (pictured), who said the Prime Minister may have breached ‘the legal principle of Parliamentary sovereignty’

Eleven supreme court justices will today begin to hear the claim that Mr Johnson acted unlawfully in advising the Queen to suspend Parliament for five weeks in order to stifle debate over the Brexit crisis.

Documents published by the Supreme Court yesterday show how the Prime Minister’s team will argue decisions to prorogue are a matter of ‘high policy’ and not law – meaning the courts should not intervene.

They revealed Sir John will make an ‘oral intervention’ for up to 20 minutes on Thursday. The former prime minister is listed as an ‘intervener’ on Miss Miller’s case, alongside Labour’s Baroness Chakrabarti.

Miss Miller’s written case said: ‘The Prime Minister’s advice to Her Majesty to prorogue Parliament for a period of five weeks is an unlawful abuse of power, because there has been no prorogation for longer than three weeks in the past 40 years and prorogation is typically for a week or less.

It adds that Mr Johnson’s reasons for advising the prorogation were ‘improper’ and influenced by ‘his concern that Parliament might take steps which would undermine the Government’s negotiating position with the EU’.

The case will be led in court by Lord Pannick, who led Miss Miller’s previous successful case forcing the Government to give MPs a vote on triggering Article 50.

The documents reveal Mr Johnson’s case is that the claims are ‘non-justiciable’ – meaning they are not within the scope of the courts.

The PM’s case points out that MPs could have legislated to ensure that Parliament continued to sit during the prorogation – but it did not do so.

And it highlighted that the Queen is under no obligation to accept the advice of the Prime Minister.