John McAfee says never goes anywhere unarmed – even while he sleeps, takes a shower and has sex

John McAfee says he’s always armed – including while he sleeps, takes a shower and has sex.

In a bizarre tweet Tuesday, the unhinged anti-virus inventor claimed ‘My sidearm is with me 24/7,’ while sharing photos of his gun in sitting in his shower and on the bathroom sink.

‘More: My sidearm is ALWAYS in my hand when I’m on the toilet, sleeping and making love,’ he continued.

He then goes into detail, writing: ‘Puts a kink in foreplay but some women love it. Accidental discharge? No. Some intentional when idiots tried to rush me. 2 women spontaneously orgasmed. Go figure.’

The 72-year-old is notorious for packing heat as he claims to have many ‘enemies’ trying to kill him, including the US and Belizean government. 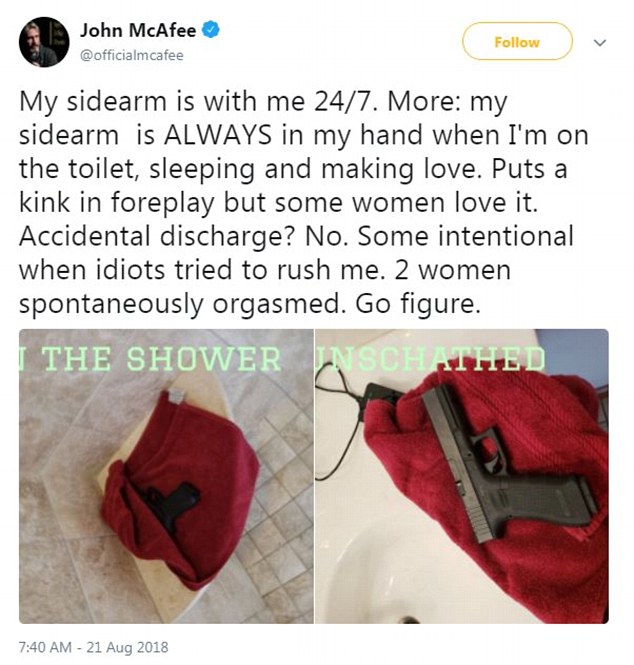 McAfee said it’s ‘ALWAYS’ in hand while ‘on the toilet, sleeping and making love’ 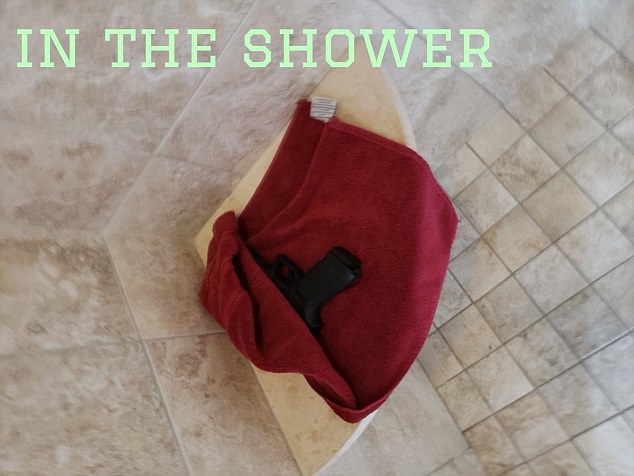 The unhinged 72-year-old shared photos of his firearm in his shower. He is notorious for packing heat and claims his ‘enemies’ are after him 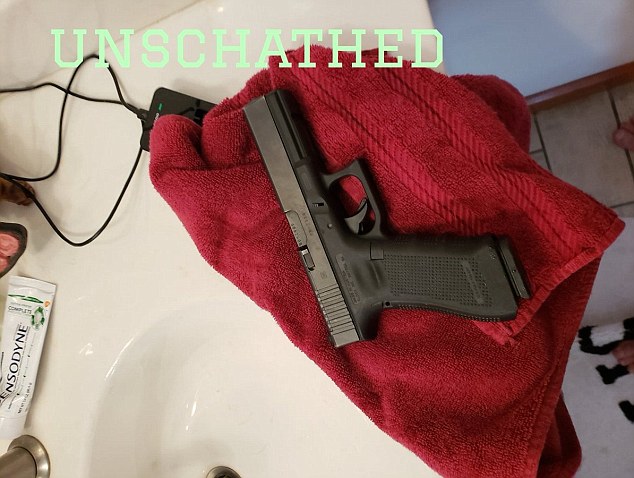 McAfee believes Belize wants him dead because he hacked in and stole secret government information, therefore he is always strapped

The British-born inventor built his reputation in cyber-security, with his first anti-virus software launched in the 1980s.

After resigning from his position at McAfee Associates in 1994, he sold his remaining stake in the company in 1996. Intel bought McAfee in 2010 and removed the McAfee name from the products.

The business mogul is no stranger to controversy, becoming an international fugitive in 2012 as he fled from Belize police over the murder of his neighbor.

McAfee’s was accused of murder his neighbor Gregory Faull, an American, was shot near his home.  Police believed it was McAfee because they allegedly butted heads over the inventor’s vicious guard dogs.

When police tried to question McAfee he had already fled the country. He went to Guatemala, where he was arrested on December 5, 2012, and deported to the United States.

McAfee was never indicted on any charges and has been avoiding the Belize authorities ever since.

He allegedly met his ex-prostitute wife Janice the day he landed in US.

In follow up tweets, he McAfee explained why he keeps his gun ‘in hand’ at all times

Though he claims to live in no fear, part of the reason he is always harmed is because he believes he has many ‘enemies’

Four years later, he ran for President of the United States as a representative for the Libertarian party – and achieved their best ever result.

He now operates MGT Capital which works to assess the value of cryptocurrencies.

In June, McAfee posted another bizarre tweet along with photos of himself recovering from a two-day coma after he claimed one of his ‘enemies’ tried to poison him.

‘I apologize for my three day absence but I was unconscious for two days… and just woke up,’ he wrote. ‘My enemies maged(sic) to spike something that i ingested.

‘However, I am more difficult to kill than anyone can possibly imagine. I am back.’

He also threatened to exact revenge on whoever was behind the alleged plot.

‘And for those who did this – You will soon understand the true meaning of wrath. I know exactly who you are. Youh(sic) had better be gone,’ he continued. 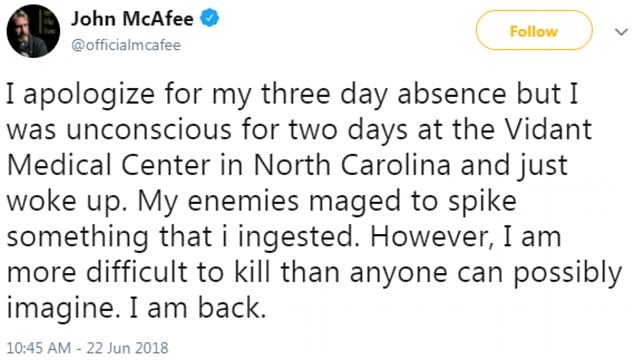 Anti-virus inventor John McAfee claimed one of his ‘enemies’ tried to poison him, leaving him in a two-day coma in June 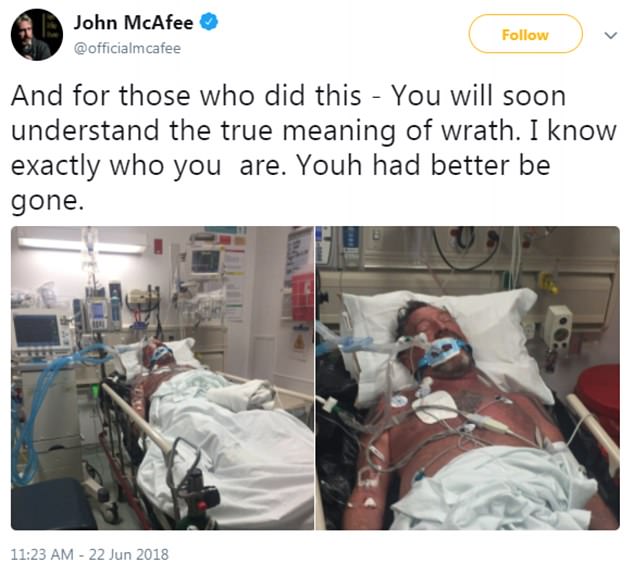 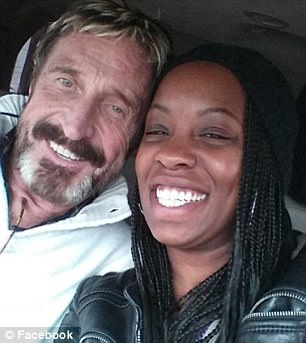 Lovebirds: John McAfee and Janice Dyson met in 2012 and married in 2013

Last September, the tech executive went on a naked shooting spree round his Tennessee home because he believed men sent by the Belize government were breaking in.

He believes the Central American nation wants him dead because he hacked in and stole secret government information.

McAfee had been having sex with his ex-prostitute wife Janice, 34, when he said he heard his dogs barking, and heard movement in the crawl space above.

He began firing his gun into the walls of his home and the commotion was under FBI investigation.

McAfee and Janice have lived in ‘constant fear’ of his assassination by the Belize government, and said he has ‘information’ he hacked and stole from the government after they raided his compound.

Belize authorities told Newsweek that claim is ‘utter nonsense,’ and the ‘ravings of a sick mind.’

These are just a few incidents among many in McAfee’s tumultuous life since he sold the company in the 1990s for roughly $100million.

He was employed as a programmer at Nasa in the late 1960’s.

Founded McAfee Associates in 1987 and released his anti-virus software.

After resigning from his position in 1994, he sold his remaining stake in the company in 1996.

Intel bought McAfee in 2010 and removed the McAfee name from the products.

In 2012, he was an international fugitive as he fled from Belize police.

Four years later he ran for President of the United States as a representative for the Libertarian party – and achieved their best ever result.

At the start of this year he announced plans to release a smartphone that is ‘the world’s first truly private smartphone’.

He operates MGT Capital which works to assess the value of cryptocurrencies.

After making the sale he quickly spent his fortune on nine luxurious homes, multiple planes, vintage cars, expensive art and other oddities – such as a dinosaur skull.

But in 2009 he allegedly lost most of his money in the financial crisis. McAfee denies going broke, but nonetheless liquidated his assets and moved to Belize.

In 2016, he was the subject of a Showtime documentary which details his two alleged murders and rape.

He accuses the director of ‘Gringo: The Dangerous life of John McAfee,’ Nate Burnstein, of ‘forcing interviews’ and ‘bribing’ people to lie.

While living in Belize he allegedly became increasingly paranoid and rarely came out of the house.

When he did, though, he surrounded himself with young women – mostly former prostitutes and an entourage of armed body guards.

His home was raided in 2012 by the Belize Police Gang Suppression Unit because he was suspected of cooking meth, but no drugs were found and he was never charged.

McAfee believes the raid was part of a conspiracy theory to ‘destroy him,’ because he refused to be extorted by the Belize government. 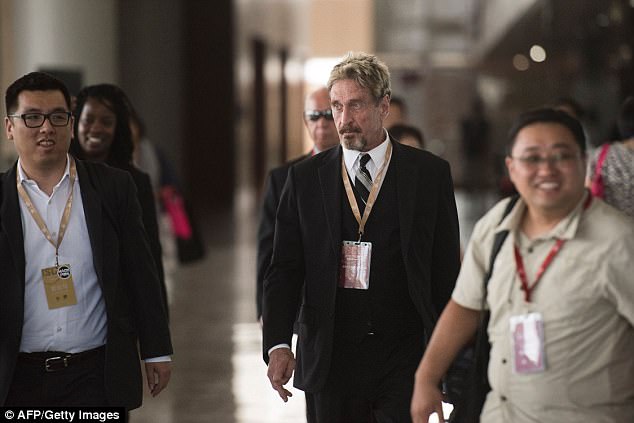 McAfee said he is being stalked by the Belize government, and claims they want to kill him because he hacked in and stole secret government information