PHOENIX (AP) – Sen. John McCain was eulogized as a “true American hero” – and a terrible driver with a wicked sense of humor and love of a good fight – at a crowded church service for the maverick politician Thursday that ended with the playing of Frank Sinatra’s “My Way.”

Addressing an estimated 3,500 mourners, former Vice President Joe Biden recalled “the sheer joy that crossed his face when he knew he was about to take the stage of the senate floor and start a fight.”

Biden, a Democrat who was among the fast friends the Republican senator made across the aisle, said he thought of McCain as a brother, “with a lot of family fights.”

The service for the statesman, former prisoner of war and two-time presidential candidate unfolded at North Baptist Church after a motorcade bearing McCain’s body made its way from the state Capitol past Arizonans waving American flags and campaign-style McCain signs.

Family members then watched in silence as uniformed military members removed the flag-draped casket from a black hearse and carried it into the church. McCain died last Saturday of brain cancer at 81.

At the church, a choir from the Jesuit-run Brophy College Preparatory school that two of McCain’s sons attended sang “Amazing Grace.”

McCain’s longtime chief of staff Grant Woods, a former Arizona attorney general, drew laughs with a eulogy in which he talked about McCain’s “terribly bad driving” and his sense of humor, which included calling the Leisure World retirement community “Seizure World.”

Woods also recalled the way McCain would introduce him to new staff members by saying, “You’ll have to fire half of them.”

Another friend, Tommy Espinoza, president and CEO of the Raza Development Fund, called McCain “one of the greatest American heroes in our lifetime.” The church’s senior pastor Noe Garcia pronounced McCain “a true American hero.”

Dabbing his eyes as he recalled his friend, Biden said McCain “could not stand the abuse of power wherever he saw it, in whatever form, in whatever country.” He said McCain embodied basic values including fairness, honesty and respect, and fought for civility between politicians even if they disagreed on the issues.

Biden also referred to his own son’s death from cancer, saying of the disease, “It’s brutal, it’s relentless, it’s unforgiving.” And he spoke directly to McCain’s widow, Cindy McCain, seated in the front row: “You were his ballast.”

Sinatra’s “My Way” paid tribute to a politician who became known for following his own path based on his personal principles. McCain clashed openly with President Donald Trump, who mocked McCain for getting captured during the Vietnam War.

Two White House officials said McCain’s family had asked, before the senator’s death, that Trump not attend the funeral services. Twenty-four sitting U.S. senators, four former senators and other leaders were among those expected at Thursday’s memorial.

The church service brought to a close two days of mourning for McCain in his home state.

Later in the day, a military aircraft was scheduled to take McCain’s body back east for a lying-in-state at the U.S. Capitol on Friday, a service at the Washington National Cathedral on Saturday, and burial at the U.S. Naval Academy in Annapolis, Maryland.

As the 11-vehicle motorcade with a 17-motorcycle police escort made its way toward the church, people along the 8-mile (13-kilometer) route held signs that read simply “McCain,” and cars on the other side of the highway stopped or slowed to a crawl in apparent tribute.

A few firefighters saluted from atop a fire engine parked on an overpass as the motorcade passed underneath on Interstate 17.

One man shouted, “We love you!”

On Wednesday, a private service was held at the Arizona Capitol for family and friends. McCain’s widow pressed her face against her husband’s coffin, and daughter Meghan McCain erupted in sobs.

An estimated 15,000 people filed past the senator’s casket to pay their final respects, and McCain sons Doug, Jack and Jimmy, daughter Sidney and daughter-in-law Renee shook hands with some of them.

On Thursday, Michael Fellars was among those awaiting the motorcade outside the church. The Marines veteran said he was also the fourth person in line Wednesday to attend the viewing at the Capitol for the Navy pilot held prisoner by the North Vietnamese for 5½ years after being shot down over Hanoi.

“He was about the only politician that I have ever known who cared for the people in his country, and he tried his level best to make it a better place in which to live,” Fellars said.

“He’s done so much for us,” said Costalez, who stood watch earlier this week while McCain’s body was at a funeral home. 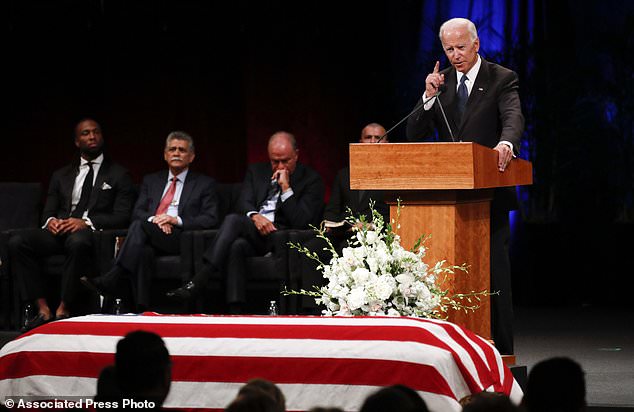 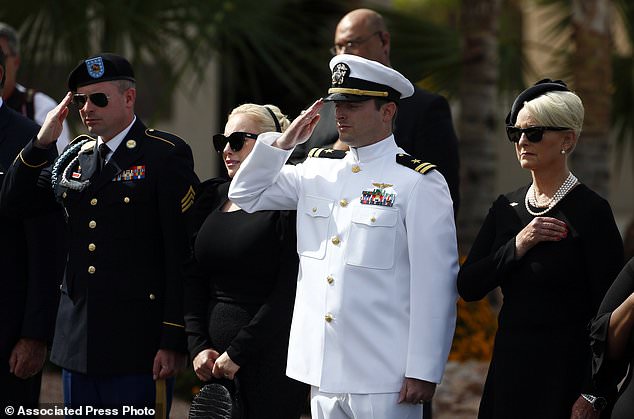 Cindy McCain, right, joined by her sons Jack McCain, and Jimmy McCain, left, and daughter Meghan, second from left, watch as the casket of Sen. John McCain, R-Ariz., is taken from the hearse as they all arrive prior to a memorial service at North Phoenix Baptist Church Thursday, Aug. 30, 2018, in Phoenix. (AP Photo/Ross D. Franklin) 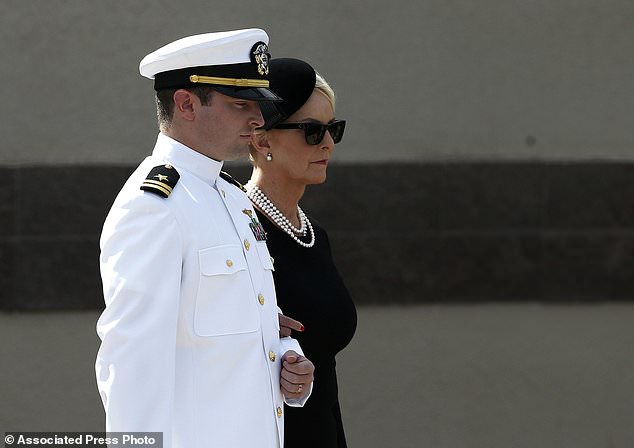 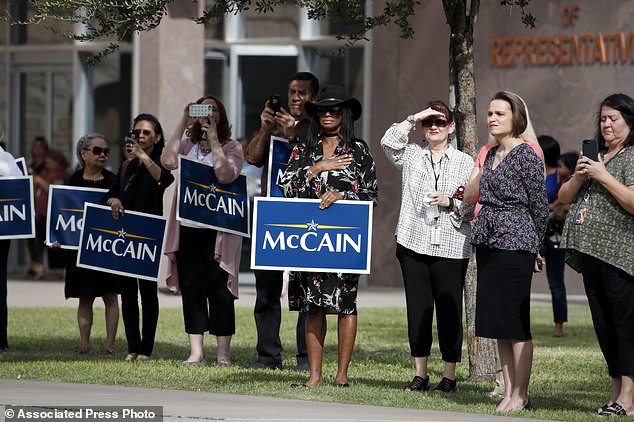 People watch a motorcade carrying the casket of Sen. John McCain, R-Ariz., as it travels from the Arizona Capitol to the North Phoenix Baptist Church for a memorial service on Thursday, Aug. 30, 2018, in Phoenix. (AP Photo/Jae C. Hong) 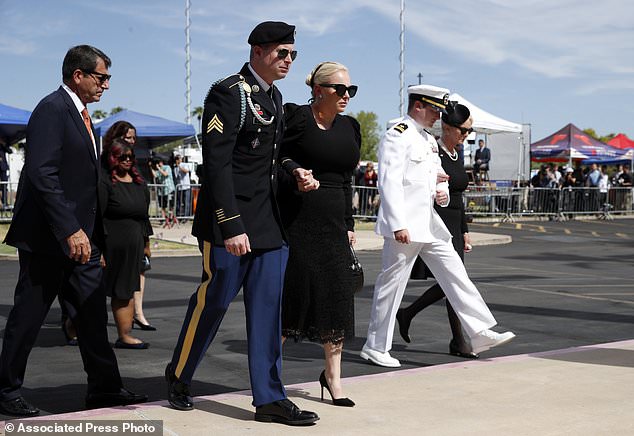