John McDonnell was accused of apeing the politics of Venezuela last night after he signalled that Labour would bring in an effective four-day week – without any loss of pay.

The Shadow Chancellor promised the average working week will be reduced to 32 hours within a decade under a Labour government.

And he vowed to introduce a new ‘Working Time Commission’, a quango which would meet regularly to recommend increases in minimum holiday entitlements.

Mr McDonnell, who received a series of ovations at the party’s annual conference yesterday, also unveiled a commitment to end in-work poverty within five years through a fundamental re-shaping of the economy.

And he pledged a series of other Left-wing measures such as rent caps, an end to the Universal Credit benefit scheme, ‘universal basic services’ provided free by the state, free public transport for under-25s and free school meals.

Critics last night warned that a four-day week would be disastrous for businesses, saying that his socialist plans would end the British jobs boom and turn the country into the equivalent of Venezuela or Zimbabwe.

In his speech yesterday, Mr McDonnell said Britons were working some of the longest hours in Europe and promised that would change. The average working week was 37.1 hours in 2018, according to Office for National Statistics figures.

Mr McDonnell said: ‘We should work to live, not live to work. In the 1860s people worked a 65-hour week. Thanks to past Labour governments – but actually mainly thanks to the trade union movement – by the 1970s the average working week had been reduced to 43 hours.

‘As society got richer, we could spend fewer hours at work. But in recent decades progress has stalled. Since the 1980s the link between increasing productivity and expanding free time has been broken. It’s time to put that right.’

The move, which was welcomed by trade unions, will involve setting up an independent Working Time Commission to decide the number of days holiday people should have. Collective bargaining will enable unions and employers to negotiate how to meet the target in each sector of the economy.

There would not be a French-style cap on weekly working hours, instead progress to the 32-hour goal would be assessed based on the annual average figure compiled by the ONS.

TUC general secretary Frances O’Grady welcomed the commitment and said: ‘It’s time for working people to share in the benefits of new technology.

‘That’s why unions have been arguing for less time at work, more time with family and friends and decent pay for everyone.’

But Confederation of British Industry director-general Carolyn Fairbairn warned the plan to reduce average hours could hit firms and was scathing about some of Mr McDonnell’s other policies which ‘risk hanging a ‘closed’ sign on the door of our open economy’. 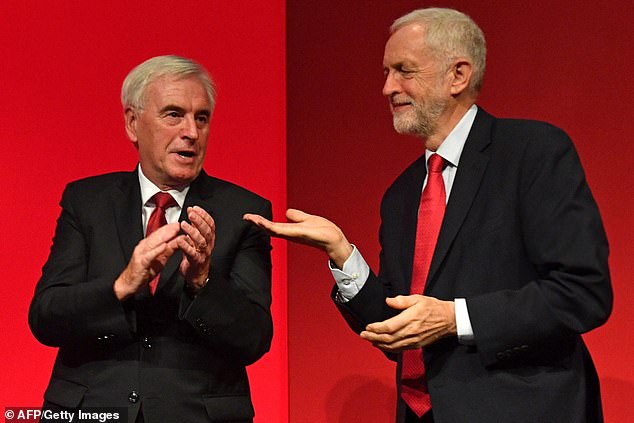 She said: ‘Business shares the Shadow Chancellor’s aim of a fairer economy. But too many of Labour’s policies would make this harder to achieve, harming the very people they are trying to help. Who would turn down a four-day week on the same pay? But without productivity gains it would push many businesses into loss.’

Edwin Morgan, of the Institute of Directors, said: ‘Labour’s working week policy may be eye-catching, but it puts the cart before the horse. The only way to reduce hours while maintaining pay is by improving productivity.’ Matt Kilcoyne, of the Adam Smith Institute, said: ‘The Labour Party should think long and hard about their name. They’ve gone from fighting for workers’ rights to pushing policies that will put them out of work.’

He said Mr McDonnell would end up putting companies out of business and workers on the dole.

‘We now know the Labour Party plans to outspend the Tories in every possible way, and pay for it using everyone else’s money.

‘The result in the UK will be just the same as it was in Venezuela and Zimbabwe – spending beyond your means will mean businesses fleeing the country, your pensions raided and worthless, an end to the jobs boom, inflation up and investment crashing. We’ll all end up poorer for the Labour Party’s promises.’

In March, YouGov found a four-day week was backed by the public – with 63 per cent in support. But if told this could harm the economy, support fell to 17 per cent.

Rishi Sunak, the Chief Secretary to the Treasury, said: ‘John McDonnell offers nothing but failed ideas which would wreck our economy, harm businesses and drive out investment.

‘Far from delivering for the many, McDonnell’s damaging plans would leave families with less money in their pockets and fewer jobs.’