John McDonnell Labour could get a ‘unity Brexit’ agreed by MPs

Labour could get a ‘unity Brexit’ agreed by Parliament if Theresa May abandons her ‘botched’ deal, John McDonnell claimed today.

The shadow chancellor said the Labour version of Brexit – which includes a permanent customs union – would be backed by a majority of MPs.

The Prime Minister’s proposed Brexit deal is hated by MPs on all sides and was derided as ‘botched’ by Jeremy Corbyn yesterday.

Labour has demanded she call an election and let Mr Corbyn get on with negotiating his own version of Brexit.

But amid Mrs May’s efforts to cling on, Labour’s deputy leader Tom Watson said a second referendum was now  ‘more likely than ever’.

Mr McDonnell said today a ‘unity platform’ was emerging at Westminster to avoid the ‘catastrophic’ impact of a no-deal break with the EU.

‘I think we can secure a majority,’ he told the BBC Radio 4 Today programme.

‘People have looked over the edge of a no-deal Brexit and realised it could be catastrophic for our economy.

‘Our European partners, I think, also have looked over the edge of a no-deal Brexit and seen what an impact it could have on their economies.

‘So I think what is emerging within the House of Commons now is almost a unity platform to avoid a no-deal.’

Mr Watson told the House magazine: ‘We’ve been saying that is on the table for a year-and-a-half. At that time, it seemed very unlikely that there would be a people’s vote, that was the insurance option at the end of a series of unlikely events.

‘Given the weakness of her own government, I think it is more likely that we could get there.’ 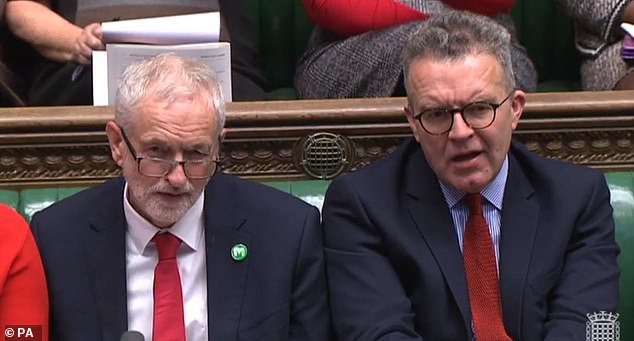 Mr Watson said the point was approaching where Parliament was unable to decide on a Brexit course.

He said: ‘If you get to the point, and it’s looking more likely, where Parliament cannot decide what the best option is, we think that’s the point where you go to the people in a general election.

‘They voted to leave the European Union, they didn’t vote for food shortages or problems with medical supplies or not to be able to sell goods to the European markets. They voted to bring sovereignty back to the UK.

‘If that plan isn’t going to work the way to do it is to put your option to the people in a general election.

‘If we don’t get that, then obviously a people’s vote is still on the table and our position has not changed.’