In response to Mike Pence’s family’s book about their pet rabbit, Marlon Bundo, Last Week Tonight’s John Oliver has published a parody book about the rabbit entitled A Day in the Life of Marlon Bundo, and features Bundo falling in love with a male rabbit.

And it’s already proven to be a huge success after it was revealed that Last Week Tonight’s book has already outsold the Pence family’s.

It all started with a segment on the latest episode of Last Week Tonight, when John Oliver took Vice President Mike Pence to task over his views on everything from women in the military to gay rights. The HBO show’s host said: ‘While Pence may claim that he did not and does not support gay conversion therapy, he very much supports those who support it.’

Oliver then turned his attention to the Pence family pet rabbit, Marlon Bundo, pointing out that he has his own Instagram account and now a children’s book to boot.

The book, entitled Marlon Bundo’s A Day in the Life of the Vice President, was written by Mike Pence’s daughter, Charlotte Pence, and illustrated by his wife, Karen. It was released on March 19, 2018 and follows the adventures of BOTUS (Bunny of the United States) as he ‘hops after “Grampa” (Vice President Mike Pence)’.

However, in a segment on Sunday, John Oliver revealed that his show too wrote a book about Marlon Bundo.

‘It turns out, in a complete coincidence, we also wrote a book about Mike Pence’s rabbit, that has also been published,’ before going on to say that while Pence family’s book would be released on Monday, March 19, his show’s book was released at that exact moment – on Sunday, March 18.

‘While his is out tomorrow, ours is released…right now.’ 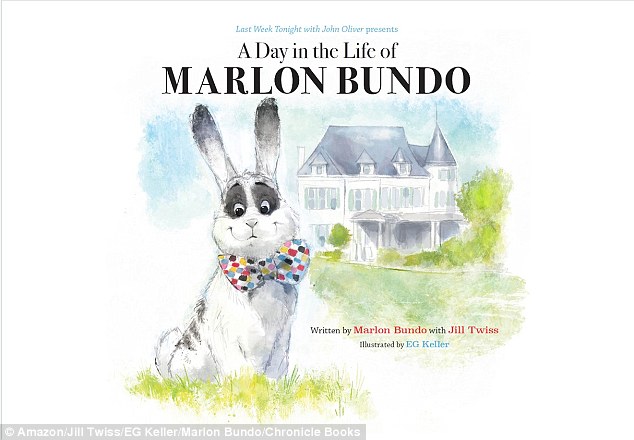 The former Daily Show correspondent then explained how his book, written by Last Week Tonight writer Jill Twiss, differs from the Pence family’s. Oliver jokes that unlike Pence’s story, his show’s Bundo has a bow-tie, before revealing that his Bundo actually falls in love with another ‘boy rabbit’.

All the money raised by the book would go to The Trevor Project, which focuses on suicide prevention efforts among the LGBTQ youths, and AIDS United, which aims to end the AIDS epidemic in the US.

Oliver says that these charities are two great reasons to purchase the book, before adding that another reason would be that ‘selling more books than Pence, would probably really piss him off. So that’s three great reasons’.

And it looks like that goal has been accomplished after just one day. A Day in the Life of Marlon Bundo currently sits at No.1 on the Amazon Best Sellers in Children’s Books, with Marlon Bundo’s A Day in the life of the Vice President coming in at No.3. However, Pence’s book is in third only because the Kindle edition of John Oliver’s book is in No.2.

Oliver also said that there is an audiobook version of his book, which features the Big Bang Theory’s Jim Parsons as Bundo and John Lithgow as a stinkbug that may, or may not, look a whole lot like Mike Pence.

However, it looks like the real Marlon Bundo is taking John Oliver’s book in its stride, with the Pence family posting on Instagram a pic of Bundo wearing a multi-coloured bow-tie.

The Pence family’s book is raising money for Tracy’s Kids, an art programme for children with cancer, and A21, an organisation that fights human trafficking.