John Terry plans to grow a ‘wildlife corridor’ with 140 varieties of exotic plants and trees as he develops his £20million housing project in Surrey.

The former footballer, 41, who has become an established property developer, plans to demolish a £4.5million mansion he owns – Tandem House -and replace it with two homes (one five bedroom and one six bedroom) worth £10million each on the affluent Crown Estate in Oxshott, Surrey.

In order for the project to proceed amid strict planning conditions, and due to plans to fell trees, the sportsman has created a ‘biodiversity mitigation strategy’  to compensate for damage to wildlife and an existing pond, reports The Sun.

Plans have been submitted showing the star’s plans to build a ‘nature pond’ and create ‘new wildlife friendly planting’ to provide ‘a range of habitats for local species and act as wildlife corridors’ for local wildlife.

Wow: John Terry plans to grow a ‘wildlife corridor’ with 140 varieties of exotic plants and trees as he develops his £20million housing project in Surrey (top left) – also shown are two other properties Terry owned in the area

The wildlife he plans to plant include Carpinus betulus, Cercis canadensis and Lamium maculatum ‘White Nancy’.

Terry also plans to install ‘bat and bird boxes at suitable locations to enhance roosting and nesting opportunities’ with a row of hedges separating the plots and trees by the entrance gates.

The wildlife corridor will include a mix of small plants and larger trees, hedges and topiary. 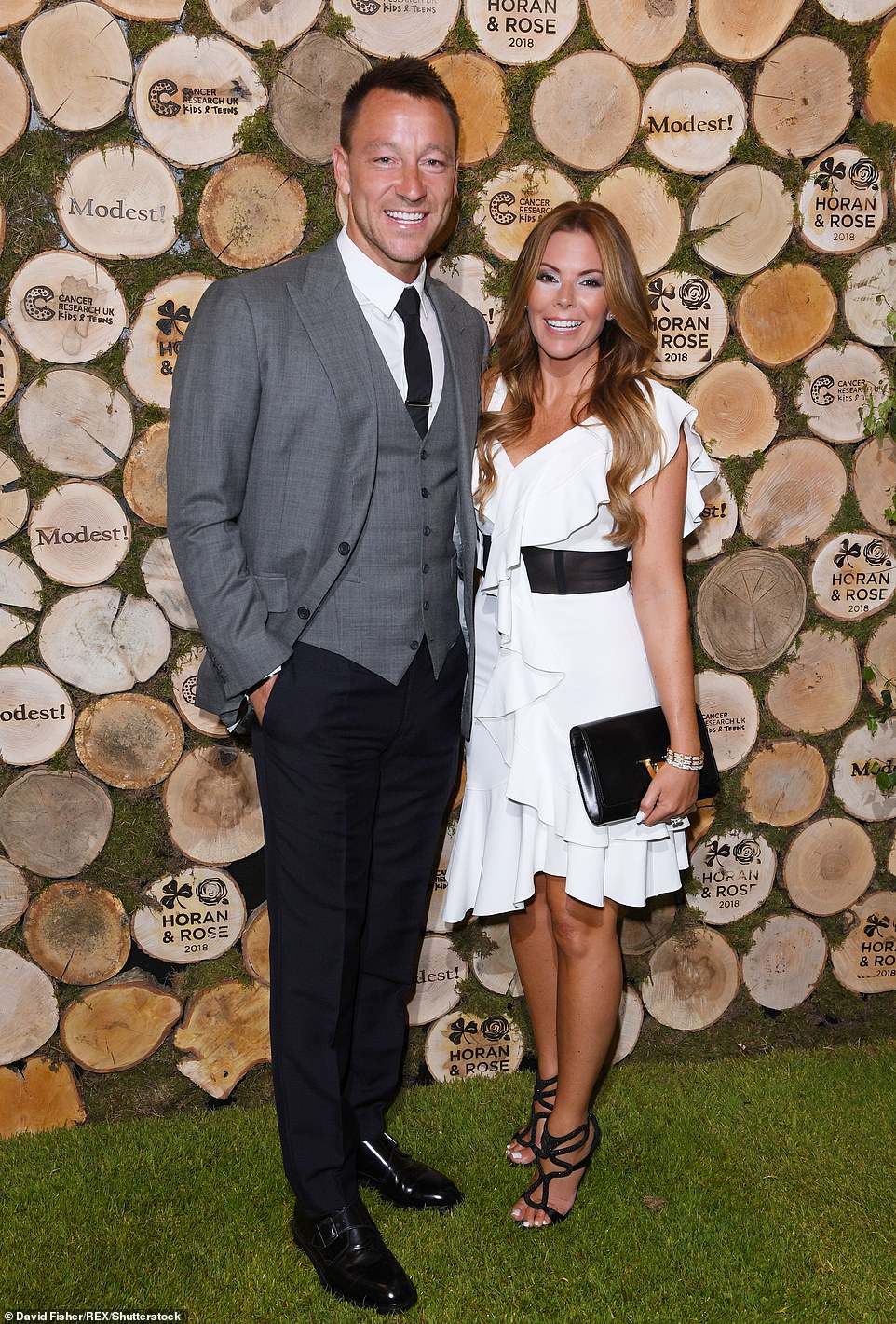 Power couple: The former footballer, 41, who has become an established property developer, plans to demolish a £4.5million mansion he owns – Tandem House -and replace it with two homes (one five bedroom and one six bedroom) worth £10million each on the Crown Estate in Oxshott, Surrey (pictured with wife Toni jn 2018)

The new six bedroom home will include a circular drive, gym and swimming pool.

John lives in Cobham with wife Toni and their twins Georgie and Summer in a a £4.35million mansion.

He snapped up the sprawling seven-bedroom 18th century manor house in 2019.

John’s impressive property is set in eight acres of land, just a stone’s throw away from his old club Chelsea’s training ground.

It has a library, stables and tennis court, yet the former footballer and wife Toni are still keen on extending it more with lavish renovations. 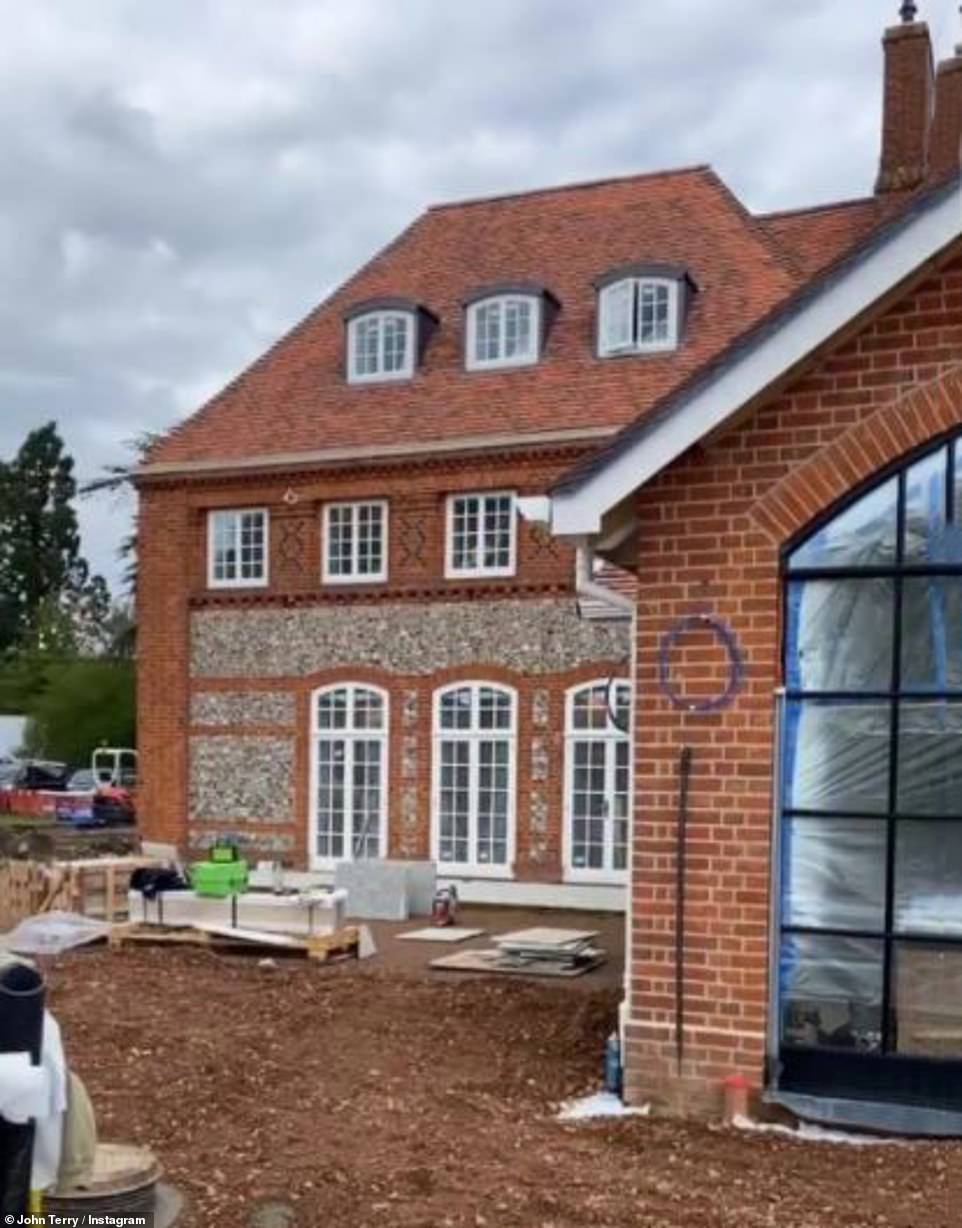 Amazing: Last year John gave fans a glimpse at the lavish renovations at his £4.35m Surrey mansion which include a wine and cigar room, swimming pool and luxury kitchen

The property is said to be the former footballer’s fifth in the area after having involvement with four others on the nearby Crown Estate, one of Britain’s most expensive areas to live.

In October 2020, it was claimed that John had lost his planning battle with neighbours to build a huge garage and poolside party bar.

The ex-Chelsea defender wanted to revamp the garage at his £4.35million Surrey mansion, so it can house his flash motors such as a Ferrari 275 GTB and a £2 million Enzo. He also planned to build an outdoor party space by his pool – with a covered seating area and bar.

Terry wanted to add a staff quarters to the garage, at the 18th century seven-bedroom pad he and wife Toni bought in 2019.

But after furious opposition from angry neighbours, Guildford Borough Council planning chiefs stuck the boot in to the star’s grand proposals.

They said neither the triple garage or outdoor party area was allowed in that part of Surrey – which has been designated Green Belt to protect it from further development.

In the decision report, case officer Chris Gent said: ‘The proposed replacement garage, by virtue of its size, height, bulk, mass, position and floor area, would be materially larger than the building it is to replace and would have a greater impact on the openness of the Green Belt than the existing development.

He added: ‘No very special circumstances have been demonstrated which would outweigh the inherent harm to the Green Belt.’

The Premier League star wanted to replace the garage with a larger one to house his expensive car collection.

‘And a single-storey covered outdoor seating area – open to each of its four sides – adjacent to the outdoor pool area, following the demolition of the existing garage and a single-storey domestic storage outbuilding.’

The garage would have been 111sq/metres with 460 metres of volume.

The plans read: ‘The existing garage is too small to easily accommodate larger vehicles, modern day 4x4s and SUVs and storage of cycles. The materials for the existing buildings are not sympathetic and do not match the main house.

‘The proposed development represents an attractive and well-proportioned building which will use traditional materials that match the existing main house and therefore represents an enhancement compared to the existing buildings.

‘The outdoor covering seating area is a simple open-sided structure with four timber posts at each corner supporting a pitched roof with a low brick wall along the rear side and a brick chimney.’

John’s application also claimed that neighbours’ privacy will not be infringed upon. 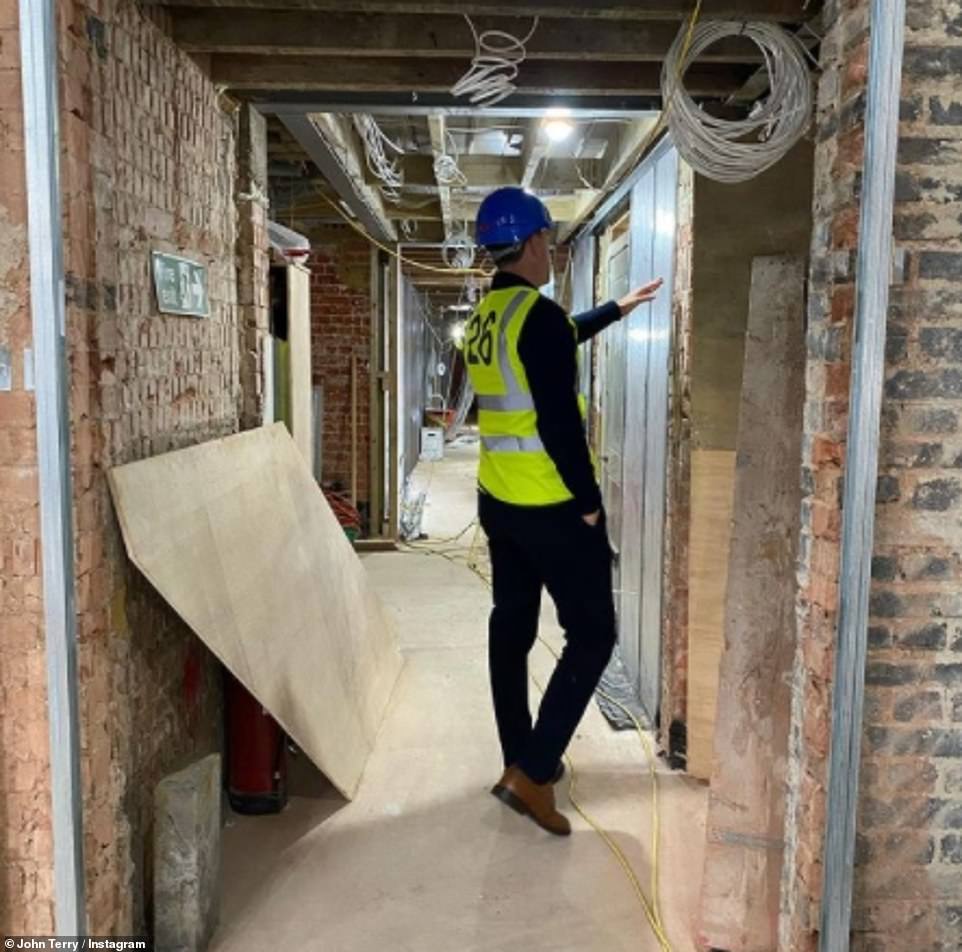 Renovations: John bought the plush pad for £4.35million in 2019 and the 18th century house is set in eight acres of land, just a stone’s throw away from his old club Chelsea’s training ground in Cobham, Surrey (pictured in February wearing his old shirt number 26 on a high vis jacket)

It adds: ‘The replacement garage and covered outdoor seating area are more than 25 metres from the nearest neighbouring houses to the south-east.

‘There are no windows proposed in the rear or side elevations of the garage and thus there would be no overlooking or loss of privacy to the neighbouring properties.’

He acquired golfer Colin Montgomerie’s house for £6.5 million in 2014 which boasts a two-bed staff annexe, four reception rooms and six-bathrooms.

He downsized from a nine bedroom mansion that year, selling the home for £16million – making a £10million profit – to Sultan Qaboos bin Said, who is worth an estimated £530million.

He sold a nine bedroom red-brick house in Oxshott in 2013 for £5.25million after three years on the market. He first bought the home in 2003. 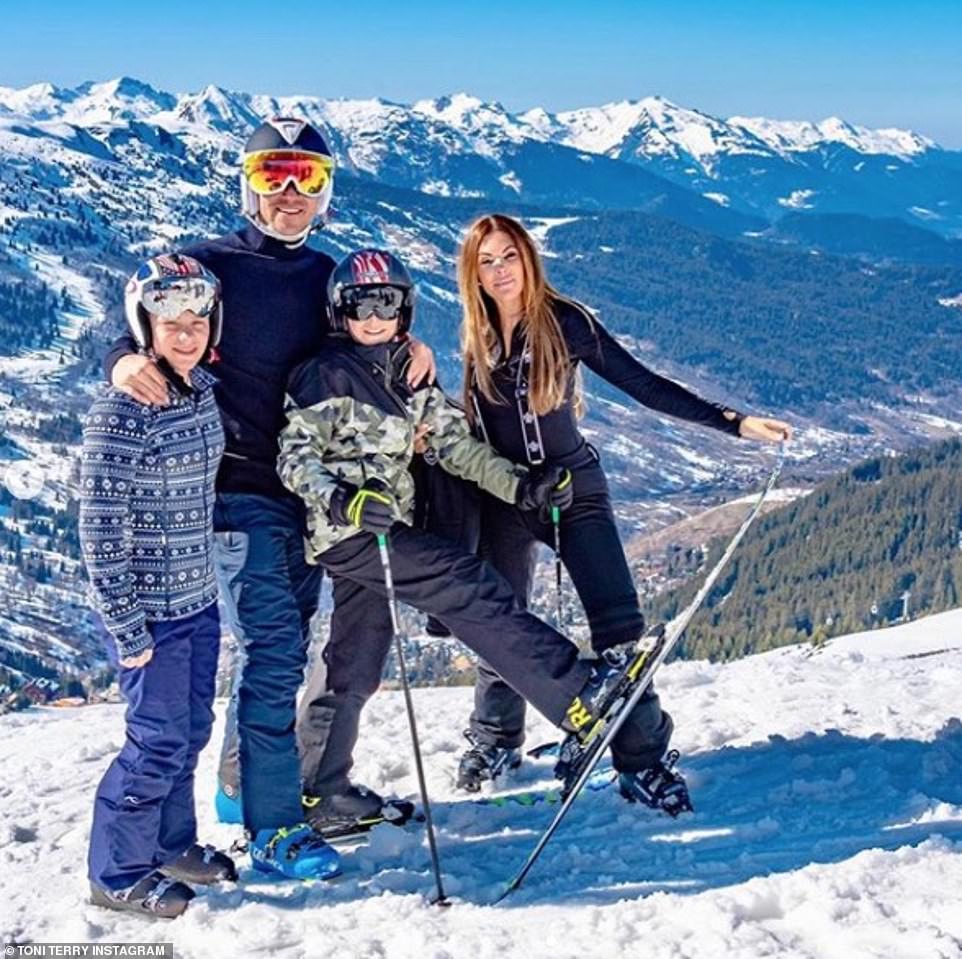 Family: He has been married to wife Toni since 2007 and in 2006 they welcomed twins Summer and Georgie, now 15