Johnny Depp claims that his ex-wife Amber Heard ‘put a cigarette out’ on his cheek in an alleged fight, during which he also says she threw a bottle at him that severed his finger.

The 56-year-old actor’s latest allegations come in an amended response as part of his libel lawsuit against News Group Newspapers Limited, which owns The Sun, and columnist Dan Wootton over a 2018 article that labeled him a ‘wife-beater,’ The Blast reported.

Depp claims the March 2015 brawl in Australia started after Heard, 32, heard him speak with his attorneys about his ‘intention to enter into a post-nuptial agreement,’ according to court documents obtained by The Blast.

The ‘Pirates of the Caribbean’ star says this caused Heard ‘to go into a rage’.

This photo, obtained by The Blast, reportedly shows Johnny Depp on a hospital stretcher with what his legal team claims is the cigarette burn inflicted by Amber Heard on his right cheek in Australia in 2015 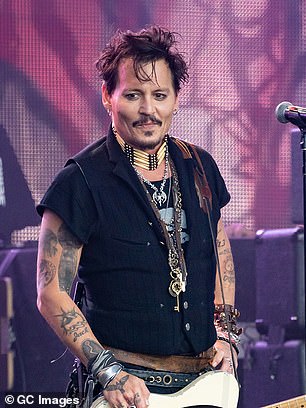 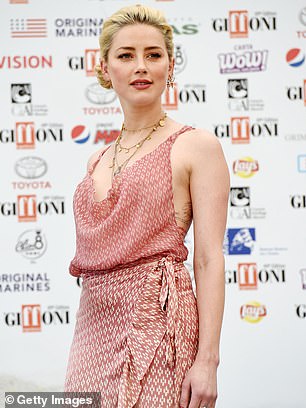 In court documents obtained by The Blast, Depp (pictured in June) claims his ex-wife Amber Heard (pictured on Thursday) ‘put a cigarette out’ on his cheek in an alleged fight

The document states that Depp tried to avoid Heard ‘by going to the downstairs bar in the house. She followed him, screaming at him abusively.’

Depp claims ‘he poured himself a vodka and drank it,’ when Heard threw a bottle at him and missed.

He claims he had another drink and Heard hurled the second bottle at him, which severed Depp’s finger.

‘Ms. Heard then put a cigarette out on [Depp’s] right cheek,’ the document says, according to The Blast.

The celebrity news site obtained a photo of Depp that was taken in an Australian hospital a few hours after the alleged fight.

It shows the actor laying on a stretcher, with his finger on green gauze and with what his legal team claims is the cigarette burn on his right cheek.

The actor’s attorney Adam Waldman said in a statement obtained by PEOPLE: ‘Today we replied in court to the Sun’s cut and paste ‘defense’ of Amber Heard’s latest abuse hoaxes.’

‘And we detailed more evidence of Amber Heard’s vicious violence against Mr. Depp, who was the actual domestic violence victim in the relationship.’

‘There is more evidence to come,’ the statement continued. ‘Yet Ms. Heard remains propped up by hoax-enablers, including Rupert Murdoch’s tabloid the Sun. Does the #metoo movement care about male victims too?’

Heard’s attorney Eric George hit back that the ‘allegation is absurd, offensive and categorically untrue’.

‘This photograph proves nothing – apart from the fact that Johnny Depp is desperate to throw out any outlandish allegation to deflect attention from his physical and ongoing psychological abuse of Amber Heard.’ 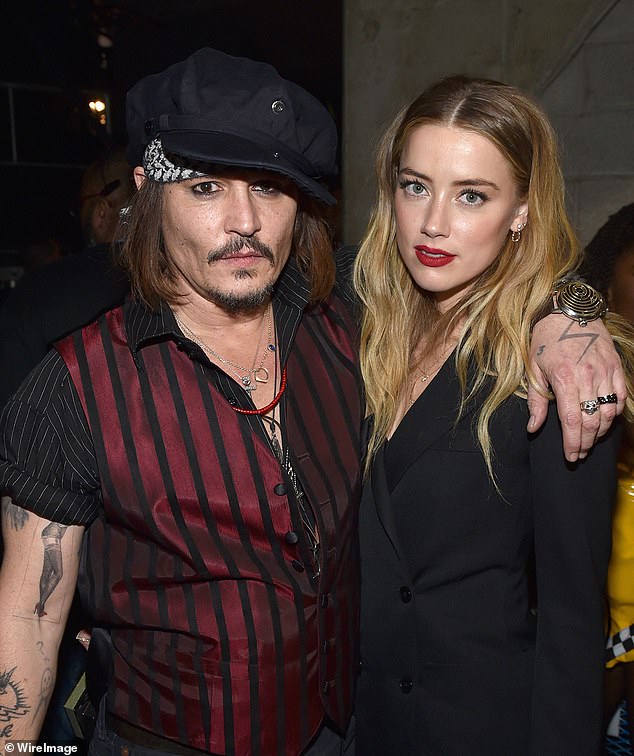 Depp filed a defamation case against Heard in 2018, calling her accounts of abuse ‘fabricated’ and ‘categorically’ false. They are seen in February 2016

In 2018, Depp accused Heard of defamation over a Washington Post op-ed where the actress wrote about her experience with domestic abuse, an account which Depp claims implied he was the perpetrator.

The actor contended that the piece was defamatory because it ‘depends on the central premise that Ms. Heard was a domestic abuse victim and that Mr. Depp perpetrated domestic violence against her’.

His legal team went on to say how her accounts were ‘conclusively refuted by two separate responding police officers, a litany of neutral third-party witnesses, and 87 newly obtained surveillance camera videos’.

Depp is asking for $50 million in damages, alleging the essay negatively affected his career, including being dropped from his iconic role as Captain Jack Sparrow in the ‘Pirates of the Caribbean’ film franchise.

In addition to calling her accounts of abuse ‘fabricated’ and ‘categorically’ false, Depp has alleged that Heard was actually physically abusive to him.

In May, Depp submitted court documents with photos of injuries he accused Heard of inflicting.

He provided a shocking account, claiming that ‘while mixing prescription amphetamines and non-prescription drugs with alcohol’ Heard ‘hit, punched, and kicked me’.

‘She also repeatedly and frequently threw objects into my body and head, including heavy bottles, soda cans, burning candles, television remote controls, and paint thinner cans, which severely injured me.’

‘Ms. Heard is not a victim of domestic abuse; she is a perpetrator,’ Depp’s documents went on to state. 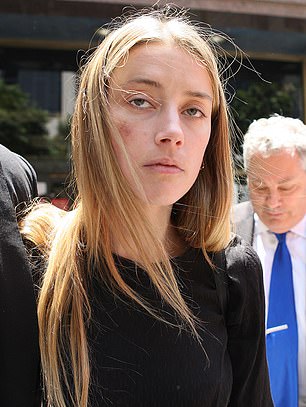 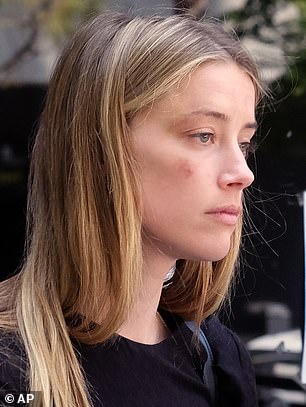 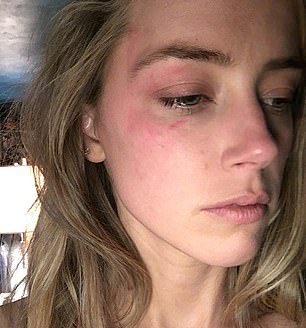 After Amber Heard filed for divorce from Johnny Depp images emerged at the time showing her with a bruised eye and face. Depp has claimed these were ‘painted-on’

In the court documents obtained by The Blast, Depp refutes Heard’s claims of alleged abuse.

Heard said that in May 2014, Depp became enraged because she was filming a movie with James Franco and began throwing objects at her during a flight on a private jet.

‘At some point I stood up, and Johnny kicked me in the back, causing me to fall over,’ she wrote in her response to Depp’s defamation lawsuit.

‘Johnny threw his boot at me while I was on the ground. Johnny continued to scream obscenities until he went into the plane bathroom and passed out locked in the bathroom for the remainder of the flight.’

But Depp now claims Heard was verbally harassing him and he tried to calm her by stretching ‘his leg out to playfully tap her on the bottom with his foot’.

He claims Heard ‘took great offence at this harmless act and continued to verbally berate’ him. Depp says he then went ‘to the plane’s bathroom, locked the door and slept on the floor with a pillow.’

Depp also denies Heard’s claims in the same declaration that he kicked and slapped her — and also kicked a hole in the door — during a fight in the Bahamas in August 2014.

Depp says the purpose of the trip was ‘to cure his dependence on painkillers’ and that he ‘required 24 hour medical care and was frequently sedated because of the physically painful process of withdrawal’.

The actor claims that what Heard called ‘manic episodes’ were actually ‘spasms and withdrawals;’ caused by her intervening and withholding medicine from him.

In the document, Depp admits that he ‘wrote on a mirror and walls in blood and oil paint’ but says he was in shock, and denies urinating in the house or taking ecstasy.

Depp was handed a small victory in his $50 million defamation lawsuit on Thursday, when a judge in Virginia refused to move the lawsuit from the Old Dominion to California, as Heard had requested. Neither her nor Depp live in the state.

The judge apparently agreed with the ‘Fantastic Beasts’ actor that since Heard’s Washington Post op-ed had been published in the Virginia-based newspaper that the case would remain there. 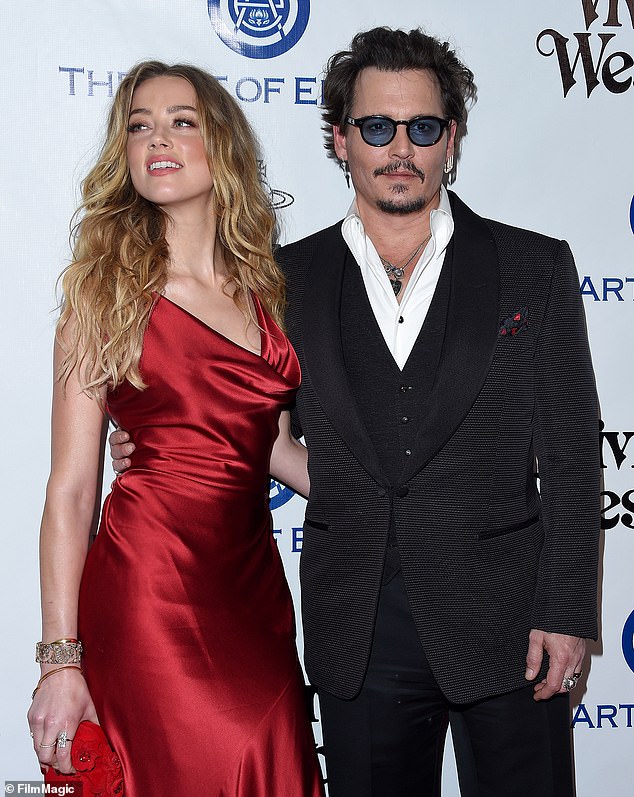 Depp and Heard (pictured in January 2016) first met on the set of their film The Rum Diary in 2011. They were married in 2015 but by May of 2016, Heard filed for divorce citing irreconcilable differences

In the piece, Heard said she lost an acting role and contract with a major fashion brand because went public with her claims of abuse.

‘I spoke up against sexual violence — and faced our culture’s wrath,’ the 32-year-old actress wrote, adding that she felt as those she was ‘on trial in the court of public opinion’.

Though Heard did not explicitly name Depp as her abuser in her Washington Post piece, she offered meticulously detailed accounts of abuse during the couple’s divorce proceedings in 2016.

During the divorce, she presented photos of herself with bruises on her face and body, as well as photos of trashed rooms and text messages recounting the violent incidents.

She also detailed a 2016 incident where the actor allegedly attacked her at their downtown Los Angeles penthouse.

The incident led to Heard being granted a temporary restraining order against Depp.

Depp and Heard reached a $7 million settlement by August of that year. Heard reportedly donated her portion of the settlement to the ACLU and Children’s Hospital Los Angeles.

After the settlement Heard retracted her abuse allegations.

In a joint statement, Heard and Depp called the union ‘intensely passionate and at times volatile, but always bound by love’.

‘Neither party has made false accusations for financial gain,’ they continued. ‘There was never any intent of physical or emotional harm. Amber wishes the best for Johnny in the future.’

Their settlement reportedly included a non-disparagement agreement between the two parties.

Depp and Heard first met on the set of their film The Rum Diary in 2011.

They were married in 2015 but by May of 2016, Heard filed for divorce citing irreconcilable differences.