Amber Heard has described having to use makeup to cover up her injuries inflicted by Johnny Depp while appearing on James Corden’s chat show.

The actress said she thought she was going to die when she claims Depp headbutted and tried to suffocate her with a pillow.

The next evening in December 2015, she appeared on The Late Late Show to promote her film The Danish Girl, and said she had to hide her cuts and bruises. 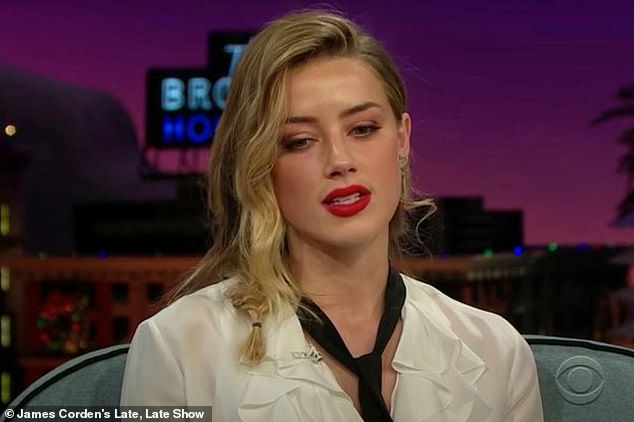 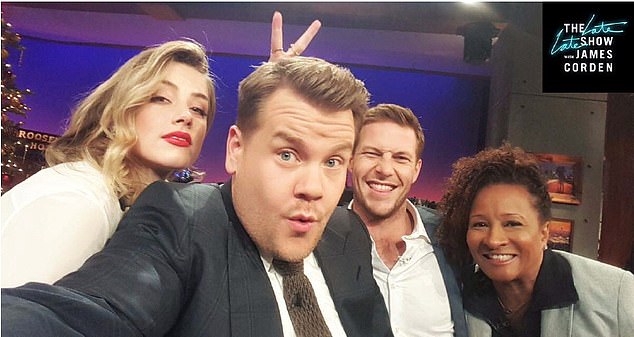 Heard poses with guests Luke Bracey and Wanda Skyes on the Late, Late Show with James Corden on December 16, 2015

She told the court in her blockbuster defamation trial that her make-up team had to work around the wounds and apply ‘super heavy, red matte lipstick’ to hide her bloodied lip.

She said: ‘I got worried that I wouldn’t be able to hide the bruising and swelling. I iced it all night and the next day checked in the mirror to see if I could get away with it, meaning hiding it, so I could make an appearance.

‘I gambled and thought maybe I could pull it off, I had my hair and makeup team come. They worked around it, meaning worked around the lesions on my head with the hair spray because that stings.

‘They worked around the bruising by covering it with heavy makeup, heavier makeup than normal bruise covering makeup.

‘I remember my lip was still bleeding and swollen so we did this really thick super heavy matte red lipstick and I remember very well at the time that we had no choice in color, and that was one of my favorite colors to wear

‘On this occasion we had no choice because we had to hide my busted lip.

She added: ‘I did what I always did: I told people that I had an accident.’

Describing the previous night’s violence, Heard told the jury yesterday how Depp repeatedly punched her head and dragged her by the hair.

She said that he told her: ‘You really want to go now, tough guy’ before punching her.

She said: ‘I look him right in the eyes. It was a really still moment.’

‘(He said) you want to go again, tough guy. I looked right up at his face, he balled up his fists, leaned back and headbutted me square in the nose. 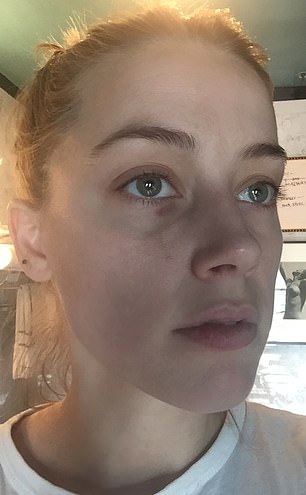 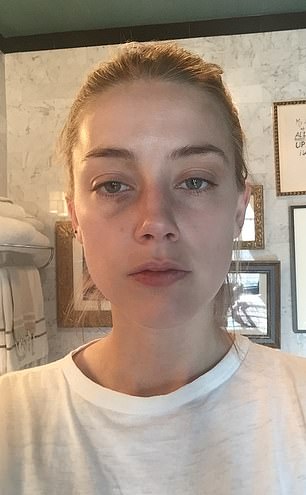 Heard claimed that during the fight in December 2015 Depp headbutted her and beat her so badly she thought she would die. These photos of Heard’s bruised face were submitted into evidence 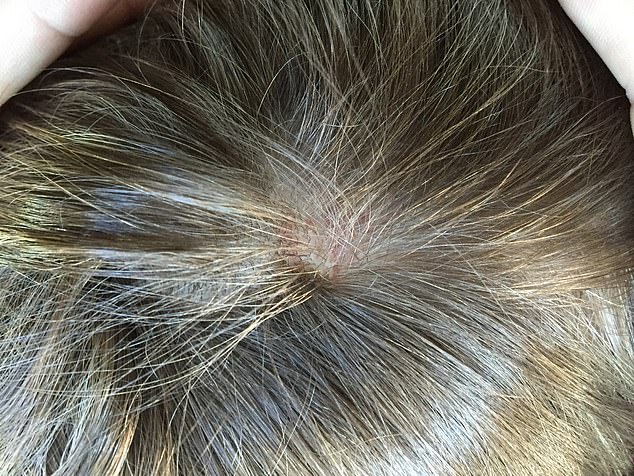 She said: ‘He had his hand on the back of my hair and was yanking me down and hit me in the face with this cast.’ Heard’s scalp with missing hair is shown

‘Instantly (I felt) searing pain, It’s one of the few memories I have of physical pain, searing pain’.

Depp dragged Heard by the hair into a neighboring apartment, leaving chunks lying all over the floor, she said.

He got on top of her with her face in a pillow and was repeatedly beating her.

Heard said: ‘He’s trying to hold me with his knee on my back and he’s punching me with a closed fist repeatedly.

‘I could hear myself scream until I couldn’t hear myself any more I could just hear him say he was going to kill me and he sounded like an animal in pain when he was saying he f**king hated me. 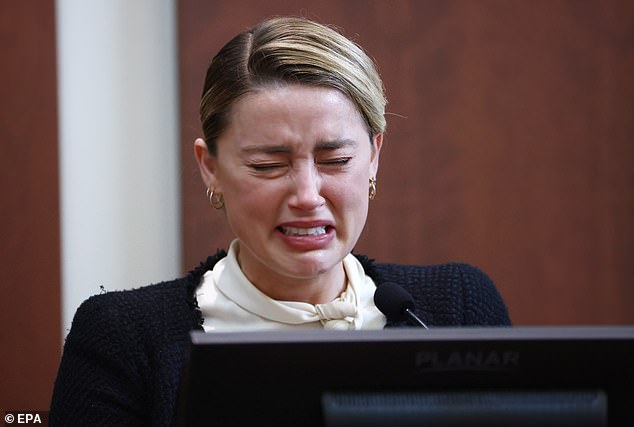 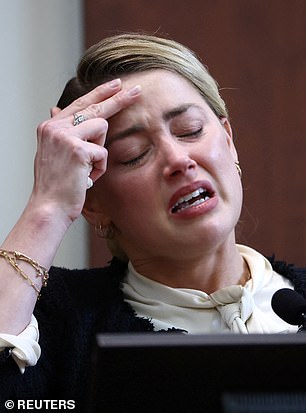 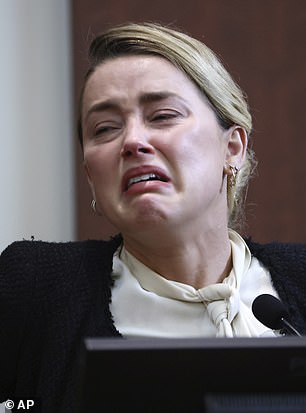 ‘I couldn’t breathe. I remember trying to scream and I couldn’t scream suffocating in this pillow top with him holding me down punching me. I don’t have any memory after that until I woke up.’

Heard also broke down on an emotional day on the stand as she detailed how Depp sexually assaulted her with a liquor bottle during emotional testimony that the actor’s defense team labeled the ‘performance of her life.’

The alleged assault took place in March 2015 in Australia at their rented home he was living in while filming Pirates of the Caribbean 5.

This is the same incident that saw Depp’s finger severed. He claimed Heard threw a liquor bottle which severed it. Heard testified that she did not witness Depp’s fingertip being cut off.

‘At some point he’s on top of me, screaming I f**king hate you, you ruined my f**king life,’ Heard testified as she sobbed uncontrollably. ‘I’m on the countertop, he had me by the neck and was on top of me. 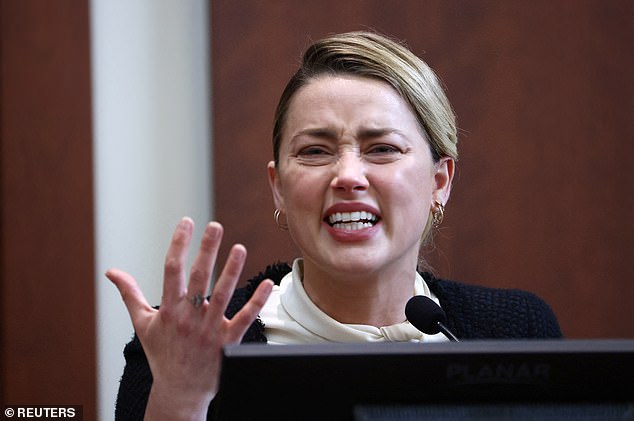 ‘At some point he’s on top of me, screaming I f**king hate you, you ruined my f**king life,’ Heard testified as she sobbed uncontrollably. ‘I’m on the countertop, he had me by the neck and was on top of me’

‘I saw so much broken glass I didn’t know if he would know if it was broken or not and I remember thinking please go I hope it’s not broken. I don’t know how that ended. I don’t know how I got off the countertop.

Depp’s team claimed the actress’ tales of abuse have evolved with ‘new and convenient details’ and plan on exposing her lies on cross-examination.