Johnny Depp’s yet-to-be-released motion picture City of Lies is at the center of a $10 million breach of contract lawsuit between its distributor and the Israel-based Bank Leumi, in the wake of its release being pulled back.

The distributor, Global Road, was named along with the Miramax label by Bank Leumi, according to Page Six, in a suit filed in a federal court in California earlier this week.

Miramax, which owns the TV distribution rights to the film, told Bank Leumi that no payment was due as result of ‘significant problems with the production’ that ‘have significantly devalued’ the motion picture, the bank said in court docs.

Headed to court: Johnny Depp ‘s yet-to-be-released motion picture City of Lies is at the center of a $10 million breach of contract lawsuit between its distributor and the Israel-based Bank Leumi in the wake of its release being pulled back

One of those factors was Depp’s ‘highly publicized alleged off-screen conduct’ in addition to a ‘a lawsuit filed against Mr. Depp and the production because he allegedly physically attacked a crew member on the set.’

Bank Leumi told the court ‘the real reason’ the film was pulled was because Global Road is ‘in financial distress and decided not to pay’ in excess of $10 million toward ‘marketing and distribution expenses’ that were assured in previous pacts.

Global Road Entertainment earlier this week laid off about 45 people in its film division, according to The Hollywood Reporter, after it was overtaken by its bank lenders.

Earlier this month, the movie’s September 7 release was pulled back. It was not immediately clear when the Brad Furman-directed film would be released. 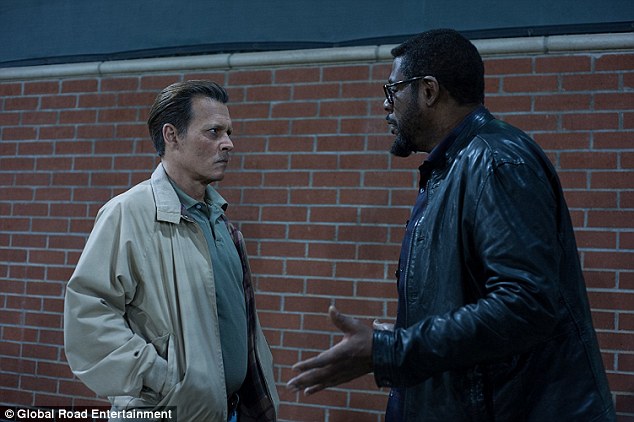 The Hollywood veteran last month was at a receiving end of the aforementioned suit over his alleged actions on the set of the movie, as location manager Gregg ‘Rocky’ Brooks claimed in his suit that the Edward Scissorhands actor struck him on multiple occasions amid a dispute during filming, TMZ reported.

Brooks said that during production the evening of April 13, 2017, he told Depp and Furman they needed to wrap things up based on their schedule. He said a boozy Depp hit him two times in his ribs, then told him, ‘I will give you $100,000 to punch me in the face right now,’ before the star’s guards guided him away.

In the movie, which examines the aftermath of law enforcement examining The Notorious B.I.G.’s March 1997 murder in the wake of Tupac Shakur’s October 1996 killing, Depp, 55, plays Det. Russell Poole.

The enigmatic actor’s has had a difficult summer, including a Rolling Stone story that called his lifestyle and finances into question; residual fallout from domestic violence allegations made by his ex-wife Amber Heard. Depp, who denied the allegations of physical abuse against Heard, issued a statement saying that ‘there was never any intent of physical or emotional harm’ in the marriage upon agreeing on a settlement two years ago.