It will retain a 30 per cent stake in the division which creates specialist pharmaceutical ingredients for pharma and biotechnology customers, and was the subject of a strategic review begun in April by the group.

This review concluded that the health unit was not a core element of the company, so the London-listed multinational considered offloading it and returning some of the proceeds to shareholders.

Control: Johnson Matthey will retain a 30 per cent stake in the health division, which creates complex and specialist pharmaceutical ingredients for pharma and biotechnology customers

Health contributed sales of over £230million and an underlying operating profit of £31million in the year ending March 2021, but in the six months afterwards, it made a loss of £4million on sales of £83million.

Johnson Matthey expects to receive £150million once it completes the sale, an additional £50million dependent should it hit specific performance targets in 2023 and 2024, and another £50million in the form of a vendor loan note.

Bosses said New York-based Altaris was a suitable buyer due to its record of expanding companies within the healthcare industry since being set up 18 years ago.

The manufacturer is well-known for producing catalytic converters that help to filter harmful emissions from petrol and diesel vehicles. One-third of all cars in global use are estimated to contain the company’s converters.

He added: ‘While health has good long-term prospects, near term trading has been challenging, and the business requires significant capital investment. 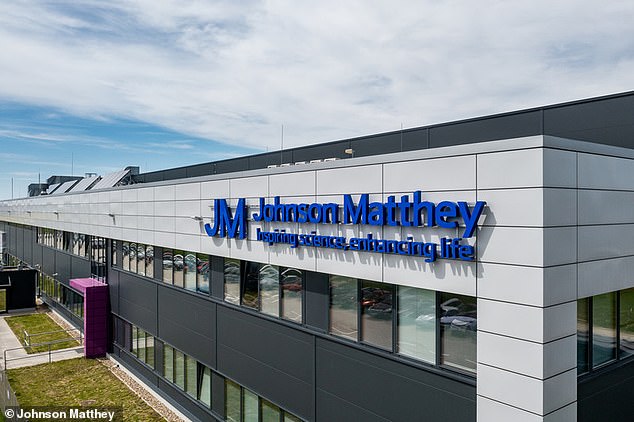 Hard times: Johnson Matthey’s announcement comes during a difficult time for the group, which is set to be relegated from the blue-chip FTSE 100 Index on Monday next week

‘Health operates in different markets from the rest of JM, and we believe Altaris is the best partner to drive its future value.’

Johnson Matthey’s announcement comes during a difficult period for the group, which is set to be relegated from the blue-chip FTSE 100 Index on Monday next week along with newly-listed cybersecurity giant Darktrace.

Its value took a knock last month when it decided it would shut down its electric car battery programme due to competitors in China and South Korea having far more advanced technology.

Commenting on the sales of the health business, Matt Britzman, an equity analyst at Hargreaves Lansdown, said: ‘Having recently exited the battery scene in surprising fashion, this news compounds the strategy to strip back to basics.

‘The good news is that the core business is actually very profitable and catalytic converters, where it makes money, won’t disappear overnight. But the new electric world is gathering pace, and the clock’s ticking to find new growth opportunities.

‘A new CEO at the helm, with a cash hoard at his disposal, means the group can pounce on new opportunities. But as JMAT’s proven already, it’s not easy to embark on a new business and for the moment at least, the group looks out of ideas.’