Dramatic video emerged on Wednesday showing Jon Stewart break down in tears after 9/11 first responders honored him with a jacket worn by a New York firefighter who died of cancer after responding to the terrorist attack.

Before making a moving appearance before the House Judiciary Committee on Tuesday, Stewart burst into tears after he was gifted the turnout coat worn by Ray Pfeifer just outside the chamber.

Pfeifer, who served more than 27 years with the FDNY, worked for months to aid the recovery effort at Ground Zero after the collapse of the World Trade Center on September 11, 2001. 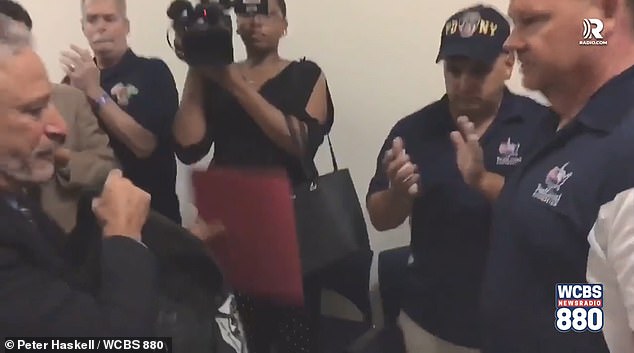 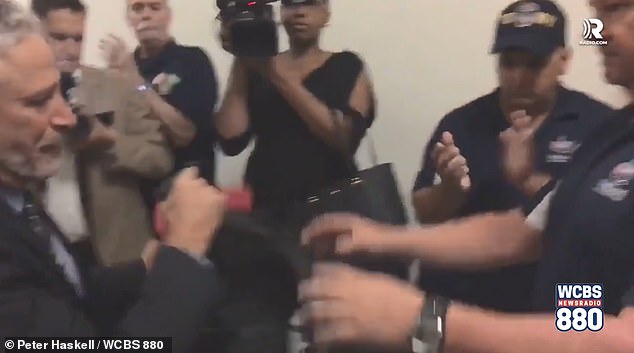 Using a wheelchair to get around, Pfeifer made repeated trips to Capitol Hill to lobby federal lawmakers to pass 9/11 health and compensation bills.

Stewart, who befriended Pfeifer, eulogized him during his funeral.

The two men met in 2015, which was the last time that 9/11 legislation was expiring.

As host of The Daily Show on Comedy Central, Stewart often used his platform to lobby Congress to pass legislation helping the firefighters.

Pfeifer’s coat, which he wore as a member of the East Meadow Fire Department on Long Island, was won at auction by John Feal, a supporter of causes that benefit 9/11 first responders. 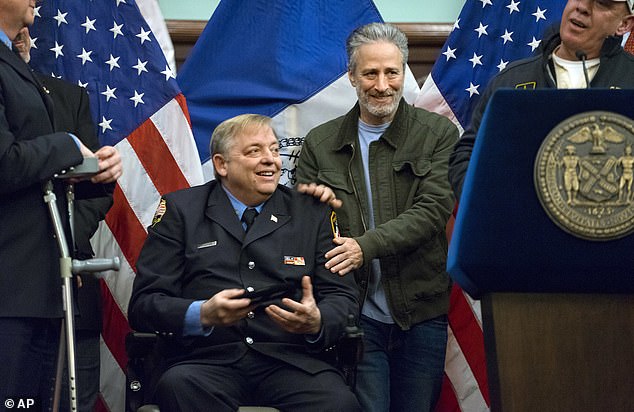 Stewart and Pfeifer (seen in January 2016) became friends. They teamed up to lobby Congress to pass legislation extending coverage to first responders who developed illnesses linked to the toxins at Ground Zero after the collapse of the Twin Towers on September 11, 2001 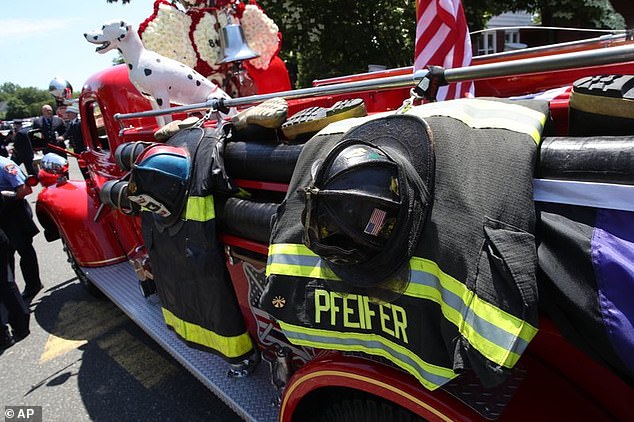 Pfeifer was diagnosed with cancer in 2009. He died two years ago. His turnout coat and helmet are seen above on a fire truck during his funeral on Long Island in June 2017

Kenny Specht, a retired firefighter and friend, gave a speech in the hallway saying that Feal bought the jacket, outbidding three others in auction, with the intent of giving it to Stewart.

‘I believe everyone here in this hallway have learned brotherhood and camaraderie because we all have one mission,’ Specht said. 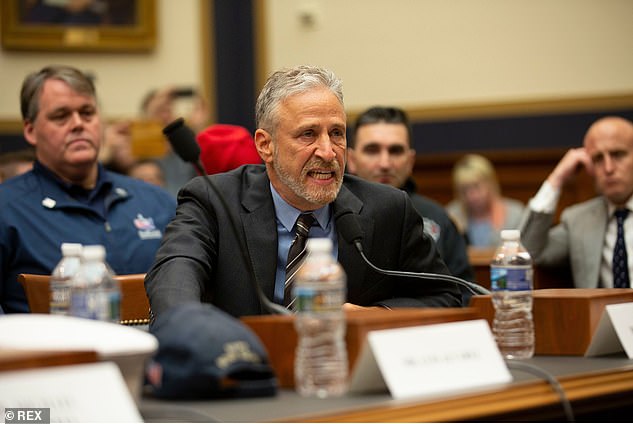 Stewart, a longtime advocate for 9/11 responders, called out lawmakers on Tuesday for failing to attend a hearing on a bill to ensure the fund can pay benefits for the next 70 years 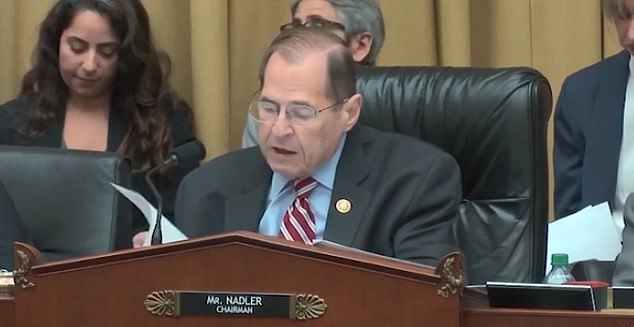 ‘It’s time for us to give responders and survivors peace of mind once and for all and pass this long-term reauthorization to make sure the VCF will be there for them as long as they need it,’ Judiciary Committee Chairman Jerrold Nadler said (Nadler is pictured)

‘But I will treasure it, like I treasured Ray and our friendship. And all of you.

‘And we’re going to do it today. Not just for Ray. But for all you guys and the people he was fighting for.’

‘It’s beautiful,’ Stewart said of the jacket. ‘Thank you.’

A day after Stewart gave an impassioned speech which shamed lawmakers for delaying passage of extended coverage for first responders, a bill that will permanently ensure funding for the victims of 9/11 passed out of the House Judiciary Committee unanimously on Wednesday.

The House committee voted to advance the ‘Never Forget The Heroes Act,’ which would grant additional funding to the rapidly dwindling 9/11 Victim Compensation Fund beyond 2020. The bill will now move to the full House for a vote next month.

The fund covers medical costs of first responders, volunteers and survivors suffering from 9/11-related illnesses, including respiratory or digestive-system ailments and even cancers. 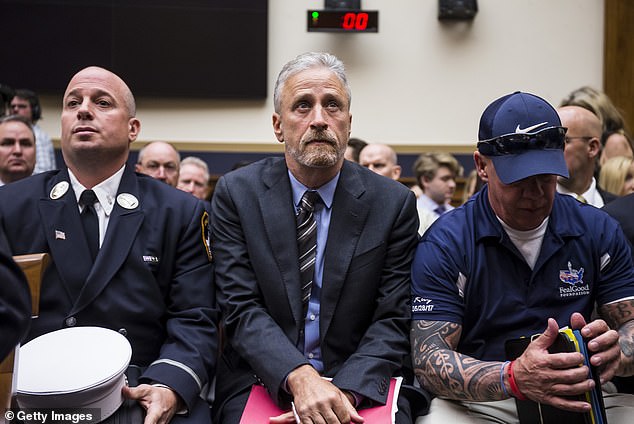 Fighting back tears, the former Daily Show host said Tuesday: ‘A filled room of 9/11 first responders and in front of me a nearly empty congress 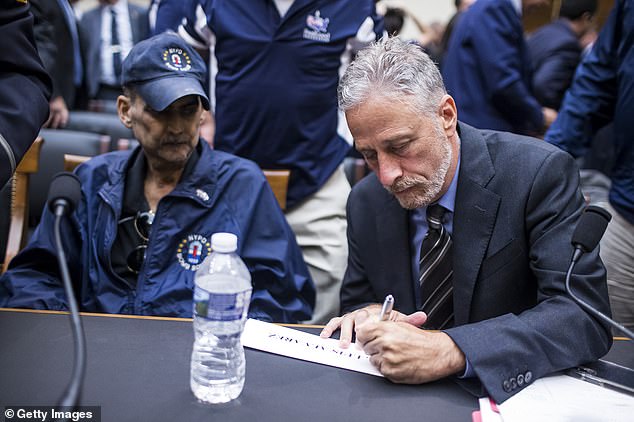 ‘It’s time for us to give responders and survivors peace of mind once and for all and pass this long-term reauthorization to make sure the VCF will be there for them as long as they need it,’ Judiciary Committee Chairman Jerrold Nadler said.

‘We are going to make the VCF permanent because there is no other choice. We have a double moral obligation to our 9/11 first responders, survivors, and their families,’ he added.

Rep. Carolyn Maloney added: ‘First, to those who ran to save lives, putting others ahead of themselves. They were selflessly there for us – we now must be there for them.

‘Secondly, to all those our government told it was safe to breathe the air, drink the water – go back to work and school when it wasn’t. We lied to them, and now we need to do everything we can to be there for them and make their suffering less,’ she added.

On Tuesday, Stewart lashed out at Congress for failing to ensure that a fund set up after the terrorist attacks never runs out of money, with just five members out of 14 turning up to hear the victim’s emotional appeal for more support. 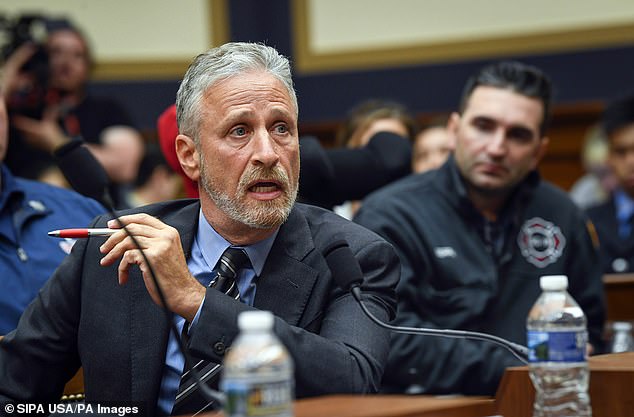 Stewart lashed out at Congress on Tuesday for failing to ensure that a victims’ compensation fund set up after the 9/11 attacks never runs out of money. Stewart, a longtime advocate for 9/11 responders, called out lawmakers for failing to attend a hearing on a bill to ensure the fund can pay benefits for the next 70 years 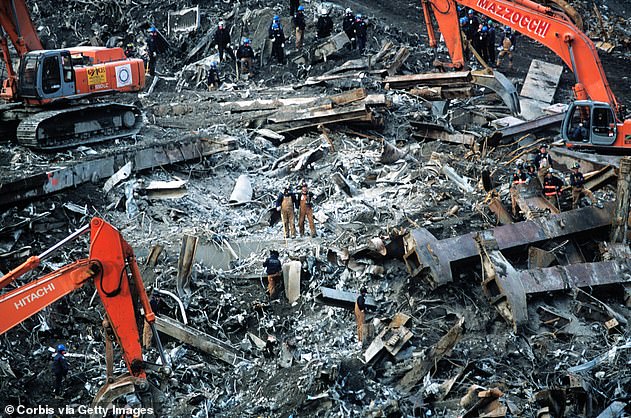 Only Nadler and four subcommittee members were present for testimony from 9/11 first responders, including by a cancer stricken former NYPD officer on his 69th round of chemotherapy.

Legislation had set aside $7.3billion dollars to compensate the victims of the 9/11 attacks and their families, including those killed and first responders.

But $5billion has already been paid out, and families and their advocates say at least another $5billion is needed to cover pending claims.

The bill keeps the current fund going until October 1, 2090. Previous bills only allowed victims of the terror attacks – including the first responders – to file claims in five-year periods.

Healthcare coverage for many first responders is covered by the Zadroga Act, which was passed in 2011.

On December 18, 2015, the act was extended to allow medical benefits to those affected until 2090.

The act authorizes health monitoring and financial aid for medical treatment for first responders and survivors of the attacks such as firefighters, NYPD and EMS workers.

However, with more than 28,000 claims to date, the funds will fall short and more is required to meet the needs of medical claimants.

The act is named after NYPD Det. James Zadroga, who spent weeks working in the rubble of the World Trade Center.

However, the new bill also doesn’t cap the funds allocated to assist the victims.

‘That 5-year reauthorization was not nearly enough. People are still getting sick as diseases like cancer emerge after long latency periods.

‘Those already sick are getting sicker, and tragically many are dying and have died,’ Nadler said in his opening statement Wednesday.

The bill, which was sponsored by Maloney, will now need to be scored by the Congressional Budget Office before it can get a full vote in the House, but is expected to pass, as the legislation has 313 bipartisan co-sponsors.

The Zadroga Act pledged in 2015 to extend medical coverage until 2090 but now thanks to a rapidly dwindling kitty will fall short, which prompted Stewart and a host of victims’ families to appeal for greater funding.

Pointing to rows of empty seats at a house subcommittee hearing room, an angry Stewart, 56, said that ‘sick and dying’ first responders and their families came to Washington for the hearing, only to face a nearly deserted dais.

Fighting back tears, the former Daily Show host said: ‘A filled room of 9/11 first responders and in front of me a nearly empty congress. Sick and dying, they brought themselves down here to speak to no one. Shameful. It’s an embarrassment to the country and it is a stain on this institution.’ 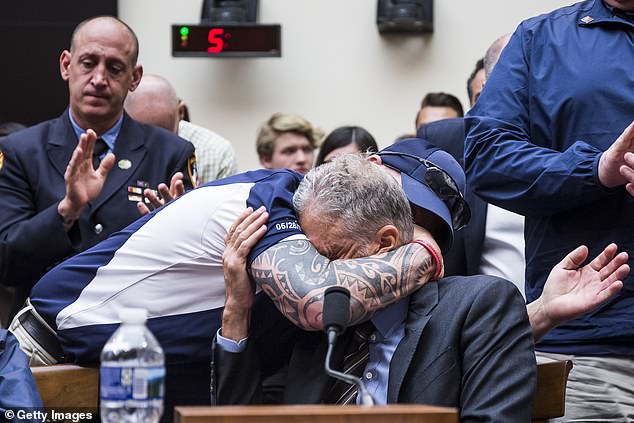 In his emotional speech, Stewart said that families want to know ‘why is this so damn hard and takes so damn long?’ 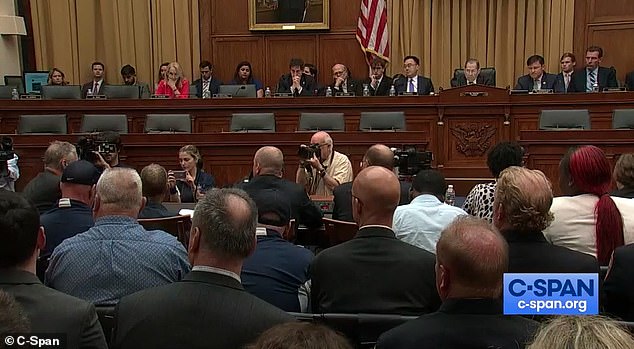 Pointing to rows of empty seats at a subcommittee hearing room, an angry Stewart, 56, said ‘sick and dying’ first responders and their families came to Washington for the hearing, only to face a nearly deserted dais

The damning and at times heartbreaking speech earned Stewart a standing ovation from the first responders around him.

In front of Stewart was ​House ​Judiciary Committee Chairman Jerrold Nadler​ of New York, along with ​Democratic Reps. Steve Cohen​ of Tennessee​, Mary Gay Scanlon​ of Pennsylvania​, Jamie Raskin ​of Maryland ​and the top Republican in the ​Judiciary subcommittee, Rep. Mike Johnson ​of Louisiana.

In his emotional speech, Stewart said that families want to know ‘why is this so damn hard and takes so damn long?’.

And he pointed out that the official recorded response time of FDNY firefighters on the day of the attacks was just five second.

‘A filled room of 9/11 first responders and in front of me a nearly empty congress. Sick and dying, they brought themselves down here to speak to no one. Shameful. it’s an embarrassment to the country and it is a stain on this institution.

‘And you should be ashamed of yourselves for those that aren’t here. But you won’t be. Because accountability doesn’t appear to be something that occurs in this chamber.’

‘They’re not here for themselves. They are here to continue fighting for what’s right. Lu’s going to go back for his 69th chemo, the great Ray Pfeifer would come down here, his body riddled with cancer and pain, where he couldn’t walk. And the disrespect shown to him and the other lobbyists on this bill is utterly unacceptable.’

‘There is not an empty chair on that stage that didn’t tweet out: ‘Never forget the heroes of 9/11. Never forget their bravery.’ Well here they are.’

‘Your indifference cost these men and women their most valuable commodity: time. The one thing they’re running out of.’

‘I’m tired of hearing it’s a 9/11, New York issue. Al Qaeda didn’t shout, ‘Death to Tribeca!’ They attacked America, and these men and women, and their response to it, is what brought our country back.’

Gesturing to rows of uniformed firefighters and police officers behind him, he said the hearing ‘should be flipped,’ so that first responders were on the dais, with members of Congress ‘down here’ in witness chairs answering their questions.

The collapse of the World Trade Center in September 2001 sent a cloud of thick dust billowing over Lower Manhattan.

Thousands of construction workers, police officers, firefighters and others spent time working in the soot, often without proper respiratory protection.

In the years since, many have seen their health decline, some with respiratory or digestive-system ailments that appeared almost immediately.

Others have developed illnesses later caused by the toxic dust on the site, including cancer.

One such case is that of cancer stricken Luis Alvarez, who spent time searching roof tops for victims soon after the towers fell, and is currently on his 69th round of chemo.

The trip to Washington interrupted his medical treatment but he said:  ‘I want my kids to know that dad did everything he could to help other police officers get though this.’

‘This fund isn’t a ticket to paradise, it’s to provide our families with care,’ said Alvarez.

‘You all said you would never forget. Well, I’m here to make sure that you don’t,’ Alvarez said to a room of loud applause.

More than 40,000 people have applied to the September 11th Victim Compensation Fund, which covers illnesses potentially related to being at the World Trade Center site, the Pentagon or Shanksville, Pennsylvania, after the attacks.

Stewart and other speakers lamented the fact that nearly 18 years after the attacks, first responders and their families still have no assurance the fund will not run out of money. 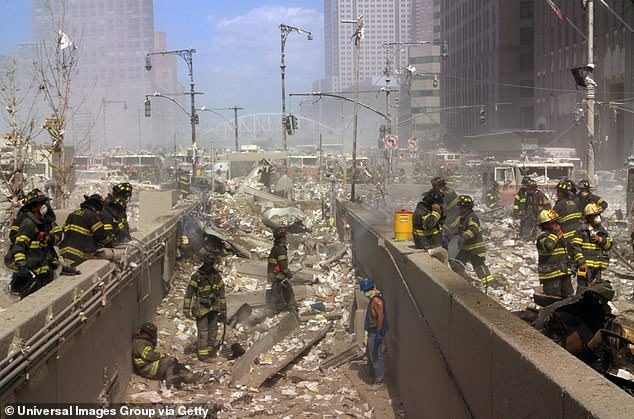 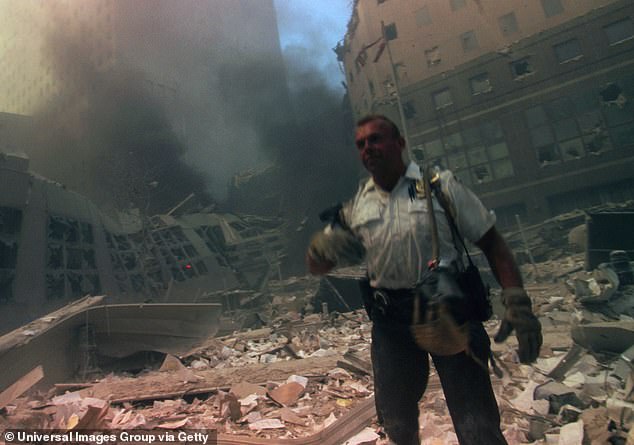