A ‘heinous’ paedophile put up a vile ad on a classifieds website seeking a mother willing to sell her young daughter for sex before being busted by police.

Jonathon David Henke, 46, was arrested in an Adelaide motel room in October 2020 while waiting to rape an eight-year-old girl.

After placing an ad online ‘looking for mother and very young daughter’, he had arranged to meet the pair at the venue, bringing with him flavoured condoms, lubricant, and child exploitation material.

But instead, police who had been posing as the mother barged through the door, cuffing him as he sat on the bed.

The sickening message exchange and details about Henke’s broken-down marriage to a sex worker leading up to the crime, were revealed after the predator was sentenced last month.

Jonathon David Henke (pictured) was waiting for the arrival of what he thought was a mother bringing her eight-year-old daughter to have sex with him. Instead, police came through the door and arrested him

The South Australian District Court heard that on October 2, 2020 Henke posted an online advertisement on a site called ChaosAds.

The ad said it was from a ‘male looking for mother and very young daughter’, Judge Adam Kimber said during sentencing.

‘It went on to say: ”Hi, I am looking for a mother and daughter to have some fun with. I am very open-minded. I can travel and host and reward.’

‘You provided your mobile phone number and the name ”Jack”.’

Police saw the ad and contacted Henke on the phone number he gave.

‘The undercover officer pretended to be a 37-year-old mother of two young girls, aged five and eight,’ Judge Kimber said.

Henke sent a series of vile messages about the eight-year-old and offered $500 to have sex with her. 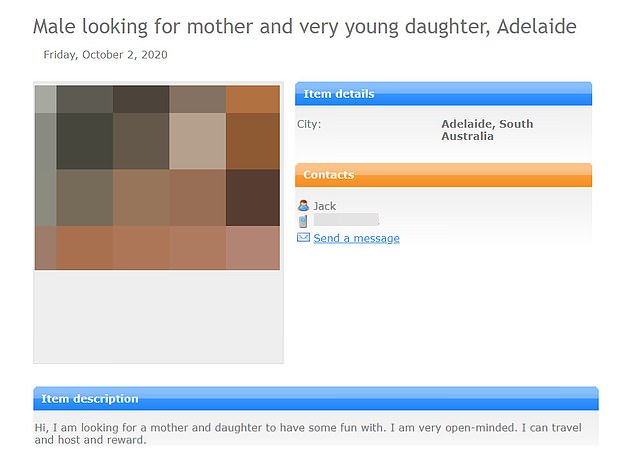 The South Australian District Court heard that on October 2, 2020 Henke posted an online advertisement on a site called ChaosAds

‘You asked about the child’s sexual experience … and asked whether the child had been shown the photograph you had sent of your penis,’ Judge Kimber said.

Henke booked a motel room where he could have sex with the child and asked the person he thought was the mother to bring child exploitation material.

The judge said ‘The condoms were flavoured and in the flavour you had been told the child liked.’

The former truck driver posted the online ad on the same day his wife asked for a divorce.

Judge Kimber noted Henke had ‘limited experience of sexual intimacy’ and his estranged wife was his ‘first ever partner’.

‘She was a sex worker, and you a client,’ he said.

‘You commenced a relationship with her in late 2018, and married in December 2019. Despite being married, you never lived together.

‘From the history you have given, it is difficult to escape the conclusion that she was using you. Nonetheless, you loved her and were devastated when she asked for a divorce.’ 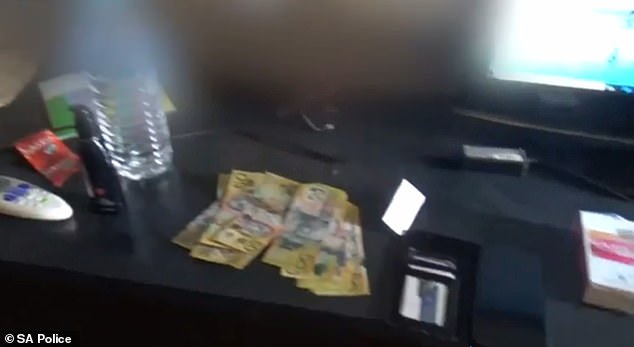 Henke had stacks of $50 notes (pictured) on a desk, ready to pay for sex with am eight-year-old child

Footage of the arrest released by the Adelaide District Court this week shows officers entering the room to find Henke sitting on one of the beds.

The officers then handcuffed Henke while saying: ‘Let go of your hand, let go your arm.’

Officers found stacks of $50 notes heaped on a desk in the room, which Henke thought he was going to use to pay to have sex with the child.

A pack of flavoured condoms was also seen on the desk and Henke also had lubricant with him.

In the footage, one of the police officers says ‘Mr Henke, is it?’ and two officers lift him onto the bed.

One of the officers introduces himself as being from the Child Exploitation team and tells Henke he is placing him under arrest.

Henke is then read his rights and asked if he understands. He says he does and is then told that ‘the camera is running. Anything you say is being recorded.’

When he was caught, pathetic Henke tried to lie to police that he was actually just trying to help them out.

Henke (pictured), a former truck driver, posted the online ad on the same day his wife asked for a divorce. He’s seen being arrested by cops, in police vision above

Henke, from Nuriootpa, an hour north of Adelaide, was also found with child exploitation material.

Judge Kimber said Henke’s offending was ‘heinous’ and his ‘deviant’ interest in children meant his chances of reoffending were ‘very real’.

‘You believed that you were contracting for a child to be sold for sex,’ he said.

‘You have only recently admitted having had a deviant sexual interest in prepubescent and pubescent females for about 15 years.

‘You have also admitted having viewed child exploitation material over at least the last 15 years,’ the judge said.

He was sentenced to five years and eight months jail, with a non-parole period of three years and six months.

The sentence was backdated to October 23, 2020, the day he was arrested.