REVEALED: Jordan Pickford repeated his water bottle trick from the 2018 World Cup with notes about Italy’s penalty takers before the Euro 2020 final shoot-out… and it almost worked with England stopper saving two penalties at Wembley

By Jack Bezants and Kevin Quigley For Mailonline

England goalkeeper Jordan Pickford repeated his trick of having notes about Italy’s penalty takers taped to his water bottle in the final of Euro 2020 at Wembley.

The Everton No 1 famously had details on his drinks bottle about Colombia’s penalty takers in the 2018 World Cup second-round penalty win, a result that snapped England’s dreaded shoot-out curse.

And it almost worked again on Sunday but despite saving two of Italy’s penalties Pickford was on the losing side. 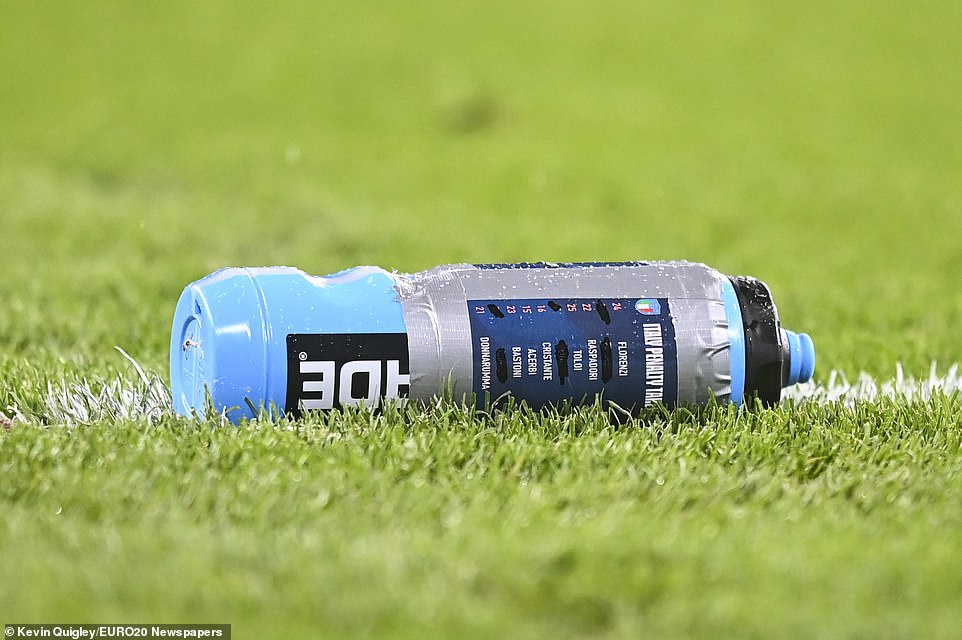 From one side, the notes show details about players who actually didn’t end up taking a penalty for Italy 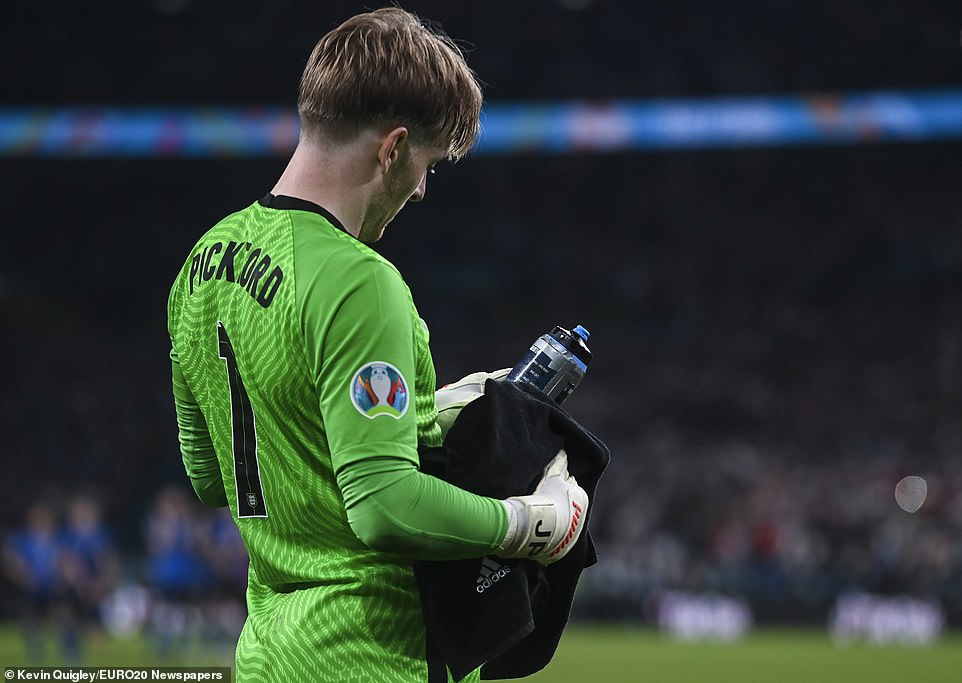 Sportsmail pictured Pickford checking the bottle before the penalties at Wembley although from the angle of the images, none of the players listed on Pickford’s notes took a spot-kick.

Pickford dived low to his left to deny Belotti, before correctly going to his bottom right to deny Jorginho – who is so often ruthless from the spot for Chelsea.

But sadly for England, Marcus Rashford, Jadon Sancho and Bukayo Saka were unable to convert their efforts and England were defeated 3-2.

Remarkably, it appears Pickford was also down to take England’s sixth penalty. Footage emerged on Monday showing Southgate going round his team and briefing his players on which spot-kick they were going to take.

And after speaking to Rashford, Sancho and Saka, Southgate then approached Pickford followed by Kalvin Phillips. Pickford took a penalty in England’s Nations League shoot-out win over Switzerland in 2019 and scored. 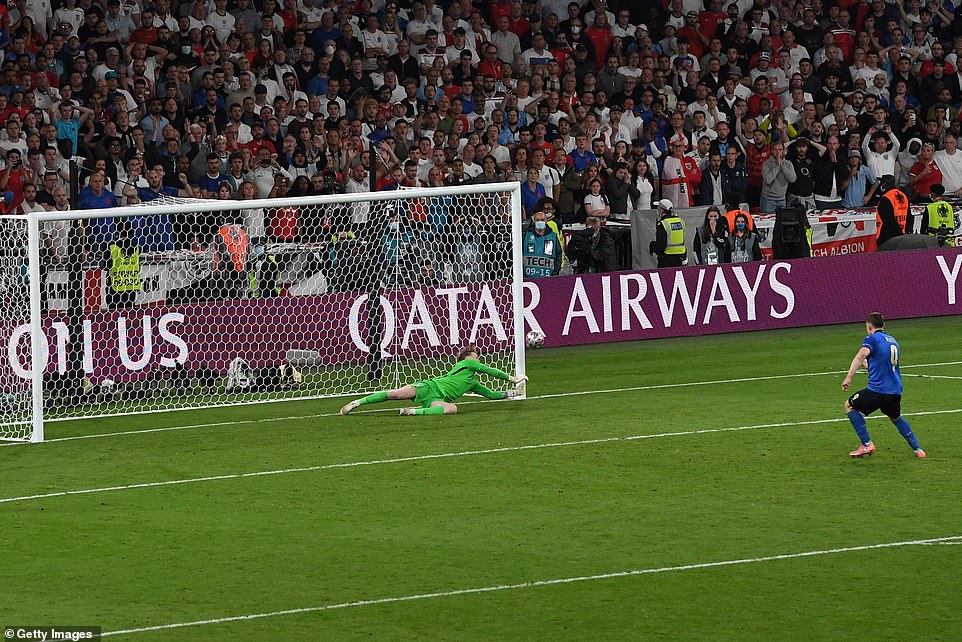 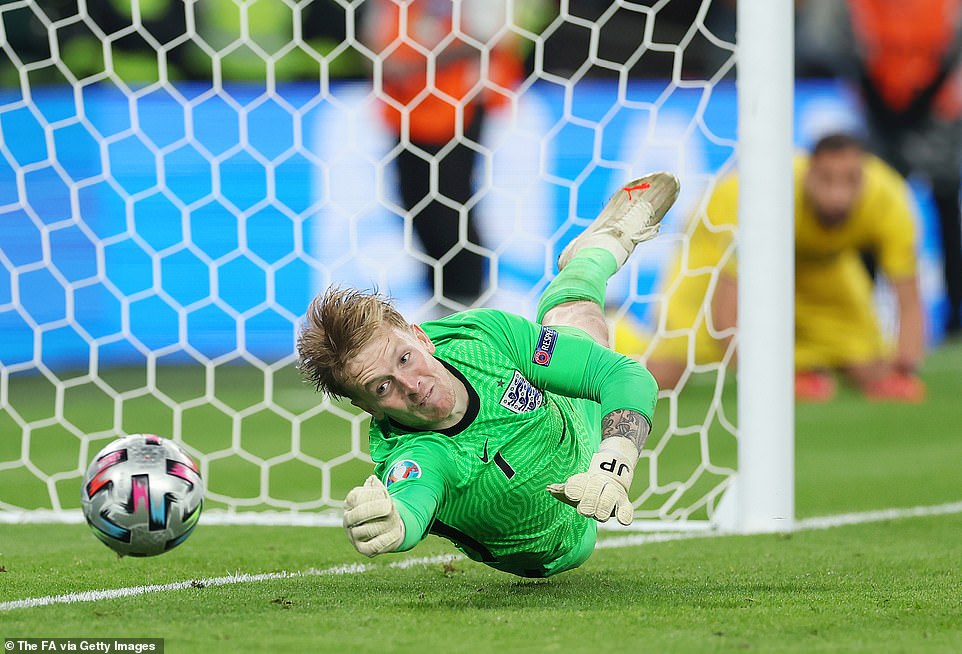 Back in the 2018 World Cup, Pickford made a superb save from Carlos Bacca to help England progress into the last eight of the tournament. He appeared to have notes on his bottle then, although wrapped it up in a towel so it was harder to spot.

Pickford later said of his save: ‘Well, I know the whole country wanted me to save it, so hopefully I put some happy faces on people on their way to work.

‘I did a bit of research and we knew Bacca was maybe a weak link on the penalties because we had watched previous ones.’

England have had a meticulous preparation for penalty shoot-outs under Southgate’s leadership and have ended every training session since last September with penalty kicks. 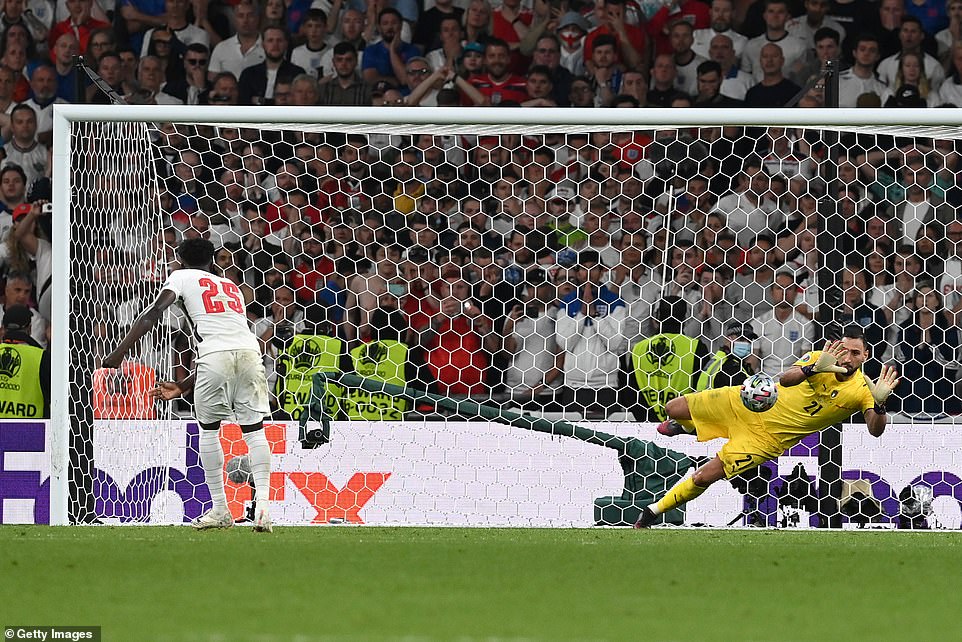 Unfortunately for England, they could not take advantage of Pickford’s efforts with Bukayo Saka (pictured) missing along with Jadon Sancho and Marcus Rashford

Assistant coach Steve Holland kept a record of all their efforts, creating a league table of penalty-takers and that informed Southgate’s thinking over the line-up of takers he chose for the shoot-out with Italy.

Sportsmail reported on Monday that England’s players were shocked by Southgate’s decision to give Saka the responsibility of taking the decisive fifth penalty.

Saka, 19, was only considered a borderline candidate to make Southgate’s squad on the eve the tournament, yet was chosen to take a penalty ahead of more experienced players such as Raheem Sterling and Jack Grealish because of his outstanding conversion rate in training sessions.

But the Arsenal man had never taken a penalty at senior level before and his appearance in the final was just his ninth England cap.