SHARHABIL, Jordan (AP) – From a hillside in northern Jordan, the Yarmouk River is barely visible in the steep valley below, reduced from a once important water source to a sluggish trickle overgrown with vegetation. Jordan’s reservoirs are only one-fifth full, a record low, and vital winter rains are becoming more erratic.

Jordanians don’t need scientists to tell them that they live in one of the world’s driest countries in the center of the planet’s most water-poor region.

But recent studies suggest the kingdom, a Western ally and refugee host nation with a growing population, is being hit particularly hard by climate change, getting hotter and drier than previously anticipated. One forecast predicts as much as 30 percent less rain by 2100.

This Oct. 23, 2017 photo shows a stretch of the King Abdullah Canal, the largest irrigation system near the town of Northern Shouneh, Jordan. Recent studies say the kingdom, a Western ally and refugee host nation with a growing population, is being hit particularly hard by climate change, getting hotter and drier than previously anticipated. (AP Photo/Omar Akour)

“We are really in trouble if we don’t take action in time,” said Ali Subah, a senior Water Ministry official.

But addressing the problem would require cross-border cooperation, a commodity as scarce as water in the Jordan River basin shared by Jordan, Israel, the Palestinians, Syria and Lebanon.

Jordan’s flagship Red Sea desalination project, which includes a water trade with Israel, has faced repeated delays, most recently because of a diplomatic crisis that led to a scaling back of cross-border contacts since the summer.

A master plan by the regional advocacy group EcoPeace that seeks to transform the Jordan River valley into an economically vibrant green oasis by 2050 is based, in part, on a state of Palestine being established on Israeli-occupied lands. Palestinian independence remains distant, and Israeli Prime Minister Benjamin Netanyahu recently asserted that Israel will never leave the stretch of the Jordan Valley in the occupied West Bank.

Warning signs abound of what a failure to act looks like.

The Dead Sea and Jordan River, global treasures with religious significance as the cradle of Christianity, have been devastated by dropping water levels due to decades of water diversion to urban areas. Some experts suggest civil war in neighboring Syria, which led to a large influx of refugees to Jordan and other neighboring countries, may have been triggered in part and indirectly by a mismanaged drought.

“People need to be aware of their water situation, and try to compromise between their water reality and their nationalistic politics,” he said at his group’s lush, formerly arid 270-hectare (675-acre) reserve in the Jordan Valley, a witness to nature’s power to bounce back.

Stanford University researchers say that in the absence of international climate policy action, the kingdom would have 30 percent less rainfall by 2100. Annual average temperatures would increase by 4.5 degrees Celsius (8.1 degrees Fahrenheit) and the number and duration of droughts would double, compared to the 1981-2010 period.

Water flows to Jordan from the Yarmouk River, which originates in Syria, would remain low due to droughts and diversion, regardless of when the civil war ends.

The results, published in the journal Science Advances and based on improved data analysis tools, suggest the impact of climate change is likely to be more severe than anticipated, said Steven Gorelick, head of the university’s internationally supported Jordan Water Project.

Another study found that man-made climate change was a major force behind an extreme drought in the area in early 2014, said co-author Rachael McDonnell of the International Center for Biosaline Agriculture in Dubai.

“The findings are more severe than anticipated and more imminent,” she said.

The World Bank named Jordan, Iraq, Lebanon, Morocco and Syria as the countries in the Middle East and North Africa that will experience significantly increased water stress driven by climate change. The bank’s report in August described the region as the “global hotspot of unsustainable water use.”

Israel is on the road to resolving its water scarcity, producing close to 75 percent of water for domestic use in desalination plants and recycling more than half of its waste water for agricultural use, said Yacov Tsur, a professor of environmental economics at the Hebrew University of Jerusalem.

Israel is being aided by technological advances, easy access to sea water and a strong economy that can afford large-scale projects, he said.

Jordan, which pulls 160 percent more water from the ground than nature puts in, views desalination as the main answer.

A Jordan-only option would be costly. Jordan’s main population center is about 300 kilometers (190 miles) from the only coastline, making it prohibitively expensive to deliver desalinated Red Sea water to the capital, Amman.

In recent years, a water trade plan was developed to get around high transport costs.

Jordan would desalinate Red Sea water, sell some to nearby southern Israel and pump the brine into the Dead Sea to raise water levels there. Separately, water from northern Israel would be sold to nearby northern Jordan and to Palestinian communities.

Israel has a strategic interest in the stability of security ally Jordan, a land buffer against the region’s turmoil.

But the Red Sea-Dead Sea project has hit snags, in part over funding, and Jordan still hasn’t approached five short-listed consortiums to submit their bids.

The ongoing diplomatic crisis, triggered by the fatal shooting of two Jordanians by an Israeli Embassy guard in Amman in July, also contributed to delays by reducing cross-border contacts, said Subah, the Water Ministry official.

He said Jordan remains committed to the regional project but will also look at fallback options. “The Jordanian solution for water in the future is desalination,” he said. “If it’s regional, if it’s on our own, we will go in this direction.”

Some say the government’s focus on desalination is linked, in part, to reluctance to implement politically painful conservation measures.

For example, more than 50 percent of Jordan’s water is used for agriculture which produces only a small share of the local food supply.

Water for irrigation remains heavily subsidized, encouraging waste and the planting of water-intensive crops such as bananas and tomatoes.

About half the water supply is lost from the network, most of it due to misuse or theft.

The government has cracked down on illegal water use, announced a slight price increase and plans to ramp up waste water treatment for use in agriculture as budgets permit.

But there are fears that draconian reforms could lead to instability, said Hussam Hussein, a water expert at the American University of Beirut.

“This would not be popular at all,” he said. “That’s why, from a political perspective, it’s easier for the government to increase the supply and maintain the status quo.”

At EcoPeace, Jordanian, Israeli and Palestinian activists try not to lose hope, despite what Israeli co-director Gidon Bromberg acknowledged to be “enormous” political obstacles.

The group is floating a new swap idea, in addition to the Red-Dead project, in which Jordan would sell solar energy to Israel in exchange for water.

Separately, the group’s master plan outlines 127 projects with an investment value of $4.6 billion to help rehabilitate the Jordan River and the Dead Sea and grow the Jordan Valley’s economy almost 20-fold by 2050. The group recently identified 13 projects as doable now.

In a setback, the diplomatic crisis derailed a conference on the water-energy swap idea and a trilateral official meeting on how to move forward with the 13 projects.

He said progress will be made once all involved realize that failure to respond to the water and environmental crises poses a risk to their national security.

“Where national security interests are clarified, they trump,” he said. 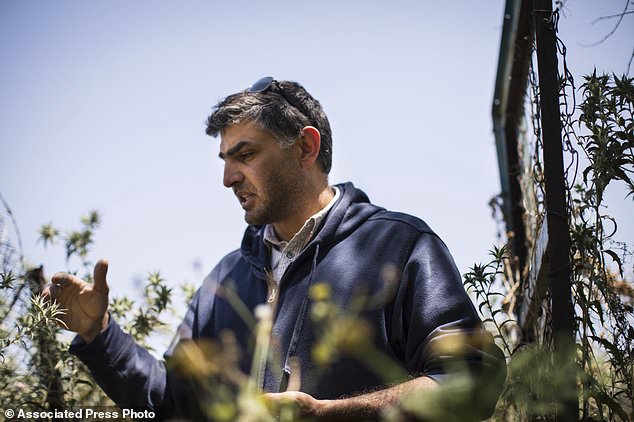 In this April 26, 2015 photo, Abdel Rahman Sultan, park director, shows different types of native plants that have flourished on the protected land at the Sharhabil bin Hassneh Eco Park, located in the northern Jordan Valley near the Jordan-Israel border. Studies suggest parched Jordan is being hit hard by climate change, getting hotter and drier than previously anticipated. Yet large-scale solutions such as a cross-border desalination project with Israel are entangled in politics. (AP Photo/Lindsey Leger) 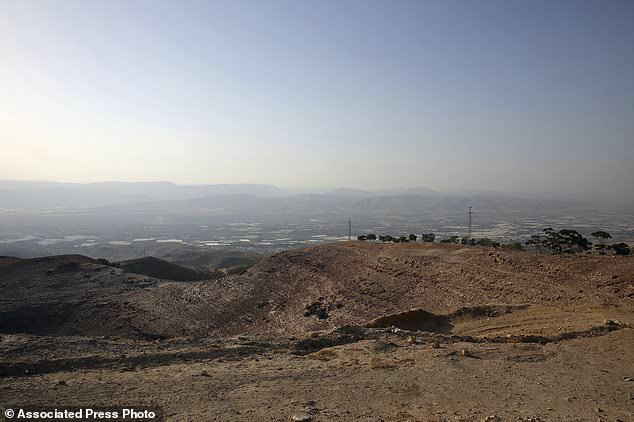 This Oct. 23, 2017 photo shows the Jordan River Valley, whose ecosystem has been badly hurt by water diversions to urban centers as seen from a hilltop in western Jordan. Recent studies say the kingdom, a Western ally and refugee host nation with a growing population, is being hit particularly hard by climate change, getting hotter and drier than previously anticipated. (AP Photo/Omar Akour) 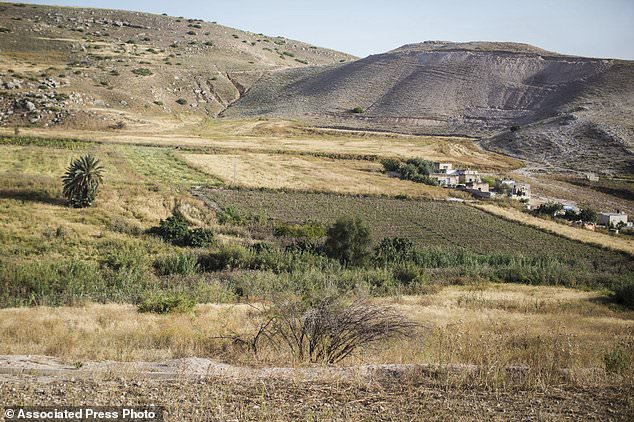 In this April 26, 2015 photo, agricultural fields and a small village can be seen from the Sharhabil bin Hassneh Eco Park, located in the northern Jordan Valley, near the Jordan-Israel border. Studies suggest parched Jordan is being hit hard by climate change, getting hotter and drier than previously anticipated. Yet large-scale solutions such as a cross-border desalination project with Israel are entangled in politics. (AP Photo/Lindsey Leger) 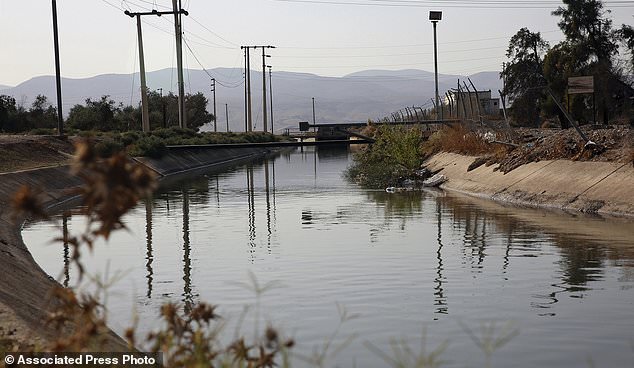 This Oct. 23, 2017 photo shows a stretch of the King Abdullah Canal, the largest irrigation system near the town of Northern Shouneh, Jordan. Recent studies say the kingdom, a Western ally and refugee host nation with a growing population, is being hit particularly hard by climate change, getting hotter and drier than previously anticipated. (AP Photo/Omar Akour)