She stunned on the red carpet for the long-awaited premiere of her Fast & Furious sequel F9 on Friday night.

But Jordana Brewster looked just as glamorous earlier in the evening when she unwinded with a drink before heading to the iconic Chinese Theatre in Hollywood.

The 41-year-old actress and model showed off her toned and tanned legs in her Versace gown as she sipped on a glass of rum.

Loosening up: Jordana Brewster, 41, relaxed with a glass of rum while wearing her stunning pink Versace dress ahead of Friday night’s F9 premiere in Hollywood

Jordana was set to have all eyes on her thanks to the lacy off-the-shoulder gown, which was covered in an intricate spiderweb-like pattern.

She leaned forward and rested her elbows on her legs while warming up with her drink in one casual shot, though she appeared to have stepped on her train with her pink platform stilettos.

The Lethal Weapon actress powdered her impeccably made-up face in another behind-the-scenes photo while she playfully sat on an old wooden desk in her home.

She highlighted the dress’ striking triangle-shaped cut-out just below her bust that showcased her flat midriff. 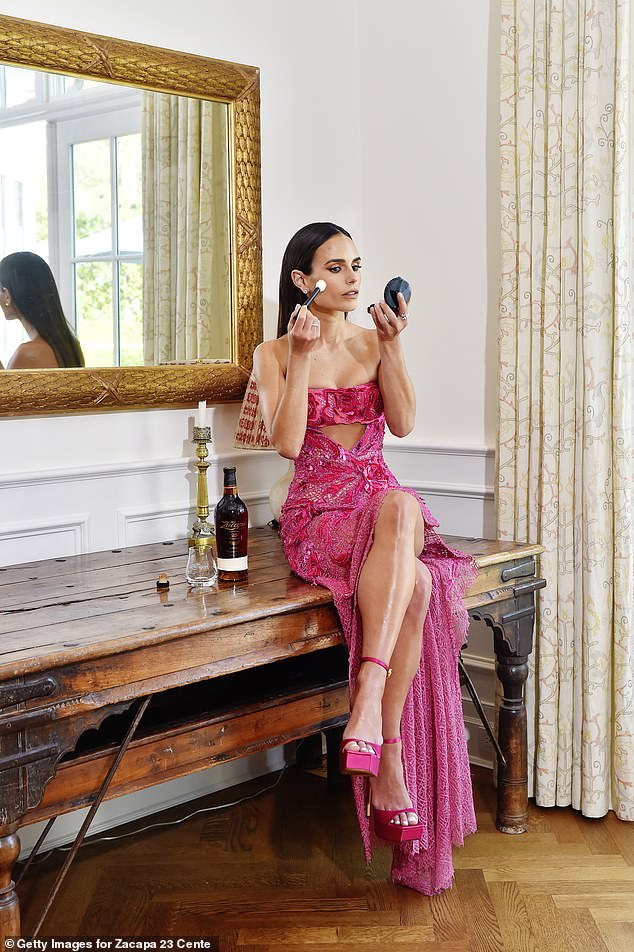 Pretty in pink: Jordana’s lacy hot pink dress had an intricate spiderweb-like design and a high slit that showcased her toned and tanned legs 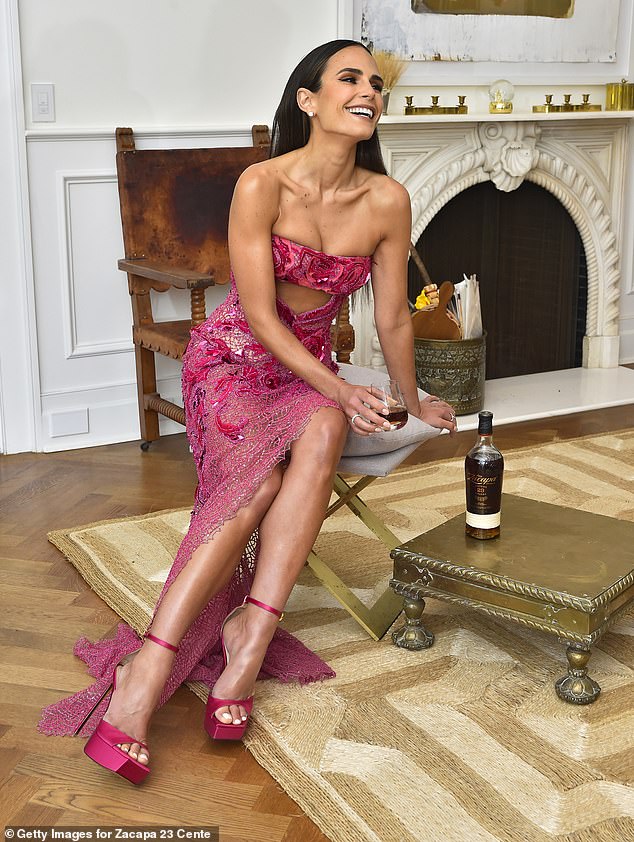 Stunner: She stood tall in magenta platform stilettos and had her lustrous raven locks swept back pin straight

Jordana added some extra elegance to the stunning ensemble with her lustrous raven tresses, which were styled pin straight.

She parted her hair down the middle and had it swept down her back.

The actress kept her accessories minimal for her red-carpet arrival, though she added some extra sparkle to her look with diamond earrings from Tiffany & Co.

On social media, Jordana revealed that her boyfriend Mason Morfit and her older son Julian Form-Brewster had accompanied her to the premiere, though she elected to walk the red carpet solo.

She and the boys made multiple pit stops on the way to the Hollywood premiere, with visits to the Chateau Marmont and Pinches Tacos beforehand.

Sparkler: The actress kept her accessories minimal for her red-carpet arrival, though she added some extra sparkle to her look with diamond earrings from Tiffany & Co. 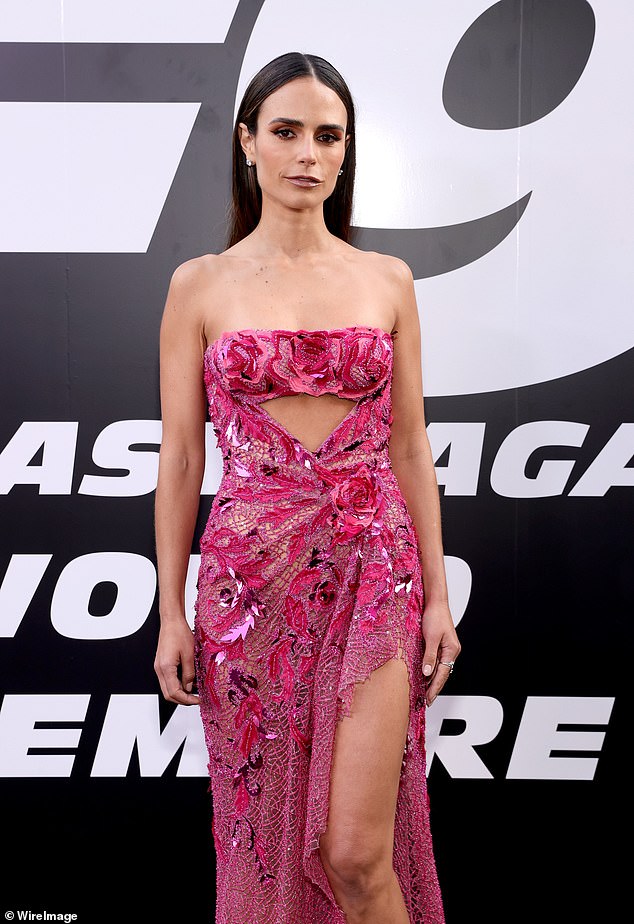 Stellar shape: The Lethal Weapon star’s dress featured a playful triangular cutout below her bust to highlight her flat midriff

Jordana made sure to pose with some of her costars and the creative team of F9 while looking her finest.

Also joining her was Tyrese Gibson, who plays Roman Pearce, and Sung Kang, who made his return to the series after appearing to have been killed Furious 7.

Standing next to Jordana on the red carpet was the film’s director, Justin Lin, who helmed the four, fifth and sixth entries in the series, before sitting on the last two films.

Charlize Theron, who plays one of the film’s villains, was also present, as were series lead Vin Diesel, rapper and actor Ludacris, Shad ‘Bow Wow’ Moss and Anna Sawai. 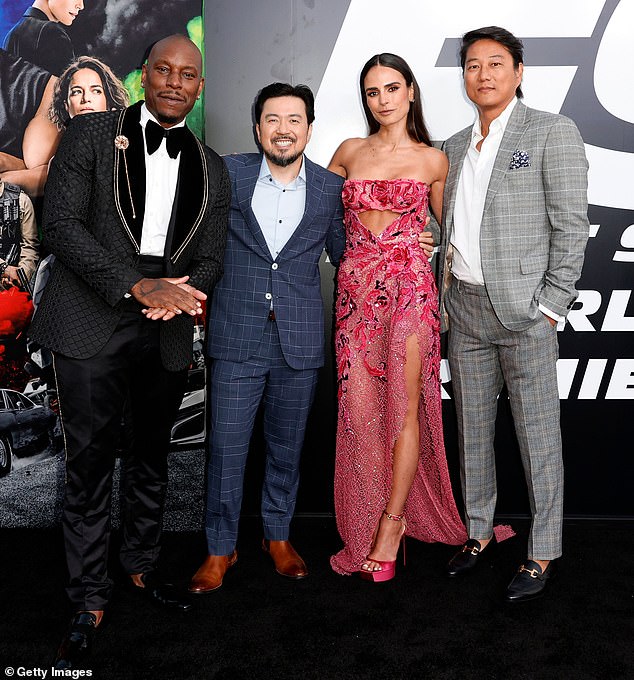 The boys: She was joined on the red carpet by her costars Tyrese Gibson (L) and Sung Kang (R), as well as director Justin Lin, who returned after two films away from the series

The new film picks up with Dom (Diesel) in retirement when his team learns that Cipher (Theron) had been apprehended, only for the plane carrying her to be hijacked.

The culprit is Dom’s long-lost brother Jakob (John Cena), who has a deep grudge against his brother going back to the death of their father.

F9 was originally scheduled for a May 22, 2020 release date, until the ongoing coronavirus pandemic forced it to be delayed.

After several new release dates throughout 2020 and 2021, the film will hit theaters across the country on June 25. 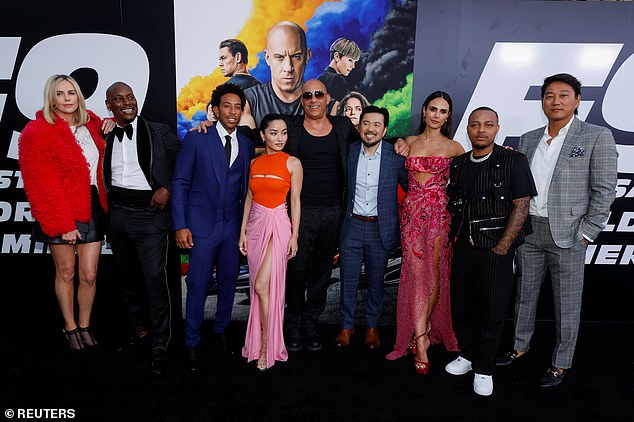 Back in action: The new film finds Dom (Vin Diesel) in retirement, until he learns that a plane carrying the villain Cipher (Charlize Theron) has been hijacked by his brother Jakob (John Cena)