Jose Mourinho’s reign at Man United is falling apart… but how did it all end at his other clubs?

The prospect of Jose Mourinho being axed by Manchester United is a very real one after the Old Trafford club made their worst start to a season in 26 years.

United players and staff are openly discussing Mourinho’s future at the club’s Carrington headquarters in the wake of Monday night’s 3-0 home loss to Tottenham.

If United suffer a third defeat on the bounce at Burnley on Sunday, there is a very real prospect Mourinho’s tenure as United boss will end just a few weeks into his third season.

There are emerging parallels between the present and some of Mourinho’s previous jobs, especially his two spells at Chelsea and his time at Real Madrid.

But how did it all end for Mourinho at his previous jobs? We take a look back. 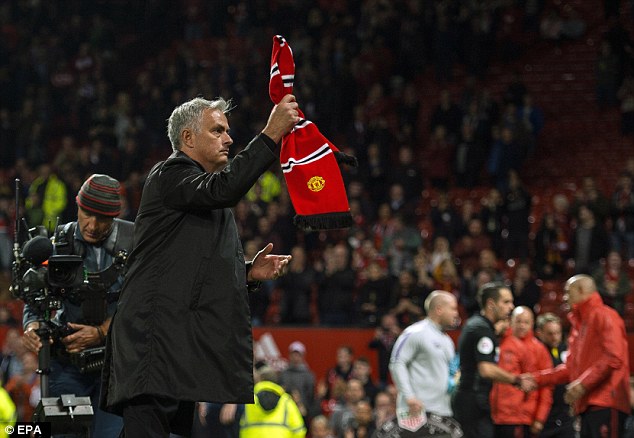 Mourinho’s first major managerial job – at Porto in his homeland – proved to be the one that spectacularly launched his career.

In just two seasons there, Mourinho guided the side to a host of domestic honours as well as triumphs in the UEFA Cup and the UEFA Champions League in consecutive seasons. 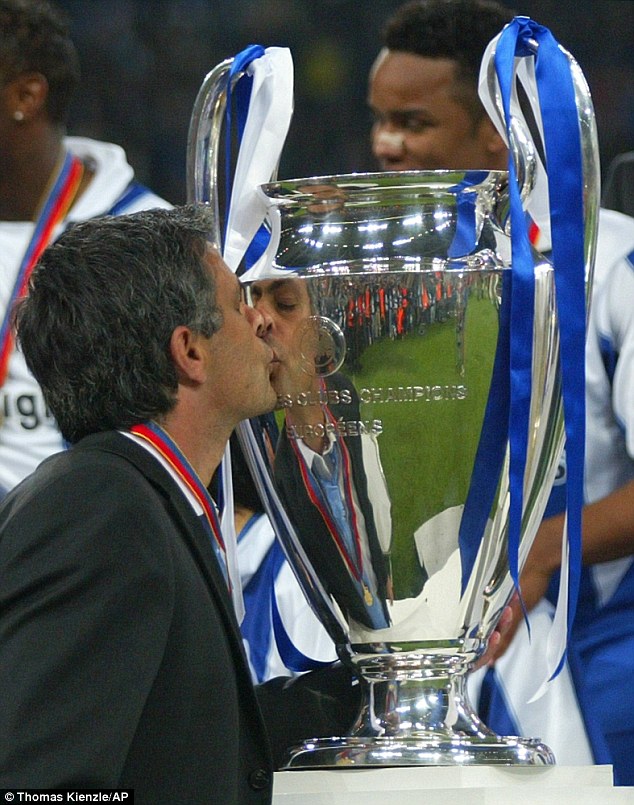 It was Porto’s run to the Champions League final, which saw them eliminate United in the last-16 and defeat Monaco 3-0 in the final, that caused his stock to soar.

After that success, Porto knew that Mourinho would be inundated with offers from the elite of European football and knew better than to stand in his way.

Liverpool were interested in hiring Mourinho but would opt for Rafa Benitez, allowing Chelsea to move for him as Claudio Ranieri’s replacement.

Ironically, Mourinho had described Roman Abramovich’s takeover of the London club as ‘an uncertain project’ that ‘does not interest me’ just a few weeks before.

Hindsight tells us that his departure from Porto would prove to be one of the few harmonious exits of his career. 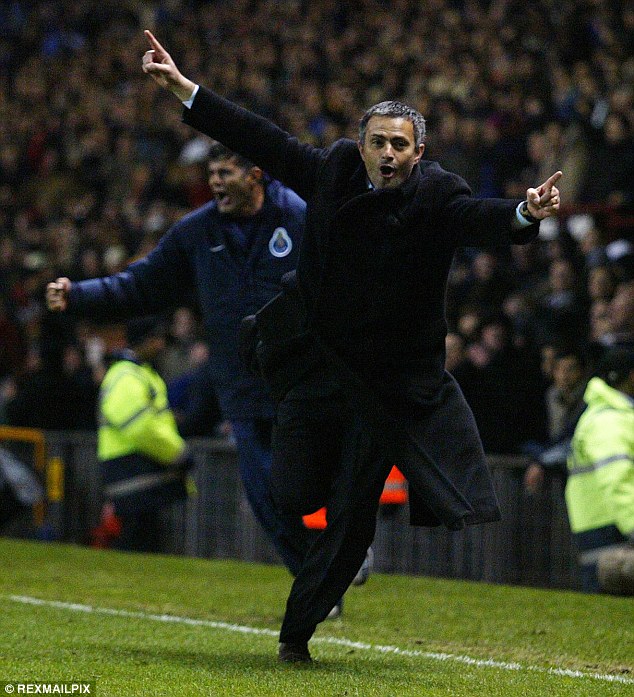 Despite winning back-to-back Premier League titles in his first two seasons with Chelsea, it quickly became apparent there was tension behind the scenes ahead of the 2006-07 campaign.

There was friction with owner Abramovich, with the signing of Ukrainian striker Andriy Shevchenko being a particular source of resentment.

Despite Shevchenko being one of the most prolific goalscorers in Europe, Mourinho had resisted this club record £30.8million signing from AC Milan and Abramovich’s insistence he play every game. 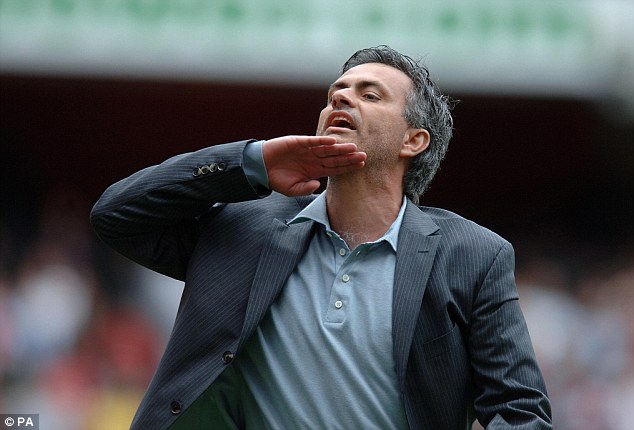 The excellent form of Didier Drogba allowed Mourinho to use Shevchenko more sparingly and he was left out of the Chelsea squad for their Champions League semi-final against Liverpool at Anfield.

In January 2007, Mourinho challenged Abramovich to back him with new signings – despite £205m worth of player investment since Mourinho arrived – or sack him immediately.

Mourinho wanted a striker that would enable Chelsea to crack the Champions League and a central defender (sound familiar?) to replace the injury-prone John Terry.

The Portuguese boss was also irked by efforts to dismiss his assistant Steve Clarke to make room for a Russian-speaking coach that would bring the best from Shevchenko. 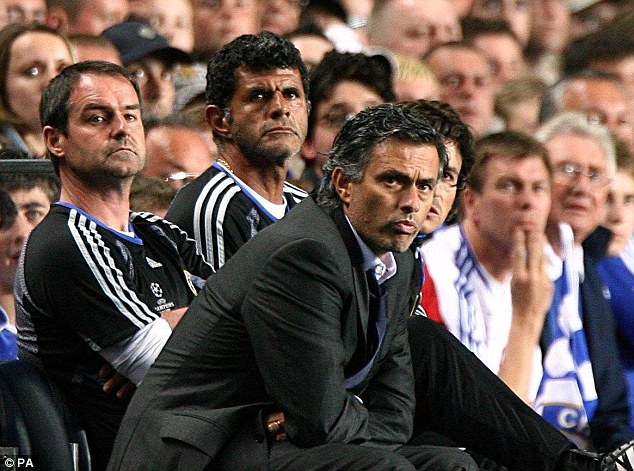 In the end, Avram Grant was appointed as director of football at the end of the season, contrary to Mourinho’s wishes, and was even given a seat on the board to further boost his influence.

Against the backdrop of this behind-the-scenes discord, Chelsea won both the FA Cup and the League Cup, though they would finish six points behind United in the Premier League.

In the Champions League, they were knocked out on penalties by Liverpool as a first final in the competition continued to elude them.

Though Mourinho completed his third season and started the next one, the underlying tensions weren’t far from the surface and he parted company with Chelsea ‘by mutual consent’ on September 20, 2007.

The chief reasons were meddling from the Chelsea hierarchy and what he perceived as a lack of squad investment. 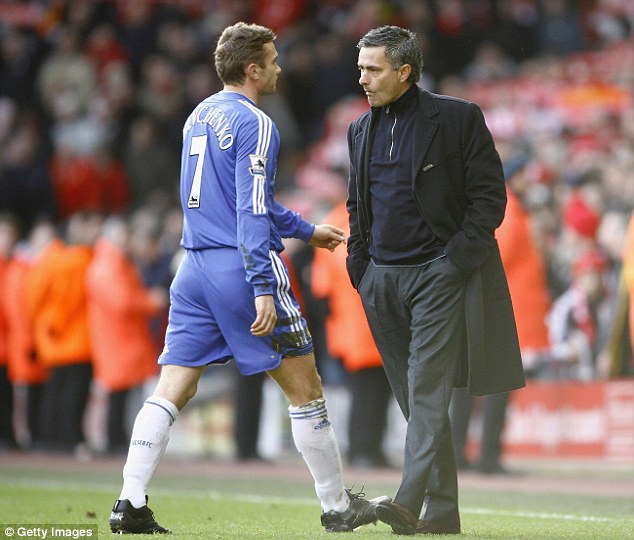 Once again a Champions League triumph proved the springboard for the next stage of Mourinho’s career as Inter Milan were powerless to resist the allure of Real Madrid in the summer of 2010.

Though Mourinho had picked a few fights during his time in Italian football – largely against pundits and referees – this was not an acrimonious departure.

Mourinho left the San Siro having led Inter to a Treble of Serie A title, Italian Cup and Champions League and the club’s hierarchy bowed to his wishes when Real’s interest became apparent. 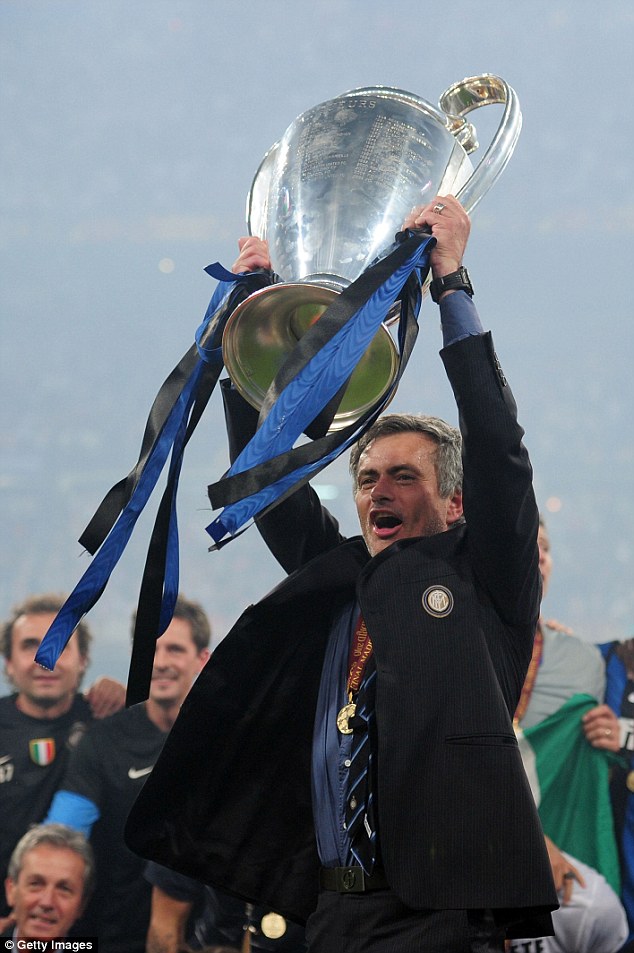 Mourinho departed Inter Milan on a high, having guided them to Champions League glory

Inter’s president Massimo Moratti did try and tempt Mourinho to stay for a third season with an improved contract, but the accomplishments of that season meant he had achieved everything he set out to.

On the eve of the Champions League win over Bayern Munich, by which time his likely departure was an open secret, Mourinho said: ‘I’m so sad as almost for sure it’s my last game with Inter.

‘If you don’t coach Real Madrid then you always have a gap in your career. It was difficult to leave Chelsea and it will be sad to leave Inter. 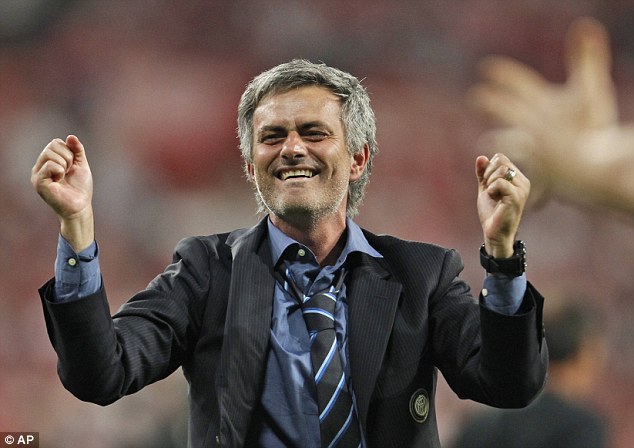 ‘Inter is my house in the same way Chelsea was my house. But that’s life, that’s football.

‘I believe my target now is to win another championship that I’ve never won and win the Champions League with a third club.’

Rather than acrimony, it was Mourinho’s ambitions that caused him to leave Inter.

All was positive for Mourinho in the summer of 2012. Real Madrid had just broken Barcelona’s stranglehold on La Liga and he had been rewarded with a fresh four-year contract.

But with Mourinho not the kind of manager to stay in the same place for too long, the third season syndrome soon kicked in as tensions surfaced.

Though they started the season by beating Barcelona to win the Spanish Super Cup, their rivals set a scorching pace in the league and by the mid-way point, Real trailed by a colossal 18 points. 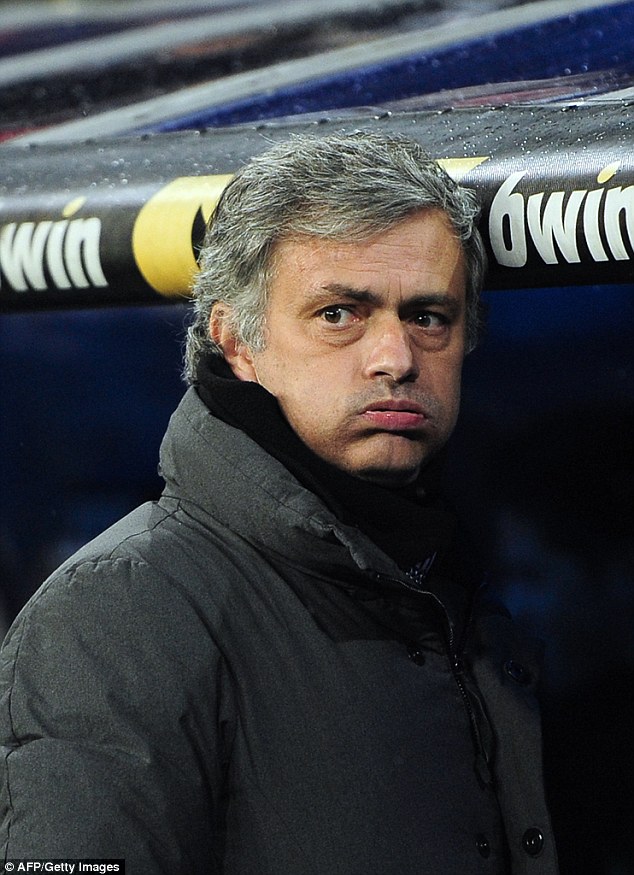 Their on-field implosion, which saw four league defeats before Christmas, was accompanied by Mourinho becoming more combustible off it.

There was the usual friction with the media, which came to a head after defeat by Borussia Dortmund in the semi-finals of the Champions League. ‘Here some people hate me… and many of you are in this room,’ he told a press conference.

His fraught relationship with club stalwarts Iker Casillas and Sergio Ramos divided the fanbase between the so-called Mourinhistas and the Madridistas.

There was then criticism of talisman Cristiano Ronaldo and, after one falling out, the manager claimed his compatriot ‘maybe thinks that he knows everything and that the coach cannot improve him anymore.’ 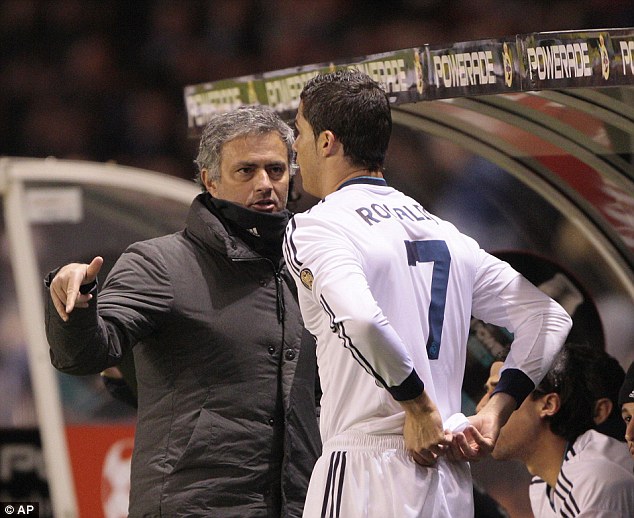 But his greatest opprobium was reserved for striker Karim Benzema – one such critical comment came when Gonzalo Higuain was injured: ‘If I can’t hunt with a dog, I will hunt with a cat.’

The tension grew into controversial incidents, such as when he poked Barcelona assistant coach Tito Vilanova in the eye during a brawl. He was also sent to the stands during a Copa del Rey loss to Atletico Madrid.

Referees, the Real board, UEFA officials and journalists were all targets as Mourinho spent his third season at the Bernabeu lighting fires in the way he does.

After the Atletico game, Mourinho described the season as ‘the worst of my career’ and he departed by ‘mutual agreement’ three days later in what became a relief for president Florentino Perez.

A major contributing factor was Mourinho’s failure to deliver the Champions League – they had won their ninth back in 2002 and were desperate for the 10th – and that made him a disappointment in the eyes of many fans.

The fact Mourinho signed a new contract before things started to unravel is a definite parallel to his current situation at United. 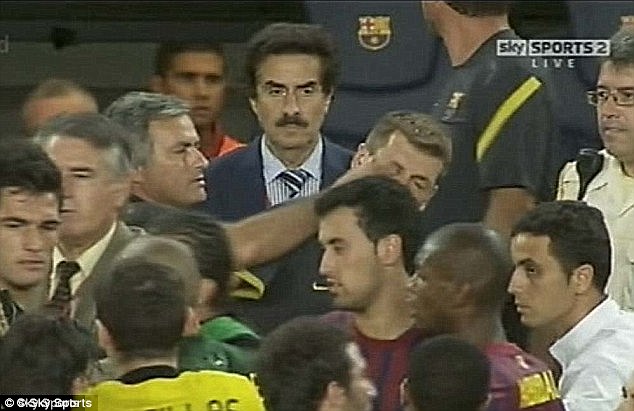 In what is becoming a running theme, all should have been sweetness and light for Mourinho in the summer of 2015. He’d just guided Chelsea to the Premier League title and been rewarded with a four-year contract.

But it didn’t take too long for everything to spiral out of control. On the opening day of the season, with 10-man Chelsea level at 2-2 with Swansea, Mourinho laid into team doctor Eva Carneiro when she instinctively ran on to treat Eden Hazard during stoppage time. 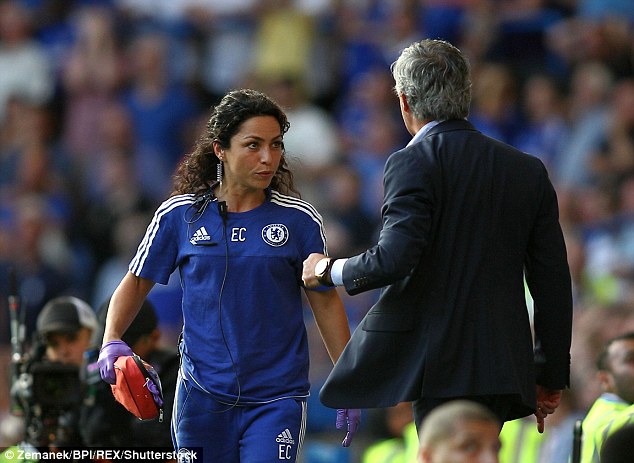 Mourinho berated her because Chelsea were briefly left to play with nine men with Hazard off the pitch.

The incident made the headlines and the revelations that followed, including allegations Mourinho swore at Carneiro, sparked a swift and brutal end to his second spell at Stamford Bridge.

A dreadful sequence of results, which saw Chelsea lose seven of their opening 12 Premier League games, saw them deep in the bottom half of the table and the pressure continued to mount. 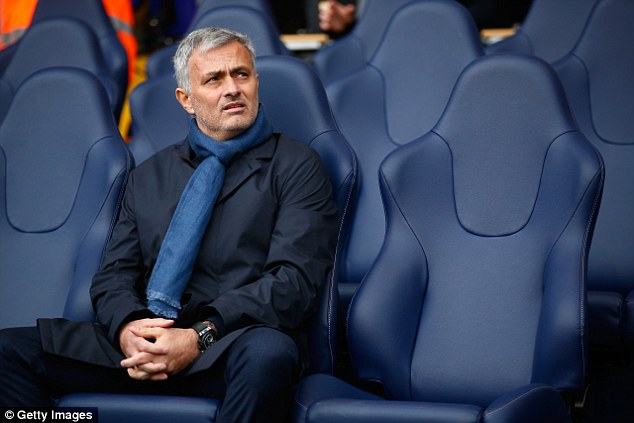 They were relegation candidates down in 16th, with a record of nine losses from their opening 16 games, by December and that was the end for Mourinho, who parted company ‘by mutual consent’.

It was the most dramatic of all Mourinho’s implosions and their terrible form on the field gave Abramovich little choice.