Josh Donaldson hit a walk-off grand slam in the 10th inning as the clock struck midnight to provide a fairytale ending for the New York Yankees.

The struggling Yankees salvaged an 8-7 win over the Tampa Bay Rays on Wednesday night to avoid a three-game sweep.

The home team looked set for another night of despair as it fell three runs behind at the top of the 10th, despite having wiped out a four-run deficit to force extra innings. 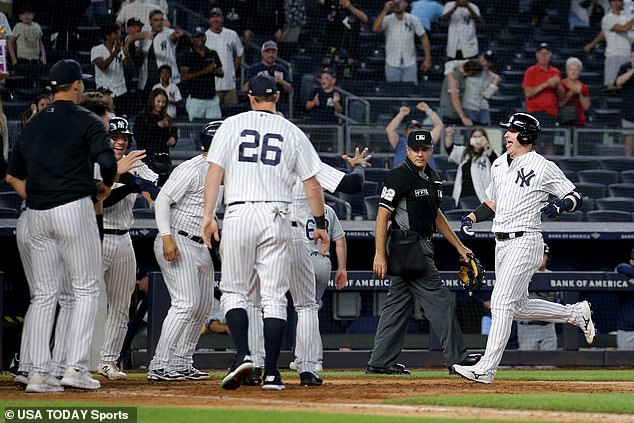 But with all the bases loaded, Donaldson salvaged New York with a dramatic walk-off grand slam.

Gleyber Torres singled leading off the 10th of Jalen Beeks (2-2) and Anthony Rizzo walked before Donaldson lifted a one-strike, 97 mph fastball to the short porch in right field. He flipped his bat and raised his arms immediately after he connected.

Aroldis Chapman (2-3) gave up three runs in the top of the 10th for New York, which entered having lost three straight and 12 of 15. 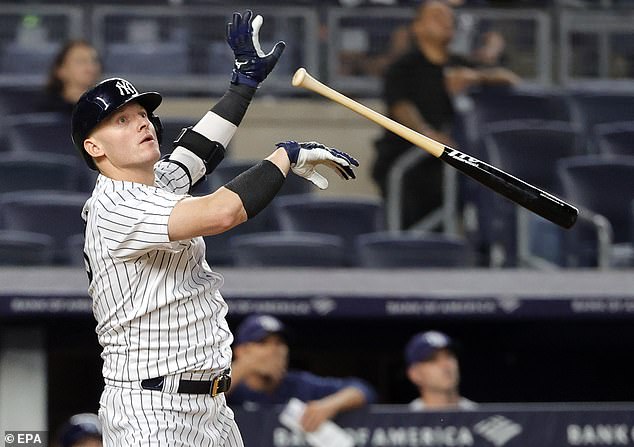 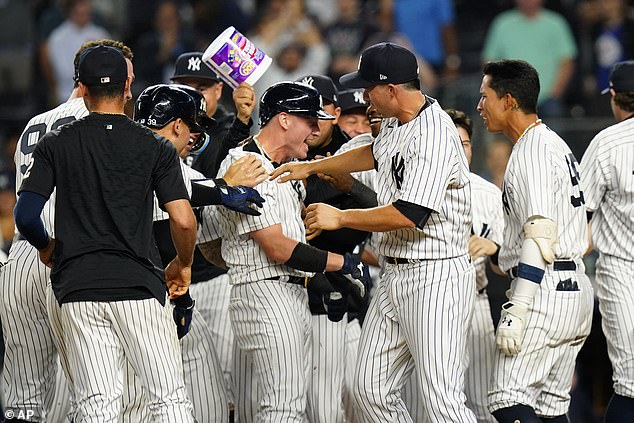 But the Yankees finally got some help from their offense, scoring more than three runs in a game for the first time since August 8 – New York had totaled one run in its past three games.

The Rays led 4-2 when the game was stopped by rain with one out in the top of the seventh. The ensuing 1-hour, 3-minute delay was worth it for the Yankees, who ended Tampa Bay’s four-game winning streak.

And the Yankees and social media went wild in celebration.

Donaldson’s teammates in the dugout could be seen leaping over the barriers and rushing to the plate as they waited to give him a hero’s welcome as he rounded the bases. 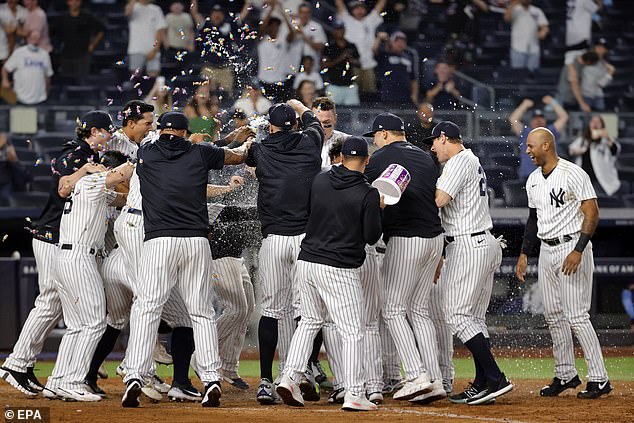 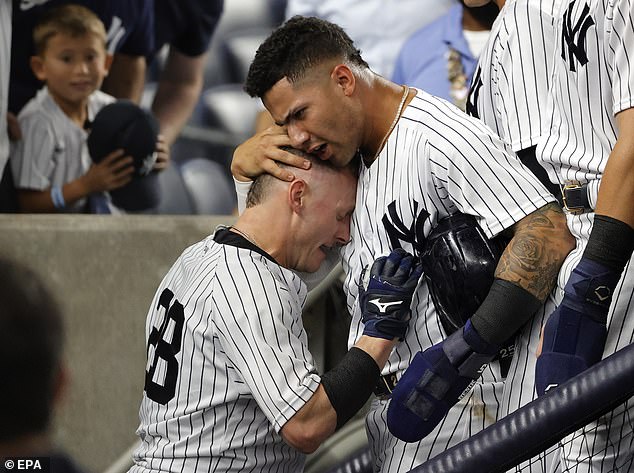 Meanwhile, social media users praised Donaldson for the much-needed win as they claimed he had turned the Yankees’ season around.

One fan declared: ‘THIS WILL BE REMEMBERED AS THE NIGHT THAT JOSH DONALDSON SAVED THE YANKEES SEASON.’

Meanwhile, Donaldson’s walkoff caused another to have an out-of-body experience as they simply wrote: ‘DONALDSON. WALKOFF. YANKEES WIN. OUT OF BODY EXPERIENCE’

ESPN and YES sportscaster Ryan Ruocco claimed it was the ‘biggest swing of the season for the Yankees.’

MLB. com Executive Reporter Mark Feinsand claimed it was a huge hit for both the Yankees and Donaldson, who needed to win back the home crowd.

He posted: ‘Josh Donaldson knew that one was gone the moment he hit it.

‘Huge hit for the Yankees, huge hit for Donaldson, who had been hearing it from the home crowd of late. His biggest hit of the season lifts the Yankees to a much needed win.’

Although the Yankees are 9-16 since the All-Star break, their AL East lead moved back to 10 games over Tampa Bay and Toronto. New York has led the division by double digits for all but two days since June 13.