Paul Green’s close friend Josh Hannay has labelled coaching in the NRL a ‘brutal industry’ and admitted the last few years took a toll on his mentor.

Hannay, 42, who was an assistant coach with Queensland’s triumphant State of Origin side last month, first worked with Green as an assistant with the Cowboys in 2017.

The pair guided North Queensland to the NRL grand final against all the odds after finishing in eighth spot, but were beaten 34-6 by a red-hot Melbourne Storm.

Hannay, who was a star centre in his NRL playing days in Townsville, was named interim head coach of the Cowboys when Green walked away in 2020.

He was also the caretaker head coach at Cronulla – where Green won the Rothmans Medal in 1995 – last season. 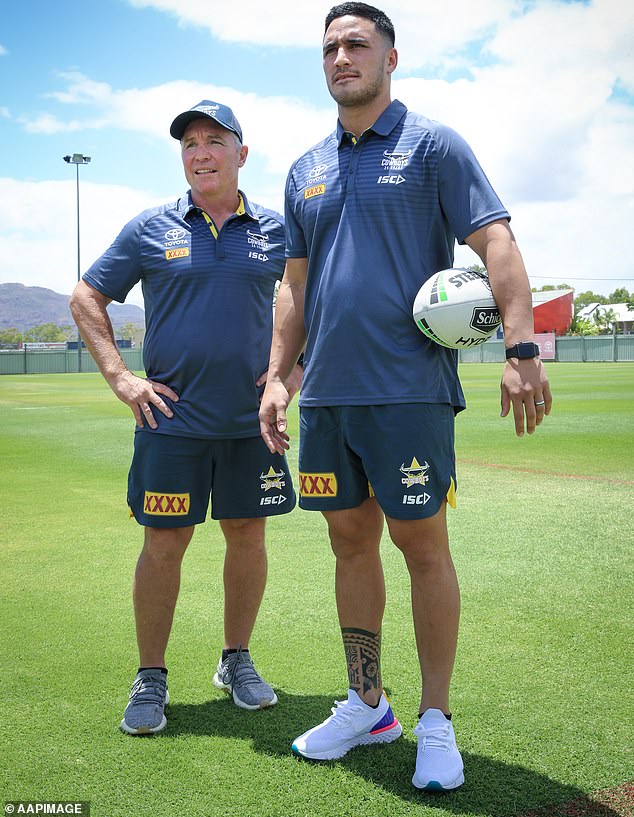 Green walked away from the Cowboys top job in 2020 but felt he had more to give at NRL level (pictured, with Valentine Holmes)

‘This industry we’re in, right, it’s a brutal industry. I know that on a professional level, the last few years have been really challenging for Greenie.’

Hannay added the industry was either ‘lifting you up or tearing you down’ and it can be an unforgiving environment where results are always of paramount importance.

The close mates caught up in Sydney last weekend at a Cronulla Sharks reunion and Hannay said Green was in good spirits and as always, the ‘life of the party’.

John Cartwright, an assistant coach to Green when the Cowboys won the 2015 premiership, said the former halfback had given him a second chance at coaching when he thought his time had passed at NRL level.

‘I was coming to the end of my coaching career at the (Gold Coast) Titans and was a little bit lost,’ he said.

‘I then received a call out of the blue — Greenie asked me to come up and join the Cowboys.’ 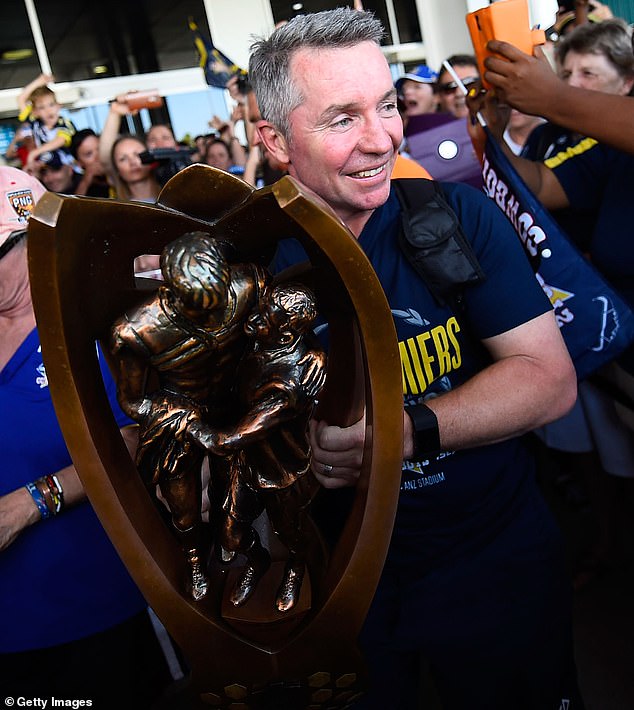 Initially Cartwright was hesitant due to his head space at the time, but after mulling it ove, felt it was too good an opportunity to pass up.

He has since gone onto work with the Manly Sea Eagles and is currently employed by the Brisbane Broncos under Kevin Walters.

Queensland Police were called to Green’s family home in Wynnum, in Brisbane’s east, just after 10am on Thursday after he was found unresponsive in his garage.

A police spokeswoman told Daily Mail Australia that Green, 49, was declared dead at the scene by paramedics.

It has since been confirmed Green took his own life, and he leaves behind his wife Amanda and their children, Jed and Emerson.