Comedian Josh Thomas has been slammed for controversial comments in the wake of the Black Lives Matter movement.

The Please Like Me writer, 33, said that it was ‘difficult’ to find experienced actors who weren’t white, and that meant many shows had no ethnic diversity.

He also said it would be a ‘lie’ to cast a 7-Eleven worker who wasn’t Indian, implying that everyone who works in the store is of Indian heritage.

In the clip, filmed during a 2016 panel discussion about screenwriting, Thomas is discussing the difficulties he faced casting non-white actor.

Warning the audience ‘this is going to sound racist’, Thomas claimed there were few experienced black actors.

‘Most of the immigrants in Australia have come pretty recently,’ he said.

‘And generally, first or second-generation immigrants don’t want to be actors. They have real jobs.

‘The other thing I didn’t know about making a TV show that I found quite confronting is you have to pick every person. ‘

‘”Josh, what do you want the 7-Eleven worker to look like?”

‘Do you make them Indian, or is that offensive? Or if you make them white, is it a bit like you’re lying, really? What do you do?’

As the clip resurfaced online this week in the wake of the global Black Lives Matter movement, fans were quick to denounce his comments. 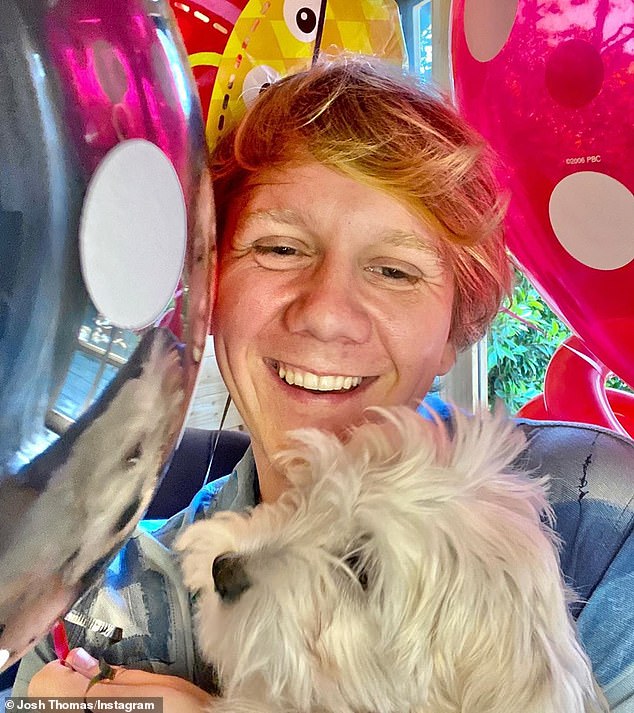 Josh Thomas (pictured) has admitted he is ‘ashamed’ of his past comments, calling himself a ‘dumb, illogical, insensitive idiot’ 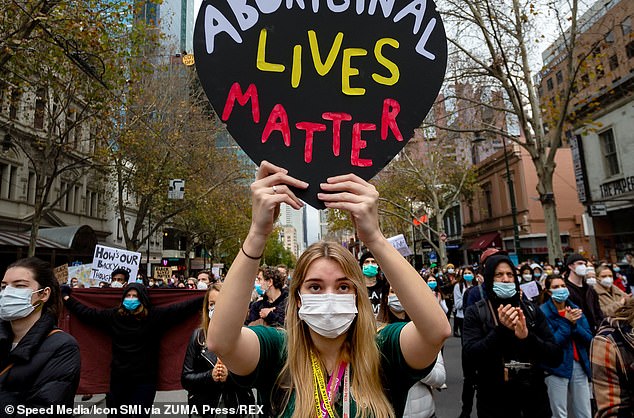 The clip appeared online amid the Blacks Lives Matter movement (pictured, a protest in Melbourne on June 6)

Another tweeter commented that Thomas himself had no acting experience, after he claimed it was hard to find experienced non-white people to take roles

‘Has anyone told Josh Thomas that 44:00 onwards of this The Writer’s Room is infamous in many-a rooms/masterclasses?’, one wrote.

‘The shorthand is “Don’t be The Josh of the room”.’

Another said: ‘Josh Thomas, with no acting experience, wrote himself the lead role in his show and cast his white friends (also not actors) in the same show. But ok sure people (of colour) should only be hired if they come with extensive experience!!!!’

One added: ‘All blackfullas can stay home today. Josh Thomas has organised for your jobs to be given to “more talented” white people.’

His comments came to light after the comedian started a campaign for Coon cheese to be renamed, saying the word was ‘hate speech’. 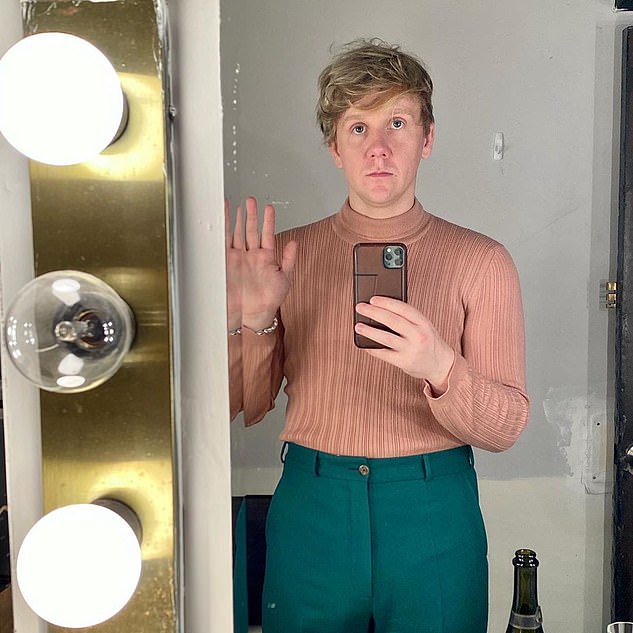 The Please Like Me star shared a photo of Coon cheese – found in supermarkets across Australia – alongside the caption: ‘Are we still chill with this?’ 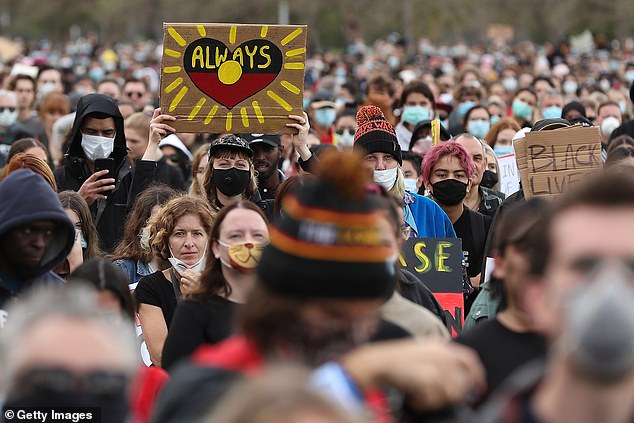 Protesters are seen at Langley Park in Perth (pictured on June 13) during a Black Lives Matter rally, with discussions going on across the world about racial inequality

Thomas has since apologised to fans for his past comments in a statement posted on Twitter, admitting he was ‘ashamed’ of himself.

‘There is a clip circulating on Twitter of me on a panel a few years ago talking about diversity casting, and in it I am being a really dumb, illogical, insensitive idiot and it’s gross,’ he wrote.

‘I’m super ashamed of the comments I made, and would like to apologise.’

The comedian has called for Coon cheese to be renamed, as the word is also a racist slur.

He shared a photo of the cheese – found in supermarkets across Australia – alongside the caption: ‘Are we still chill with this?’

Made by the Warrnambool Cheese and Dairy Company in Victoria, the cheese is named after its American creator Edward William Coon, who patented the unique ripening process behind the brand. 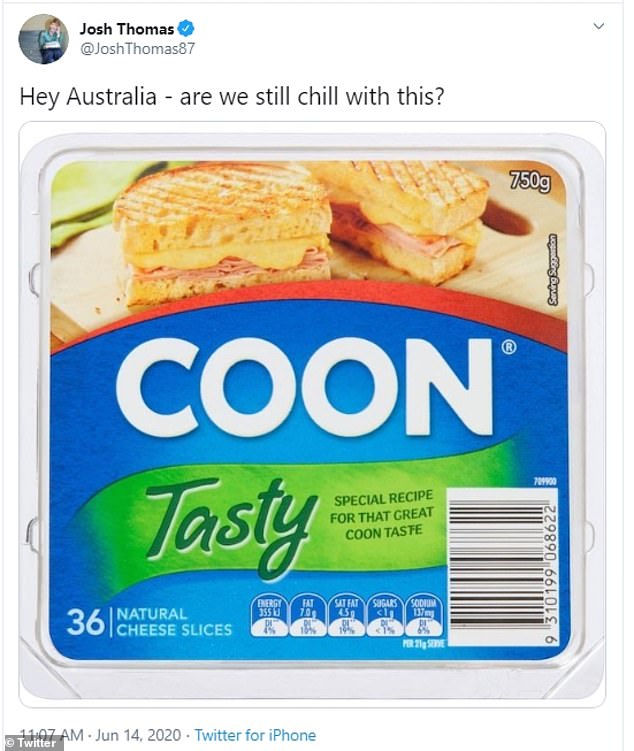 The cheese (pictured) is named after company founder Edward William Coon, but the word is also a racial slur

But Thomas argued it was out of touch to still honour the cheese’s creator more than 85 years after his death while disrespecting those for whom the term is still an ethnic slur.

‘It’s amazing the respect people have for the name of a man who invented a processing technique of cheese – who died in 1934. And the disrespect they have for black people,’ he wrote on Twitter.

The word is pejorative when used as a reference to those with dark-coloured skin – including those of African-American or Aboriginal descent.

In another tweet on the topic, Thomas said changing the name of the brand to something more inclusive would communicate to indigenous Australians ‘we see them, understand their pain and respect them’. 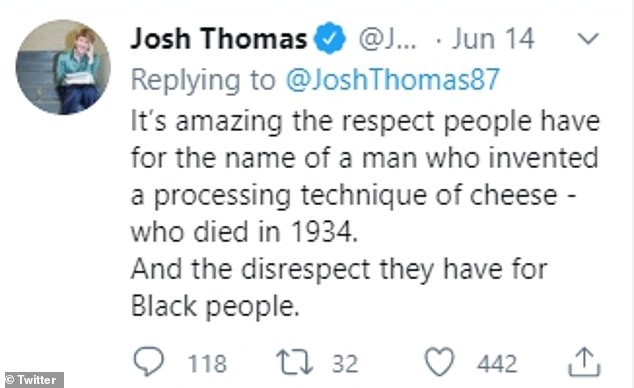 Thomas’ followers were split on the subject, with many agreeing the name should be changed – but others saying it simply referred to the product’s creator.

‘Regardless of the brand names history, times have well and truly changed,’ one person wrote. ‘In my 35 years it has been nothing but a racist term in the common vernacular.’

Entertainment reporter Peter Ford said the cheese’s name had nothing to do with the racial slur.

‘You do realise it’s named after the cheesemaker with that surname?’ he said.

‘I feel like your just stirring the pot now,’ another added.

‘It was named after the guy who made it… taking the cheese off the shelf won’t stop the racist attitudes that people in this country have. It also won’t take back any of the racial history here either. So many other things to change.’

‘There is a clip circulating on Twitter of me on a panel a few years ago talking about diversity casting, and in it I am being a really dumb, illogical, insensitive idiot and it’s gross.

‘I’m super ashamed of the comments I made, and would like to apologise.

‘Authentic diversity in casting (and behind the scenes) is something that is really important to me, and that has been important to me for a long time.

‘When making Please Like Me I always went into the casting process with it as a top priority and then fell short, many times.

‘The conversation about why the casting process in Australia is structured to keep out people who aren’t white and straight, with symmetrical faces and no body fat percentage – is an important one to have.

‘But the answers I offered in this clip are in no way constructive or correct. I am committed to doing better.’