Lonely Australians are now attending ‘cuddle parties’ with complete strangers in a desperate bid to cure their loneliness and boost their oxytocin levels.

For an upcoming documentary, SBS journalist Laura Murphy-Oates, 27, recently attended one of the unique gatherings in Canberra where she found herself snuggling up to strangers while a qualified touch therapist facilitated the session.

The documentary, which is set to air on Thursday at 9.30pm on VICELAND, shows the participants cuddling up together in the therapist’s home studio and told to never act on any feelings of ‘arousal’ they may experience.

How do cuddle parties work?

Strangers arrive at the host’s home before the host sits them down and tells them how they are going to ‘touch each other’.

They lay on bean bags and cushions and are encouraged to touch those near them in a ‘simple, non-threatening way’ with consent.

For the next hour or two they hold hands, cuddle, chat or lie peacefully together until the party ends.

The parties are hosted by a touch therapist who believes they are a ‘powerful tool for wellbeing’ and for those struggling with loneliness.

In a preview for the show, the group of strangers are seen dressed casually and addressing their feelings of loneliness.

‘You just sort of sit back and reflect on your life and I used to be happier at another time,’ one party participant, Tom, said in a piece to camera.

‘As someone who is a father and then all of a sudden they grow up, suddenly you’re not getting cuddles,’ he added.

Joe, a female participant said: ‘I’ve been kind of torturing myself by isolating myself. Not giving myself what I need and I need what these guys are having.’

Other footage shows Laura giving head massages while lying on a mat on the floor while others embrace nearby.

The group facilitator, Jasmina Bacic, says it’s crucial that those who attend ‘cuddle parties’ never act on any feelings of arousal or excitement and to embrace them as ‘normal’.

‘It’s normal that those things are happening, if they are not, I would be worried actually,’ the touch therapist said. ‘So if it happens, the story is just to not act on it and it will go,’ she said.

‘Most of them come here very unsure as to what’s going to happen, and they all walk out very happy. They start thinking differently, have happier and more positive thoughts.’

Road test: In a preview for SBS’ VICELAND, Laura, 27, visits a ‘cuddle party’ in Canberra, New South Wales, to see if it could cure loneliness

Towards the end of the cuddle party, Laura said she felt herself ‘getting into it’, and while she might not make it a regular part of her weekend, she ‘made a few friends’.

According to CEO of Relationships Australia New South Wales, Elisabeth Shaw, loneliness is becoming an epidemic across the country.

‘We’ve got to get out of that stereotype that it’s only elderly people that are lonely,’ she told ABC Life in November.

Professor Adrian Franklin of the University of Tasmania also told FEMAIL that loneliness is not just a lack of having people around.

‘A lot of people think loneliness is not having lots of people in your life, but actually loneliness is when people lack high quality, meaningful or strong relationships,’ he said.

Aroused? The group facilitator says it’s completely normal to get turned on, but you must not act on it 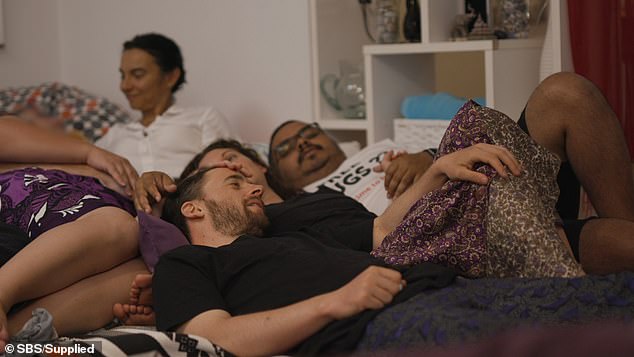 Part of the process: ‘It’s normal that those things are happening, if they are not, I would be worried actually,’ Jasmina Bacic says. ‘The story is just to not act on it and it will go’

Affectionate: The documentary, which airs on Thursday night, sees Laura patting heads while lying on mats on the floor

The 2018 Australian Loneliness Report released figures on just how widespread loneliness is in Australia.

One in four Australians admit to feeling lonely each week, while one in two feel lonely at least one day in the week.

Around 55 per cent of the population feel they don’t have social support, and one in four say they experience high levels of social interaction anxiety.

The Feed airs at 9.30pm on SBS VICELAND Thursday 28 February.