A woman with cerebral palsy who had exclusive tickets to one of Pink’s Sydney concerts was turned away and forced to sit alone in a different seat because she was in a wheelchair.

When Ms Katene and her friend, Bert Hibbert, were ready to enter the general admission area, they were refused entry.

Just a week prior to the Sydney event, Mr Hibbert and Ms Katene had attended one of the singer’s Melbourne concerts in the general admission area, and were lucky enough to be just one metre away from the stage.

So they were surprised when after lining up outside Sydney’s Qudos Bank Arena from 2pm, including clearing security and being given their wristbands, they were told by a manager they wouldn’t be allowed into the VIP area.

‘The first one we refused, because they were cheap wheelchair seats and no one was there, so we couldn’t mix with people socially.’

After the discussion, Ms Katene was told by the venue’s management that they would be allowed into the general admission floor before the other ticket holders, to ensure her safety.

‘When we were speaking peacefully, politely and having a respectful conversation with the manager, it was fine and he understood where we were coming from,’ Mr Hibbert said.

‘He understood that we made new friends in the line and he understood why we wanted to be among people.’

When management went to discuss this with a security guard, they were denied once again, being told they had to settle for the wheelchair seats or had to leave the venue.

Mr Hibbert and Ms Katene were then introduced to the head of security who said  they had a policy that wheelchairs weren’t allowed on the floor.

Mr Hibbert requested to see the policy, and after 20 minutes of back and forth conversation, wasn’t shown anything. 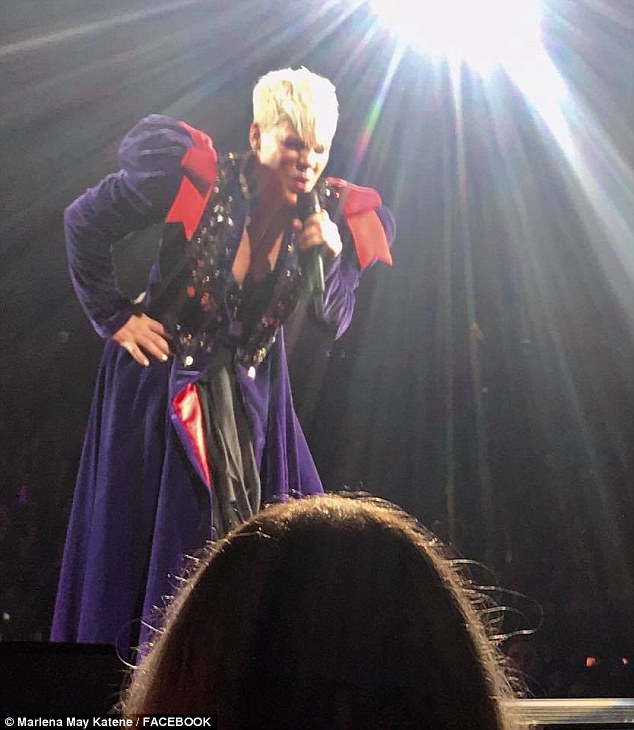 Just a week prior to being turned away from the VIP area, Ms Katene enjoyed the Melbourne concert from the general admission area, where she managed to get just one metre away from the stage to capture this image

‘When they couldn’t show me the policy, it changes from being a rule implemented by the venue’s security, to Pink’s security,’ Mr Hibbert said.

Once Mr Hibbert threatened legal action, he said that the head of security claimed the area was for ‘general admission standing’.

‘He said, “Oh, we don’t allow camp chairs on the floor, we don’t allow people to bring their own chairs, so why would we allow you, because it’s general admission standing”,’ Mr Hibbert recalled.

‘I looked on the ticket, there’s no general admission standing written on there.’

Venue staff attempted to offer the pair free food, free merchandise and then a refund of the ticket, but they refused.

Mr Hibbert and Ms Katene made it clear that they had paid a lot to travel to Sydney from the Gold Coast in Queensland, and just wanted to experience the concert among other fans. 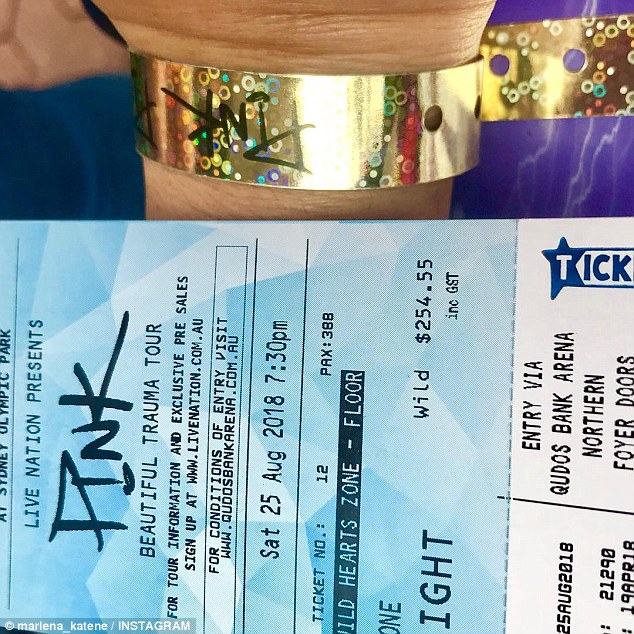 Ms Katenes friends, Bert Hibbert, was told that they weren’t allowed into the VIP area as it was for ‘standing’, yet their VIP tickets (pictured) didn’t have standing on them

Security attempted to explain that the view would be better from the elevated wheelchair-assigned seats, but Ms Katene and Mr Hibbert didn’t agree.

‘We’ve seen this show before, we know where the best seats are which is why we purchased what we purchased,’ he said.

They also made a point that when wheelchair users purchase tickets to concerts they are given a free companion ticket, but the pair didn’t go down that route because they wanted to be immersed in the general admission experience.

Mr Hibbert ended up being escorted out of the venue for trespassing, after Ms Katene was seated ‘up the back in a corner’, where she was completely alone.

After he filmed a video to showcase the difference in their seating, a security guard approached Mr Hibbert and said that he was being ‘aggressive’.

‘He walked away and I was talking to Marlena and I said well, we may have to leave because this isn’t on. It’s not appropriate what they’re doing,’ Mr Hibbert said.

He was told that if he came within 50 metres of the venue, then he would be arrested. 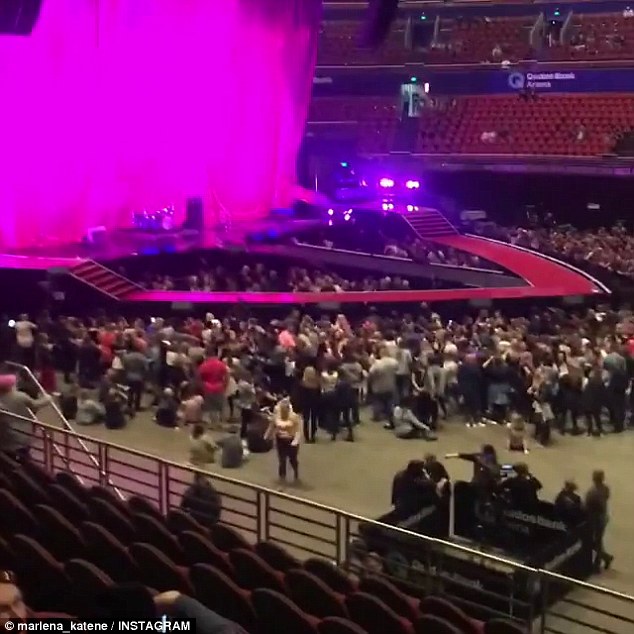 Mr Hibbert managed to film the difference between where they were supposed to be sitting, and where they got forced to sit

But when Mr Hibbert asked police if that was a legal offence, the officers told him he didn’t do anything wrong.

Asked if Ms Katene enjoyed the concert, Mr Hibbert said that it wasn’t the same after going through the ordeal.

‘This isn’t the first encounter like this we’ve had. It’s been the first blatant encounter. These guys weren’t smart,’ he said.

Mr Hibbert contacted the venue prior to the event to let them know that a wheelchair user had bought tickets in the VIP area, but no one responded to him, making the situation all the more disappointing for Ms Katene.

‘The security guards assumed Marlena’s risk – she’s fine, she BASE jumps and skydives. That’s up to Marlena to make the decision,’ he said.

‘You’re never going to eliminate that risk totally for human beings unless we all stay at home. 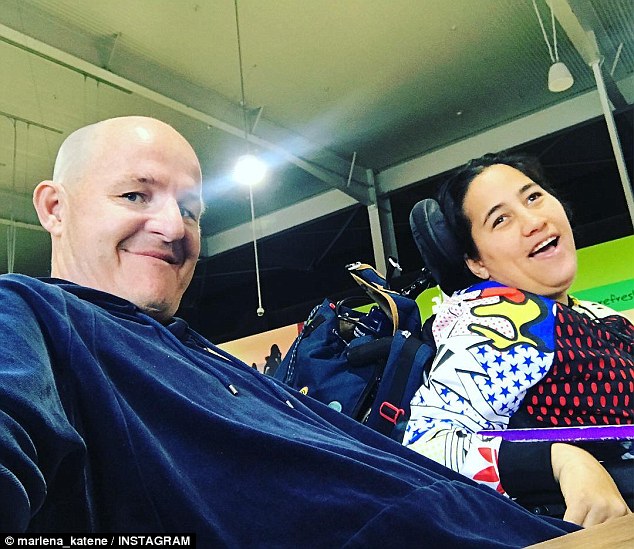 Mr Hibbert and Ms Katene travelled down from the Gold Coast, in Queensland, to attend the Sydney concert

‘I’m not saying a wheelchair isn’t 100 percent safe on the floor, but in the context of things, it’s as safe or as dangerous as if it wasn’t on the floor.’

Qudos Bank Arena General Manager, Steve Hevern, said that safety of all patrons is of paramount importance and that is what guides security’s decision-making.

‘Safety is one of the primary areas of the venue’s operation, for which we are responsible,’ Mr Hevern said.

‘We respect Ms Katene’s enthusiasm and excitement to enjoy the concert in the way she had anticipated, however we have a duty of care to Ms Katene as well as all other patrons to ensure a safe event for all.’

Mr Hevern also said that they had been in contact with Ms Katene prior to her attendance at the arena to explain requirements about her safety.

‘Our goal was to provide a safe alternative in an equivalently-priced location to ensure the best possible experience for Ms Katene,’ he said.

‘We are disappointed our efforts to safely accommodate Ms Katene did not meet her expectations, therefore we provided a full refund to her and Mr Hibbert (who accompanied her to the concert).’