Joy Reid, whose pointed scrutiny of President Trump and commentary on liberal politics catapulted her into television fame, will host a nightly news program on MSNBC – making her one of a ‘handful’ of Black women to anchor an evening news show.

Reid, 51, will make her official debut on July 20 and will hold the coveted 7pm slot with her show ‘The ReidOut.’

It will take over the time slot from ‘Hardball with Chris Matthews’ after the 74-year-old  host was forced to resign in March over allegations of sexist workplace behavior and several on-air missteps.

Reid previously hosted the MSNBC weekend talk show ‘AM Joy,’ which began in 2016 and was named the top cable television show for African Americans during the weekend time slot.

Her promotion with MSNBC is a notable decision by NBCUniversal News Group’s chariman, Cesar Conde, as several newsrooms face a reckoning over lack of diversity amid a resurgence of the Black Lives Matter movement.

Conde, a former Telemundo chairman, said this week that he wants the network’s work force to be 50 per cent nonwhite with staffers split evenly by gender.

Black women, including Robin Roberts of ABC News and Gayle King of CBS News, hold prominent positions for morning and daytime shows, but none currently lead an evening show on a major US network.

Fox News’ Harris Faulkner is the only Black women to currently solo anchor a daytime solo hour with her television series ‘Outnumbered Overtime with Harris Faulkner.’

Gwen Ifill, a co-anchor on ‘PBS NewsHour,’ was  the last Black American woman to spearhead an evening show before she died of breast and endometrial cancer in 2016.

Ifill, who was the first Black American to host a nationally televised  public affairs show in 1999, was one of several Black anchors that inspired Reid. 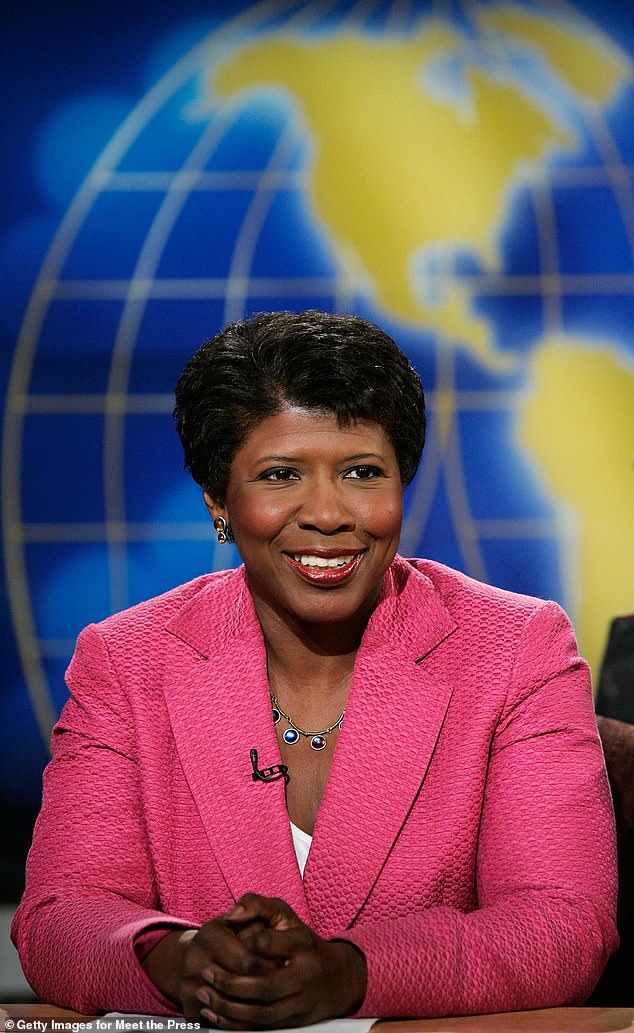 Gwen Ifill (pictured), co-anchor for ‘PBS NewsHour,’ was the last Black American woman to host an evening news show before she died in 2016

‘Evening and prime-time news has been a universe of white men really since I was growing up,’ Reid told The New York Times.

‘For somebody who grew up as a nerdy kid obsessed with news, watching ‘Nightline’ and ‘Meet the Press,’ the idea of being a part of that family has always just been kind of overwhelming,’ she added.

The ReidOut’ will film in Washington D.C. with an emphasis on political analysis and punditry, but will also examine race, policing, class systems and other ‘cataclysmic social issues we need to reckon with.’

‘I am a Black mom, a Black woman, a Black daughter,’ said Reid, who has three children.

‘I am also a journalist who can conceptualize that pain from a unique point of view. Every day I’m in this job, I’m very conscious of that responsibility to make that collective voice heard. It’s unique to do that as a Black woman.’ 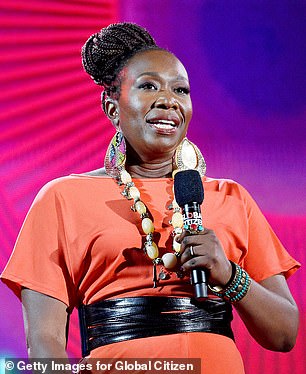 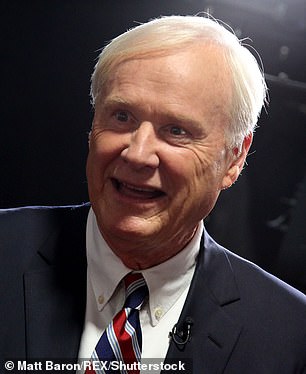 Reid’s (left) new evening show will take over the 7pm hour from Chris Matthews (right), after he resigned over allegations of sexist behavior

In recent weeks, space for Black and other marginalized groups’ voices have expanded in mainstream media since the death of George Floyd and other Black Americans at the hands of law enforcement.

A series of protests fighting racial injustice and police brutality has shone a bright light on the cracks in America’s foundation and several companies have made efforts to correct course.

One week later the Editor-in-Chief of Variety, Claudie Eller, took a two month leave after dismissing a minority reporter who called her out for a lack of diversity in the newsroom.

MSNBC executives are reportedly hopeful that Reid will attract a younger audience to the 7pm time slot, where Chris Matthews ratings struggled behind CNN and Fox News.

Unlike her predecessor, Reid has made a successful foray into social media where she actively engages with both her supporters and critics. The Twitter hashtag #reiders on Thursday was overwhelmed with congratulatory posts for Reid. 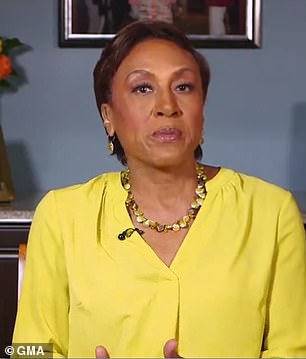 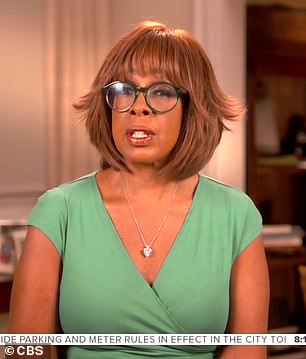 A number of Black woman host morning or daily news shows, including Robin Roberts of ABC News and Gayle King of CBS News (left to right), but none currently anchor an evening show

In a September 2019 tweet, Reid wrote: ‘Donald Trump has turned the presidency into a travel agency servicing the Trump Organization and its properties and golf clubs around the world.

‘He’s grabbing money constantly, from political sources domestic and foreign. How can that blatant kleptocracy be allowed to stand?’

The daughter of immigrants, Reid has continually pushed back at Trump and said the president ‘doesn’t actually embody any of the values he’s harkening back to.’

Reid has also been regarded for her astute analysis of race and class systems in the US, including authoring a book titled ‘Fracture: Barack Obama, the Clintons, and the Racial Divide.’

But her foundation briefly cracked in 2017 when a series of controversial posts on her blog ‘The Reid Report’, that she ran in the mid to late 2000s, resurfaced on social media

The posts contained homophobic content and in one post claimed Charlie Crist, a former Florida governor, was gay.

She allegedly admitted in one post that she didn’t see the blockbuster film Broke Back Mountain because ‘I didn’t want to watch the two male characters have sex.’

‘Does that make me a homophobic? Probably…but part of the intrinsic nature of ‘straigtness’ is the idea of homosexual sex…is…well…gross.’

Another post called actress Rosie O’Donnell a ‘chubbed-out shrew’ and wondered when her ‘fat a** gets canned by [Barbara Walters.].

Reid initially claimed the blog posts were fabricated and placed into her archives by hackers hoping to hurt her reputation.

She hired a cybersecurity team to investigate, but admitted in  an April 2018 apology letter that there was little evidence to suggest the posts were fake.

‘I genuinely do not believe I wrote those hateful things because they are completely alien to me,’ she wrote.

She added that she grew up ‘in a household that, like many in America, had conservative views on L.G.B.T.Q. issues.’ 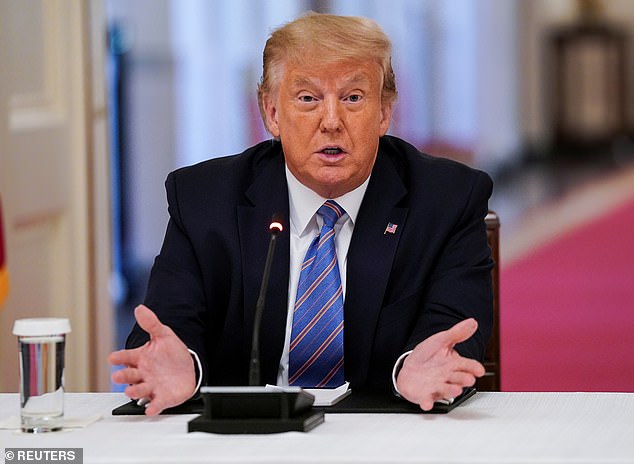 President Trump (pictured) has been a frequent target of Reid, who has criticized him for turning the presidency into a  ‘travel agency servicing the Trump Organization’

‘The person I am now is not the person I was then,’ said Reid, whose daughter identifies as gay.

When asked if she still believed the posts were fabricated, she told The New York Times that she doesn’t spend much time dwelling on it.

‘It’s two years ago, so I don’t spend a whole lot of time thinking about that old blog,’ said Reid.

‘What I genuinely believe is that I truly care about the L.G.B.T. people in my own life. I care about being a good ally, a good person, and making sure that my voice is authentic, that I can make a difference.’

Reid added that incident was ‘a pretty rough experience’ and that she sought out discussions with friends and colleagues afterwards.

‘My job in that moment was to listen.The L.G.B.T. community in this country has a resiliency and a core kindness.’

MSNBC host Rachel Maddow said Reid reached out to her directly to apologize for the offensive posts.

‘We judge people on their judgment, but also on their capacity to grow and correct,’ Maddow said in 2018.

‘She also reached out to me personally and directly, in case, as a gay colleague, I had been hurt personally by what had arisen at the time. And that was a stand-up thing to do, and something I won’t forget.’

NBC News has vowed to prioritize diversity in its newsroom despite past struggles with representation.

In 2016, former MSNBC host Melissa Harris-Perry left he the network after she reported feeling sidelined.

‘I am not a token, mammy or little brown bobble head,’ wrote Harris-Perry, who is Black, in an email to colleagues at the time.

Tamron Hall,  formerly at MSNBC and NBC’s Today Show, left the show in 2017 after he contract expired.

She was briefly replaced by former Fox News host Megyn Helly in the 9am slot. 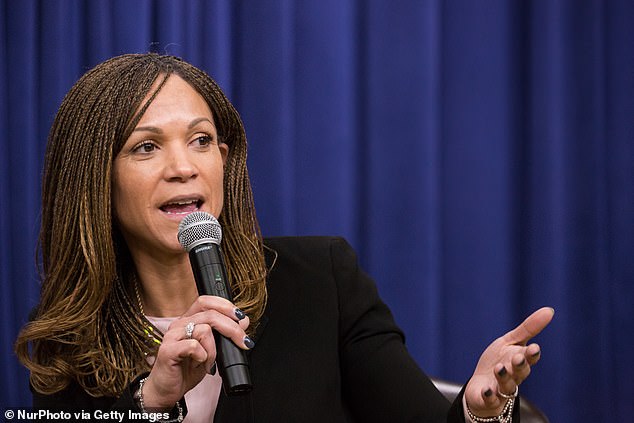 Former MSNBC host Melissa Harris-Perry left the network in 2016 and wrote in a letter to colleagues ‘I am not a token, mammy or little brown bobble head’

In an interview, Maddow told The New York Times that Reid’s promotion ‘feels like such a good decision by the network.

‘But particularly in prime time, it’s just a desert. Joy more than deserves this time slot and this kind of national platform.’

It’s likely that Reid’s replacement of Matthews will tilt the 7pm hour on MSNBC further left. Matthew was a political moderate who heralded the bipartisan friendship between Republican President Ronald Regan and  Thomas P. O’Neill Jr., the former Democratic speaker of the House.

But his opinions fell outside the normal characteristics of modern political news cable shows.

He was forced to apologize in February after comparing Senator Bernie Sanders’ successful Nevada caucus victory to the Nazi Germany takeover of France during World War II. 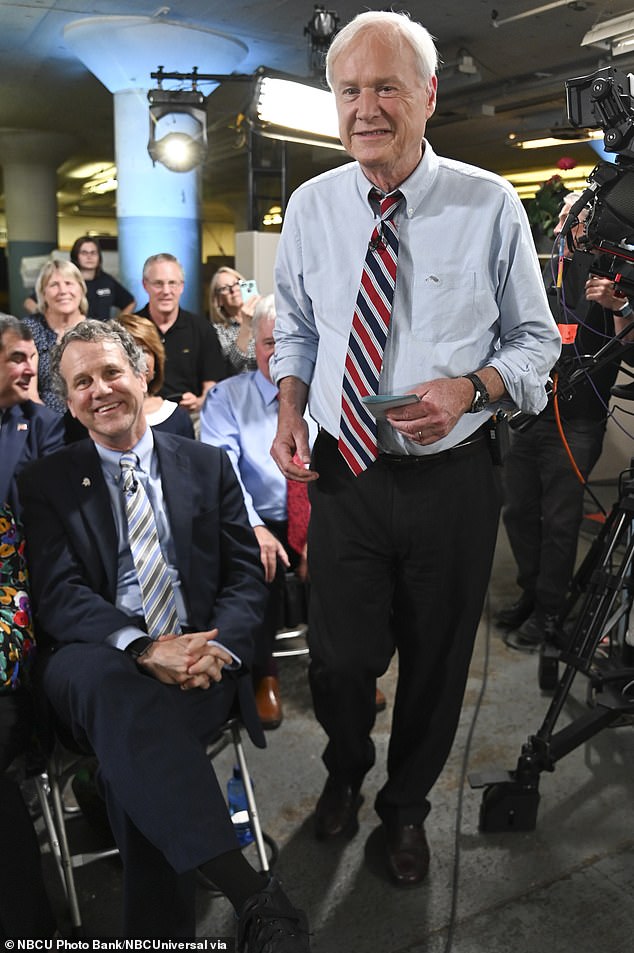 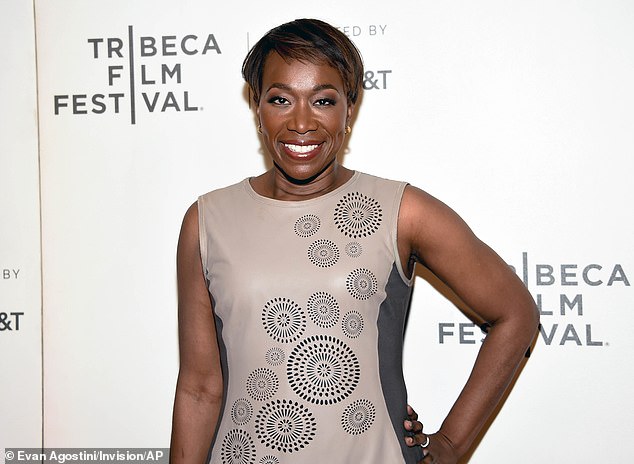 Reid (pictured): ‘I am also a journalist who can conceptualize that pain from a unique point of view. Every day I’m in this job, I’m very conscious of that responsibility to make that collective voice heard’

Reid was born in Brooklyn, New York, to immigrant parents from before growing up in Denver, Colorado.

Her mother was a professor and nutritionist from Guyana; Her father left for the Democratic Republic of Congo when she was a child.

‘He was a phone father,’ she told The New York Times.

At 17, she was accepted into Harvard University but took a year off after her mother died of breast cancer three weeks before school started.

Feeling ‘depressed,’ Reid returned to Brooklyn and worked a temp job at Columbia Pictures – prompting her to major in documentary filmmaking.

‘I was thinking Hollywood movies. Come to find out Harvard doesn’t do that. So I had to study documentary,’ she said.

Her love of politics sent her to Florida in the late 1990s, where she wrote for a local TV morning show and a column for The Miami Herald. In 2008, she took time away from journalism to sit on Barack Obama’s first presidential campaign.

Reid would later become managing editor of TheGrio.com, a news site geared from Black readers, before transitioning to MSNBC as contributor in 2011.

In 2014, she hosted the short-lived ‘The Reid Report’ daily talk show. Once cancelled, she stayed on the network as a correspondent.