Joy Villa claims spanking a man’s butt was a joke

A pro-Trump singer who filed a sexual assault claim against Trump’s former campaign manager, Corey Lewandowski because he ‘slapped her a**’ at a holiday party, has done the same thing herself.

Joy Villa, who wore a ‘Make America Great Again’ gown at the Grammys this year, was filmed drinking in Las Vegas with Nevada brothel owner Dennis Hof and Republican congressional candidate Omar Navarro, as she made several controversial comments.

Villa jokes with her friend about political correctness, declaring that she isn’t ‘afraid to say grab them by the p***y’ before adding that she doesn’t care if she is being filmed because she isn’t ‘too drunk’.

She bellows out, ‘shameless Republicans in the house’ then smirks at the camera before spanking an unaware tequila entrepreneur’s butt.

The man, George Harris, who said the slap was not consensual, told DailyMail.com: ‘Yeah, I was the one who got their butt smacked by Joy Villa.’

The full video was obtained by DailyMail.com after a low-quality section of it surfaced on social media.

The unearthed video surfaced after Villa’s Tuesday announcement that she had filed a sexual assault complaint against Lewandowski, 44, because he ‘slapped her a**’ at a holiday party in November. 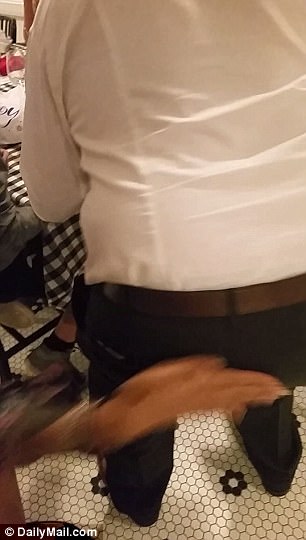 Singer Joy Villa appears in a newly surfaced undated video spanking the behind of George Harris (pictured right). Villa, who wore a ‘Make America Great Again’ gown at the Grammys this year, also joked in the video that she isn’t ‘afraid to say grab them by the p***y’ 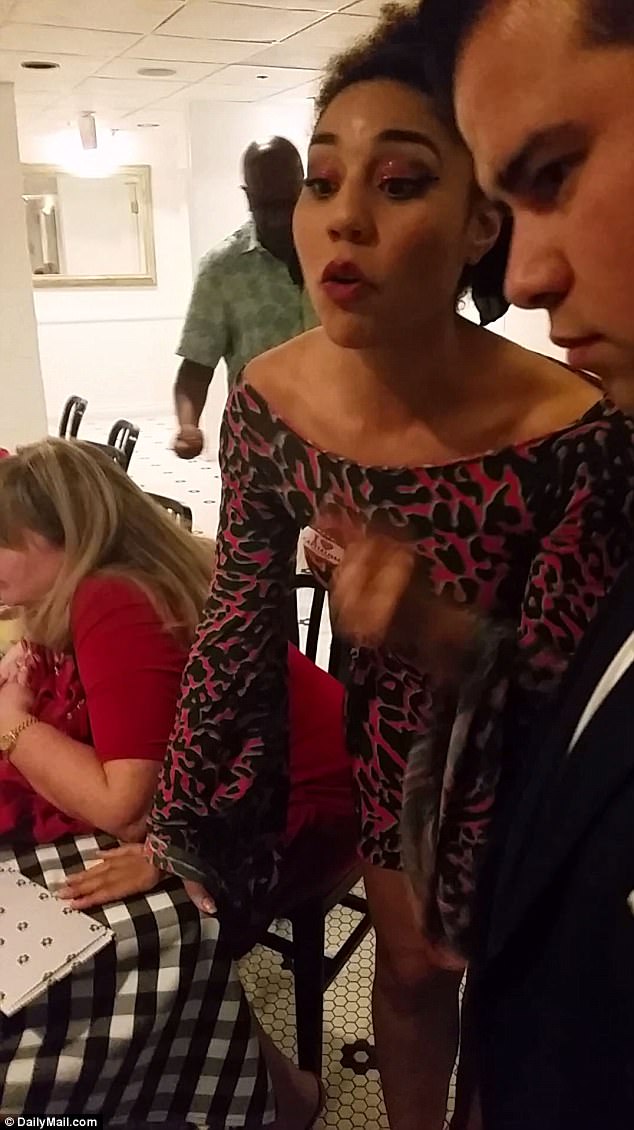 Villa jokes with her friend about political correctness, declaring that she isn’t ‘afraid to say grab them by the p***y’ and adds that she doesn’t care if she is being filmed because she isn’t ‘too drunk’

The video is undated but was taken after February this year, as she discusses an appearance on Fox Business Network’s Mornings With Maria that month in which she was interviewed about her Make America Great Again dress which she wore to the Grammies.

On Good Morning America on Friday, Villa addressed the video, claiming it was ‘just a joke’.

At the start of the four-minute clip, Villa is seen wearing an ‘I [heart] capitalism’ pin and chimes in on an ongoing conversation.

Villa asks again if her friend is recording her and whether if she is live-streaming their conversation. She then shrugs it off, saying: ‘I don’t care … I’m not too drunk’.

The singer then backs up and dramatically motions that she is going to slap Harris on his behind, before giving him a firm slap on his butt.

She cheers afterwards but Harris tells her to ‘take it easy’, before she starts loudly laughing again.

On Friday morning Villa appeared on ABC’s Good Morning American and said: ‘Well, for one thing, he didn’t say stop or no. And when he said take it easy, I was being stupid. It was at a party in Las Vegas and I did stop.’ 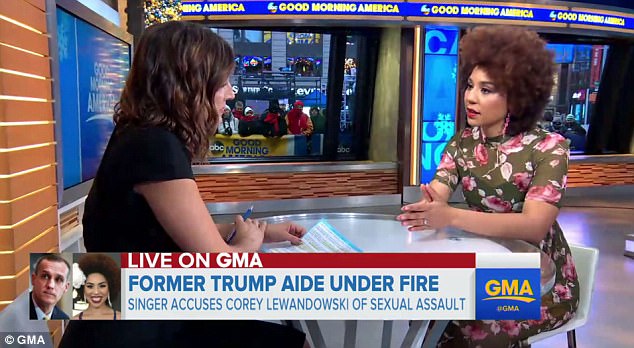 On Good Morning America on Friday, Villa addressed the video, claiming it was ‘just a joke’

She continued: ‘And if I offended George, you know, I totally apologize and I made it clear I reached out to his best friend and talked it over and said, listen, if this offended you, I’m sorry. I own up to it.

‘That’s wrong and that’s what we have to do to make sure we have a safe environment. We have to say I’m sorry. If he had said no I definitely wouldn’t have gone and done it again. When he said take it easy, I stopped. It was a joke.’

Villa did not respond to DailyMail.com’s request for comment.

Later in the video, Villa begins a conversation with brothel owner and millionaire Dennis Hof, 71, who asks for a picture with her.

Hof owns the brothel that former NBA player Lamar Odom was found unconscious at in 2015. OJ Simpson is also reported to have visited one of Hof’s businesses after his prison release.

While Villa and Hof pose together, someone off-camera makes an apparent reference to Vill and tells them: ‘I will translate for you, “I’m 70 and I’m going to bang a 14-year-old’ before correcting himself and adding ‘not 14 but 28″‘.

On Tuesday, Villa filed her complaint against Lewandowski. She said she was initially reluctant to come forward because she was worried about any backlash.

However, she decided to call Washington’s Metropolitan Police Department on Christmas Eve after a friend who witnessed the incident spoke about it publicly and other friends urged her to come forward.

‘I didn’t know him at all,’ Villa said about Lewandowski.  ‘I only knew him by reputation. He broke my trust.’ 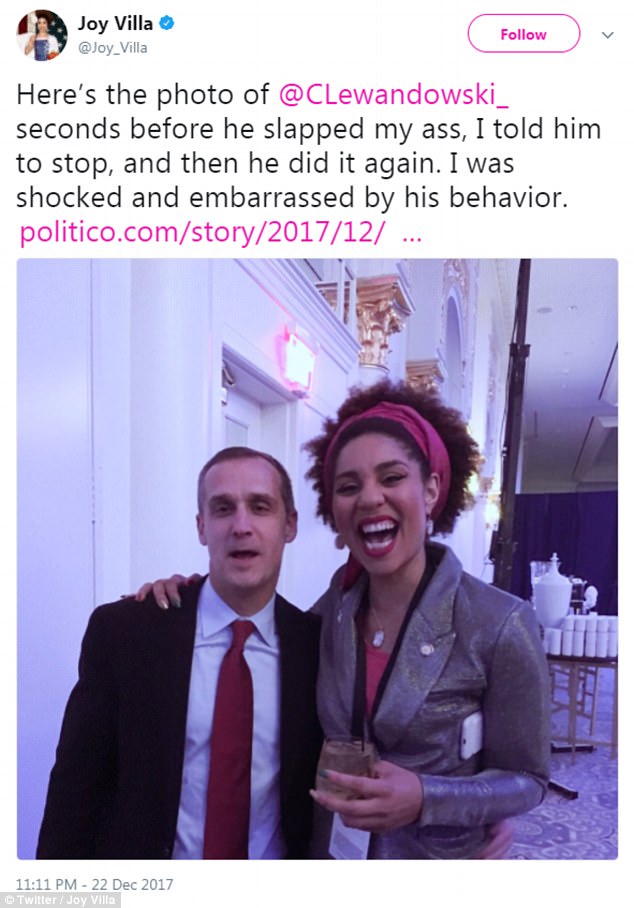 Villa said the incident with Lewandowski happened right after this photo was taken. She said she was initially reluctant to come forward because she was worried about any backlash 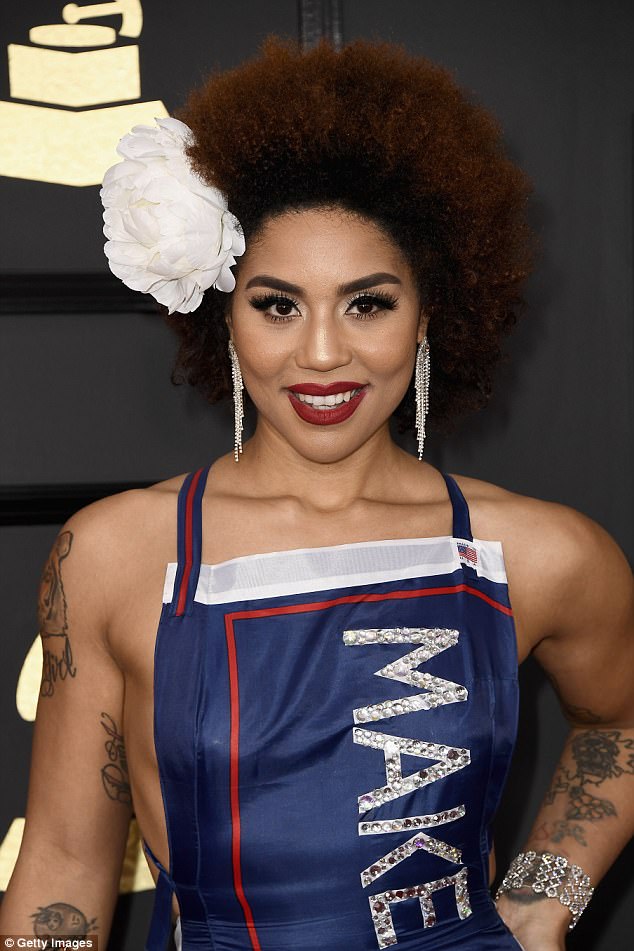 Villa said she saw him at a gathering at the Trump International Hotel on the day after Thanksgiving, and said Lewandowski struck her ‘extremely hard’ even after she told him to stop.

‘I’m wearing this silver suit and stretchy pants, and after the photo, he smacks my a** really hard,’ Villa told Politico. ‘It was completely demeaning and shocking.’

Villa said she told Lewandowski ‘half-joking’ that she could report him for sexual harassment.

‘He said: “Go ahead, I work in the private sector”,’ Villa told Politico. She added that she felt it was ‘disgusting and shocking and demeaning.’

Villa, who is considering a run for a Florida congressional seat, said she initially thought it was sexual harassment, but police told her that touching someone on any body part that is sexual in nature constituted sexual assault.

She said she was told it was classified as a misdemeanor.

‘I was initially fearful to come forward with this,’ Villa said, adding that she did not want to bring shame or embarrassment on Lewandowski’s family or hers.

‘I did nothing wrong,’ Villa said. ‘I realized if he’s not going to respond or apologize to me, I think it’s the right thing to do.’

Villa made news earlier this year when she wore a dress displaying Trump’s campaign slogan at the Grammys. 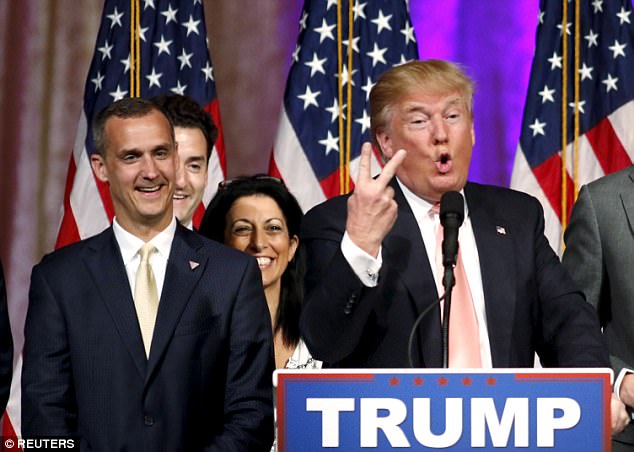 Villa references Trump commenting, ‘when you’re a star, they let you do it, you can do anything… grab them by the p***y’. Pictured: Trump with Lewandowski last March 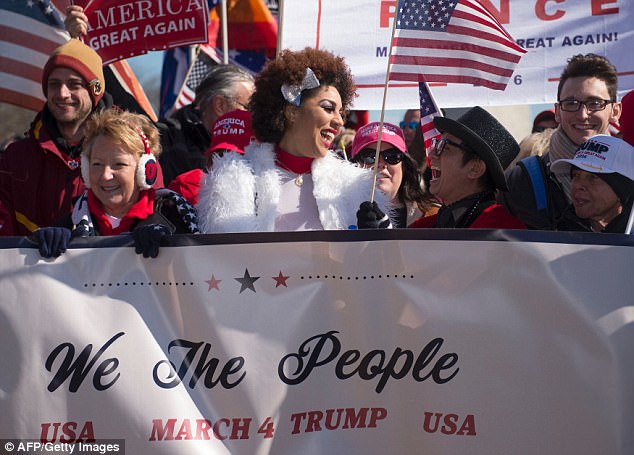 Villa, who is considering a run for a Florida congressional seat, said she initially thought it was sexual harassment, but police told her that touching someone on any body part that is sexual in nature constituted sexual assault

Villa explained her decision to wear the dress in an Instagram post, writing, ‘You can either stand for what you believe in or fall for what you don’t. Agree to disagree.’

In a statement to ABC News, Lewandowski said: ‘What I’m going to do is let the process play forward just as you did when you were accused of sexual harassment in your own case.’

Meanwhile, this is not the first time Lewandowski has faced police charges.

In March 2016 he was charged with misdemeanor battery for an altercation involving a female reporter after a news conference in Florida. The charges were later dropped.

Trump fired him as campaign manager in June 2016.

He has since written a book about the President, titled ‘Let Trump be Trump!,’ in which he talks about being on the campaign trail with the now president.

Lewandowski is the individual who divulged that every day on the trail the president would have a meal of two Big Macs, two Filet-o-Fish’s and a milkshake from McDonald’s.

Lewandowski, who served as Trump’s first campaign manager, was fired ahead of the Republican National Convention in 2016, after several divisive comments and concerns about the campaign being led by someone with no experience managing a presidential race.