Antonio Conte has admitted Inter Milan may finally clinch Serie A glory this season – but quickly warned his players that the enthralling title race is far from over.

Romelu Lukaku netted late on to steer the table toppers to another crucial three points, this time against Bologna, as Inter’s winning streak stretched to nine games.

The only other Inter coach to have matched that formidable record was Roberto Mancini in 2007, during a campaign when Inter also managed to win the trophy.

It proved a fine weekend for the team in pole position after city rivals AC Milan and Juventus were both forced to settle for a point each.

The results meant that Inter pulled eight points clear at the summit and also play their game in hand against Sassuolo on Wednesday.

And when questioned about his side’s chances of remaining in top spot after the win against Bologna, Conte was unable to hide a grin. 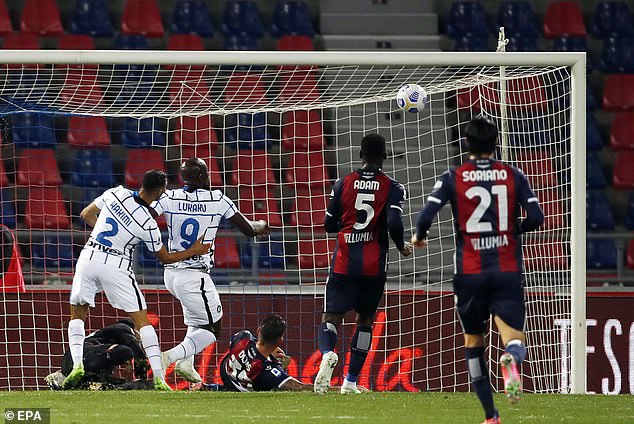 ‘I do think we’ve created something wonderful between the players and staff,’ Conte said post-match.

‘They all know I am consistent, that I don’t treat people differently because of their name. I make choices for the good of Inter.

‘That respect has now developed between us all, there is a symbiosis, but we’ve got to keep it going to the end.

‘It would be marvellous to end a season that has not been easy for anyone by crowning it with a trophy. 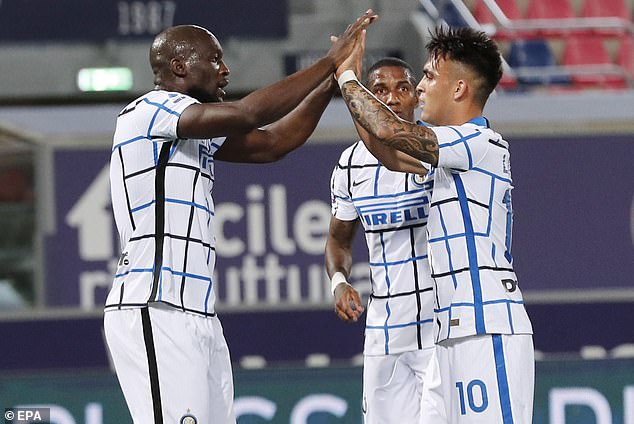 ‘We went close last season with the Europa League Final, but this time… we might get there.’

Conte was seen on the touchline embracing director Lele Oriali after the final whistle – and raucous dressing room celebrations were also heard.

But the Inter boss was keen to stress that the party atmosphere, despite its jubilant nature, was not because his stars believe they have already clinched the silverware.

‘No, it cannot be a Scudetto celebration, because we have to earn that on the pitch and it needs to be mathematically certain,’ he added. 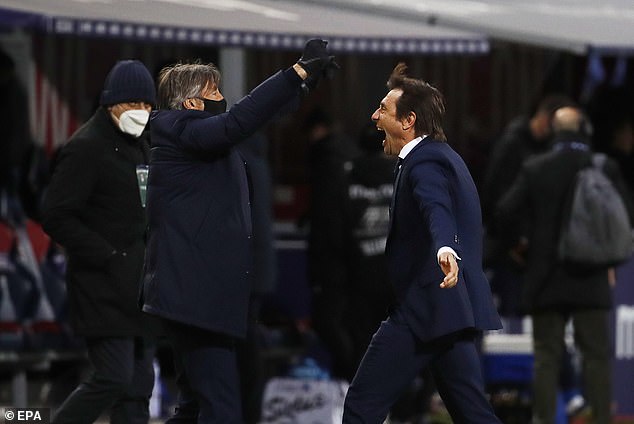 ‘We know full well that Serie A is very difficult and every match is a battle to get the victory.

‘The closer to we get to the finish line, the clearer we can see the prize at the end.

‘Everyone is looking at that direction and we see it from a different angle to the others right now, but we still have it all to do. We’ve achieved nothing yet.’