‘That was like something out of a sitcom’: Judd Trump tricks referee to look away while he cheekily moves ball after being snookered in his World Championship quarter-final with Stuart Bingham at the Crucible

Judd Trump drew a laugh out of the Crucible crowd after tricking the referee to look away while he moved a pink ball to avoid being snookered.

Trailing Stuart Bingham by two frames, Trump was able to find his sense of humour as he reduced the deficit to one.

Trump, who won the 2019 edition of the worlds, had snookered himself in search of a century-break with the brown as his next ball.

Noticing somebody coughing, Trump took the opportunity to distract the referee

With a fan coughing in the background as Trump considered his options, he appeared to use that as leverage with the referee Ben Williams to distract him.

As Williams momentarily turned away to look for what Trump had cheekily pointed at, the Englishman nudged the pink ball out of the way with his cue. Having moved the ball that previously blocked his access to the brown, he took his shot.

Eurosport commentator David Hendon found the incident hilarious, noting that Trump had found his sense of humour again as he closed in on Bingham for a place in the semi-finals. 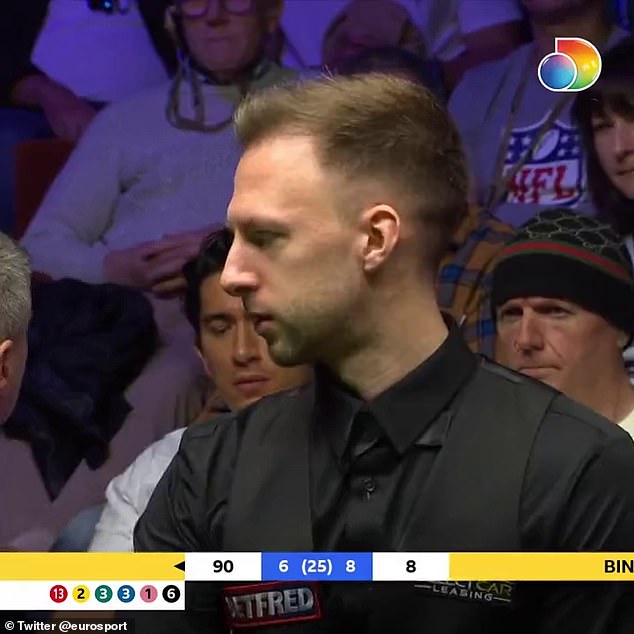 When the referee turned around to look at where the player had pointed, Trump nudged the pink ball out of the way

With Trump having trailed 8-3 at one stage in the quarter-final between the two former world champions, with Bingham having reeled off five consecutive frames, the 2019 winner’s actions appeared to be indicative of him having got his mojo back, Hendon suggested.

‘Thing’s are turning round maybe for Trump, he’s enjoying it suddenly. He takes [frame] seven,’ he said as Trump returned to his chair with a grin etched across his face. 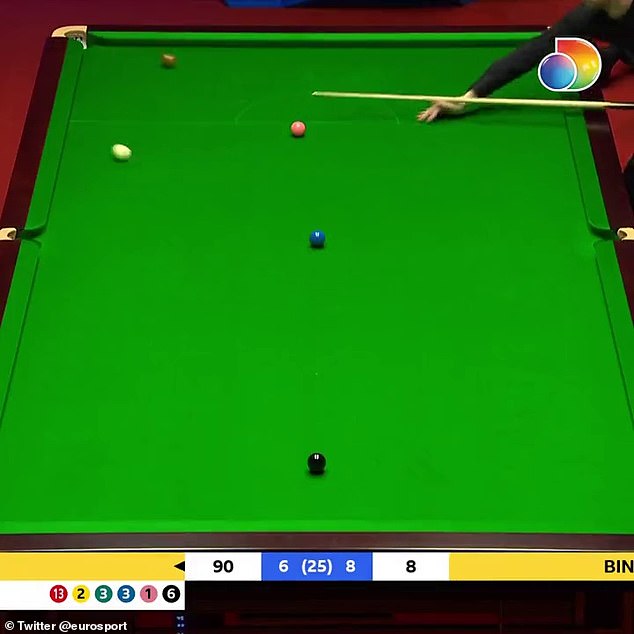 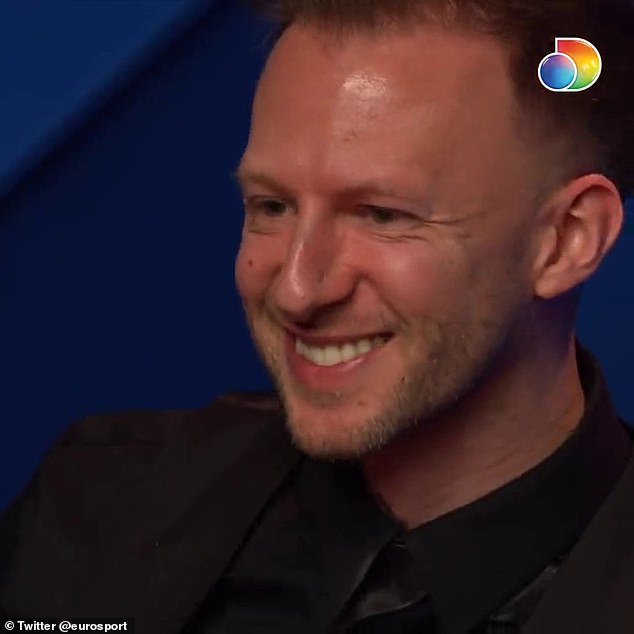 Trump, who said afterwards that he was not enjoying his snooker, appeared to find enjoyment in the moment that greatly amused the Crucible crowd

Hendon then likened the funny moment to something out of a sitcom.

He said: ‘Well, that was like something out of a sitcom.’

Trump went on to win the next frame to finish the session level with Bingham, ensuring a potentially classic finish to the quarter-final between two of snooker’s heavyweights.

Trump said after the session that he was not enjoying his snooker currently, and the moment provided a bit of light relief from the trials and tribulations of the sport.

He said: ‘My main aim in snooker always is to enjoy it, and at the moment I am not.

‘So whether I have to start missing more events or even do what Ronnie did and miss a season out, I don’t know.’

Elsewhere, six-time world champion Ronnie O’Sullivan booked his place in the final four with a 13-5 victory over Stephen Maguire.

The winner of Trump against Bingham will face Mark Williams in the semi-final, he beat Yan Bingtao 13-11.

O’Sullivan will face one of Jack Lisowski or John Higgins.