Judge allows poisoned spy’s blood to be taken for testing

The police officer who was in critical condition after the Salisbury poisoning has been discharged from hospital as doctors were granted permission to take blood samples from the unconscious Sergei Skripal and daughter Yulia.

Detective Sergeant Nick Bailey, who was rushed to hospital following the incident, has been released after being critically ill following his exposure to a nerve agent.

Chief executive of Salisbury NHS Foundation Trust Cara Charles-Barks said today that DS Bailey was discharged this afternoon, but insisted that for ‘reasons of patient confidentiality’ there would be no discussion of his condition.

She also said 48 other people sought advice from the hospital after the nerve agent attack and have been assessed and given advice.

Meanwhile senior judge Mr Justice Williams today made a key ruling in the Court of Protection allowing medics to take blood samples without having the consent of the unconscious former double agent and his daughter.

Giving his ruling, Mr Justice Williams said an unidentified consultant who is treating the Skripals said they were both heavily sedated, unable to communicate and that it was not possible to say when or to what extent either may regain mental capacity.

They were both in a physically stable condition and were being treated ‘on the basis they would wish to be kept alive’, the consultant said, according to Williams’ ruling at the London’s Court of Protection, which makes decision over the welfare of people who are unable to do so themselves.

‘The precise effect of their exposure on their long term health remains unclear albeit medical tests indicate that their mental capacity might be compromised to an unknown and so far unascertained degree,’ Williams said in his judgement.

The judge, who is based in the Family Division of the High Court in London, announced his decision today after analysing the case at a private hearing earlier this week.

He said trust bosses could also provide copies of medical notes to the OPCW.

The judge said he had concluded that such moves were in the best interests of Mr and Ms Skripal. 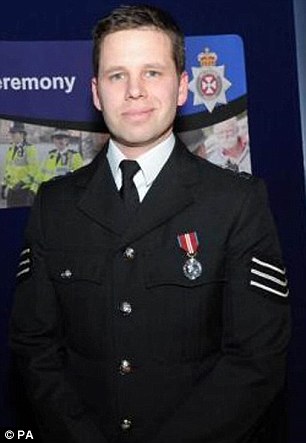 Detective Sergeant Nick Bailey (pictured), who was rushed to hospital following the incident, is now stable after being critically ill

The ruling came as it emerged a second police officer who was investigating the Salisbury nerve agent attack is being treated in hospital for suspected poisoning.

The uniformed PC is understood to have developed minor symptoms, including skin irritation, and is receiving treatment as an outpatient.

He is said to have come into contact with an object that possibly had ‘secondary contamination’.

A source told MailOnline: ‘The second officer is showing potential signs of poisoning but they are very minor and not at all on the same scale as DS Bailey and the Skripals.

‘At this stage it is unclear how he became ill but it is possible that he came into contact accidentally with an object that could have had some secondary contamination.

‘He is receiving treatment at Salisbury General Hospital as an outpatient as his symptoms are not serious enough to warrant him being kept in.’ 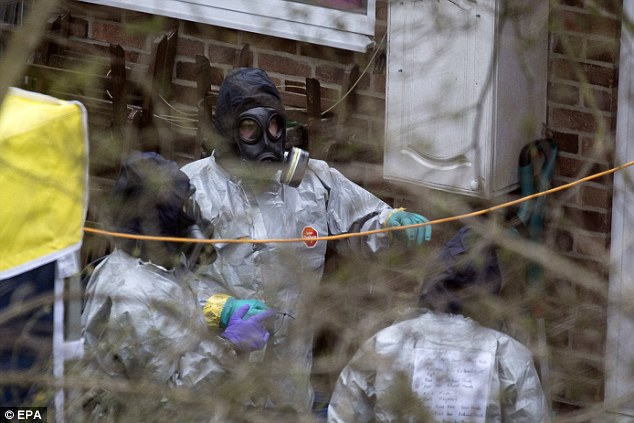 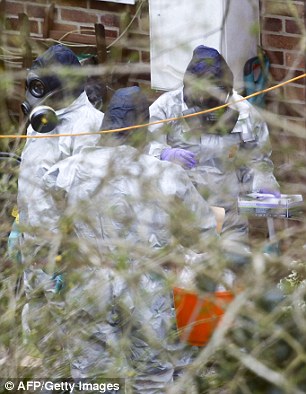 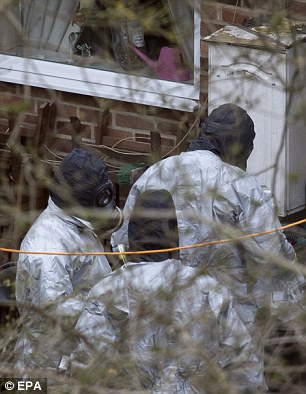 Skripal, 66 and his 33-year-old daughter were found slumped on a bench in Salisbury, Wilsthire on March 4 after they had gone out for a drink and a meal at an Italian restaurant.

They had been exposed to a powerful nerve agent developed in Russia called Novichok. The Russian government has been blamed for the attack.

Intelligence officials in the US believe they were possibly exposed to the nerve agent though Skripal’s car ventilation system.

However, counter-terror officers from the Metropolitan Police, who are leading the investigation, are working on one strong line of inquiry that Yulia unwittingly brought over a contaminated item from Moscow.

They believe that item could have been opened at Skripal’s home.

The huge police operation is to continue in Salisbury for several months as officers comb through various sites across the city. 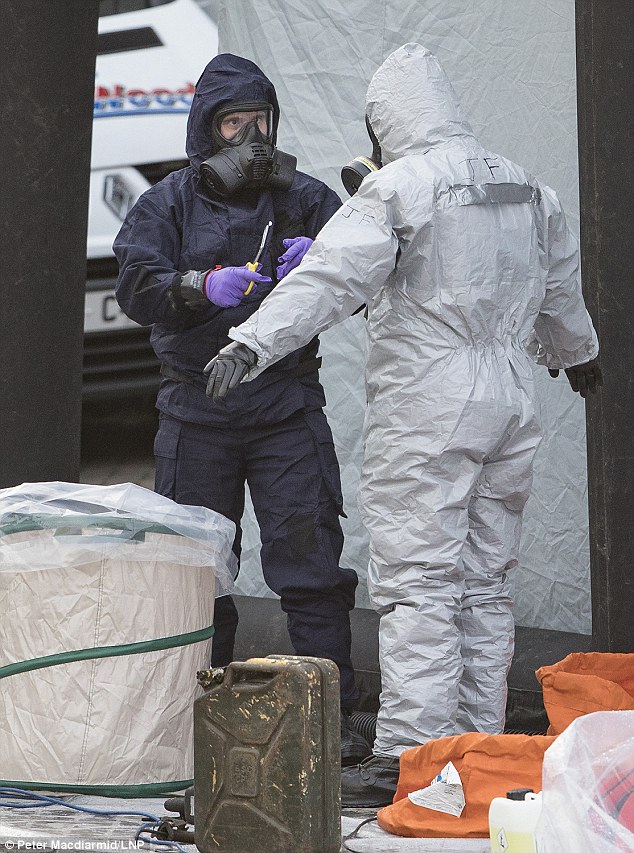 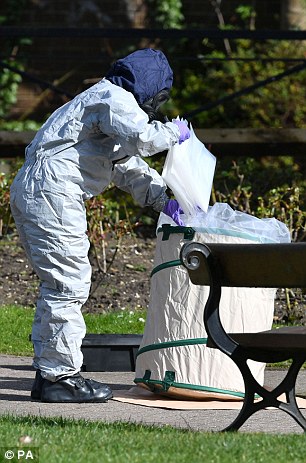 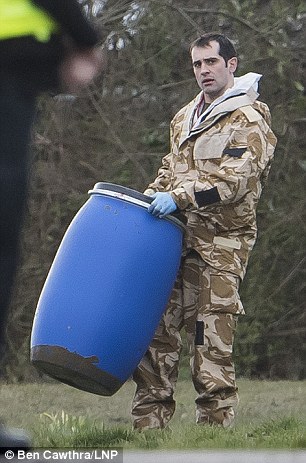 Police in protective suits at The Maltings shopping centre, where former Russian double agent Sergei Skripal and his daughter Yulia were found poisoned (left) and in Alderholt, British military personnel are seen carrying plastic drums as the investigation continues (right)

It has been reported that the vast scale of the investigation has meant that biochemical suits worn by terror officers are running low because they have to be removed every three hours and destroyed.

However, MailOnline understands that police are to appeal for a higher grade of suite that affords greater protection because of the presence of novichok.

The source said: ‘The suits worn by police at the moment are fine for the investigations they are used to like raiding drug laboratories or handling more basic chemicals used by suspected terrorists.

‘Novichoc, however, is a level up from what they are used to. This is a seriously dangerous nerve agent most likely made in a state-run laboratory somewhere in Russia.

‘As a result police chiefs are going to request a higher spec of biochemical suit, more like the ones used by the military, to be given to those officers in Salisbury to give them greater protection.’ Counter-terror officers from the Metropolitan Police, who are leading the probe, are working on one line of inquiry that Yulia unwittingly brought over a contaminated item from Moscow

The clean-up in Salisbury will also take several months because novichok was designed specifically to avoid detection by chemical weapons inspectors.

It cannot be identified via hand-held chemical detection equipment or spray solutions normally used by the police to check if a toxic chemical is present.

Forensic teams will have to instead painstakingly swab every surface in areas of potential contamination before the public are allowed back.

Several cordons have sprung up across the city of Salisbury in Wiltshire after Skripal and Yulia were poisoned on March 4.

Sites of interest include The Mill pub, a branch of Italian chain restaurant Zizzi, Skripal’s home and the cemetery where his wife and son have been buried. 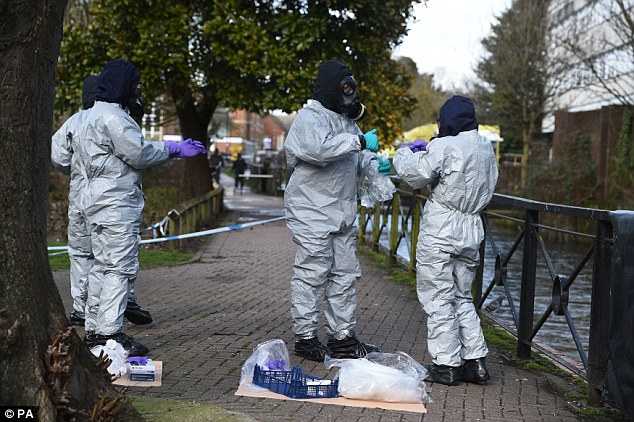 There are also fears that stocks of bio-chemical suits used by the police are getting low and they may have to call upon the military for help.

The source added: ‘Novichok was developed by scientists especially to evade detection from weapons inspectors.

‘That means that detectors carried by police to protect them from chemical and industrial toxic agents in drug and terror operations will be useless in this case.

‘So too is the spray solution officers use which changes colour to indicate the presence of a harmful chemical.

‘The only way the police can make sure an area of potential contamination does not pose a residual risk to the public is by swabbing every surface.

‘Given the extent of this operation, the number of potentially contaminated sites that have been sealed off, it is likely to be a very thorough process that could take several months.

‘Clearly senior officers will be aware of the impact this will have on business and commerce in Salisbury as well as the disruption to shoppers and they will work to prioritise sites.

‘The problem is that Chemical, Biological, Radiological and Nuclear (CBRN) incidents are typically used to one site which takes a few days to assess. 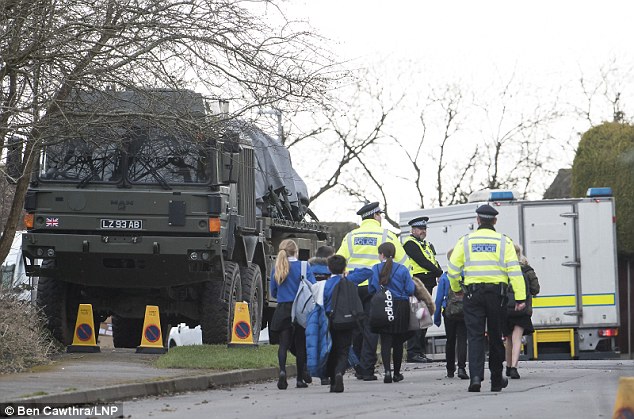 ‘On this occasion there are several sites which are taking many days to investigate, so much so that stocks of bio-chemical suits used by the police are in danger of running low.

‘In that incidence, either the military will have to take over or the police forensics teams will have to use their suits.’

Traders in Salisbury have reported significant losses because shoppers are too scared to come into the city centre.

Daniel Styles, who runs a popular flower stall, told Spire FM how he had been left £9,000 down over the Mother’s Day weekend.

He told the local radio station: ‘It’s normally one of the biggest weekends of the year for us, we make quite a large amount of money that carries us through the year.