The California judge who was removed from the bench by voters angry over his lenient sentence to a convicted rapist is asking supporters to help pay off his legal bills.

In June, Aaron Persky became the first California judge to lose his position on the bench in a judicial recall in almost 90 years.

Now he says that the campaign to challenge the recall, which he eventually lost, has forced him into debt, according to San Jose Inside.

‘I am writing to thank you for your support during the recall campaign, and to ask you to contribute to defray $135,000 in court-ordered attorney fees arising from the recall,’ Persky wrote in an email he sent to supporters on Tuesday.

In June, Aaron Persky became the first California judge to lose his position on the bench in a judicial recall in almost 90 years. Persky is seen above in San Jose on May 30, 2018 – days before he would lose the recall

‘On June 5, 2018, I was recalled by voters after a well-funded, misleading, and extremely negative campaign by recall proponents.

‘My campaign, which stressed the vital importance of an independent judiciary, received broad support from the legal community in Santa Clara County and beyond.’

Persky, 56, said he has until the end of December to pay off all of his debts.

He lost the recall campaign, with more than 60 per cent of Santa Clara County voters supporting his removal.

He managed to raise $840,000 for the recall campaign, which he was unable to block in court.

Persky says his legal debts were the result of a lawsuit he filed asking the California Secretary of State to preside over the recall. But a lower court rejected his claim.

The former Santa Clara County Superior Court judge became the object of scorn across the nation in early June 2016.

Persky sentenced Brock Turner, a swimmer at Stanford University, to six months in a local jail and three years probation after he was convicted of sexual assault charges.

Turner was arrested in January 2015 after he was found behind a dumpster on the Stanford campus sexually assaulting an unconscious woman.

While prosecutors recommended a six-year prison sentence, probation officials in Santa Clara County believed a ‘moderate’ county jail sentence was appropriate given Turner’s lack of a criminal record, youth, and expression of remorse.

Persky agreed with the probation officials and handed down the more lenient sentence, sparking outrage.

Michele Dauber, a Stanford professor who knew Turner’s victim, launched a public campaign that eventually ended in the judge’s recall.

Dauber was quoted as saying on Tuesday that she had no sympathy for Persky’s financial predicament.

‘Judge Persky made the bad decision to repeatedly file frivolous lawsuits and appeals with the goal of stalling and causing expense,’ she wrote in an email to San Jose Inside.

‘The court has concluded that he should be required to pay for that decision, and we are happy that our lawyer will be getting paid for his outstanding work in defending our constitutional rights, and those of the voters of Santa Clara County.’ 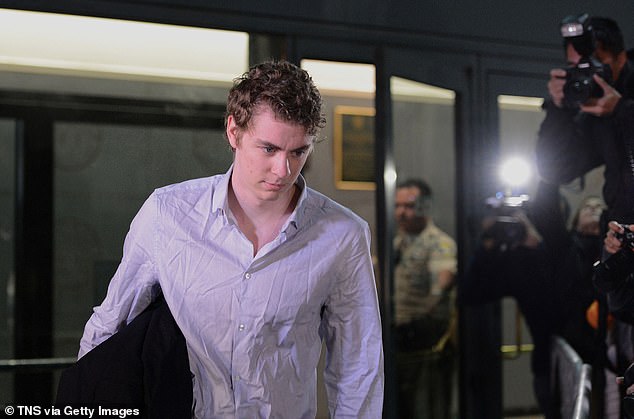 The Santa Clara County Superior Court judge became the object of scorn across the nation in early June 2016. Persky sentenced Brock Turner (above), a swimmer at Stanford, to six months in a local jail and three years probation after he was convicted of sexual assault charges

The case ignited a national debate over the criminal justice system’s treatment of sexual assault victims and racial inequities in court.

Persky is white and holds undergraduate degrees from Stanford and a law degree from the University of California, Berkeley.

Many complained Persky showed too much deference to Turner, a white Stanford scholarship athlete whose parents could afford a private attorney.

Activists pointed to numerous other cases in which minorities faced much harsher sentences for less egregious crimes.

The victim, who came to be known as Emily Doe, testified she was passed out behind a trash can when two men saw Turner on top of her.

The two men, Swedish graduate students, yelled at Turner to stop and then chased him and held him down for police when tried to flee.

Persky said he took the victim’s experience into account when sentencing Turner.

But the judge said the publicity of Turner’s arrest and trial and the young man’s loss of a swimming scholarship also factored into his sentence.

Turner is also required to register for life as a sex offender.

‘I think you have to take the whole picture in terms of what impact imprisonment has on a specific individual’s life,’ Persky said during the sentencing hearing.