A federal judge on Thursday denied a bid for a new trial by President Donald Trump’s longtime friend and adviser Roger Stone after the veteran Republican operative accused the jury forewoman of being tainted by anti-Trump political bias.

US District Court Judge Amy Berman Jackson rejected Stone’s claim that the jury forewoman was biased against Trump and therefore could not be impartial in deciding Stone’s guilt or innocence during the trial.

The Republican president has assailed the judge and prosecutors in the case and has labeled the forewoman an ‘anti-Trump activist.’

Stone’s request for a new trial ‘is a tower of indignation, but at the end of the day, there is little of substance holding it up,’ Jackson said in an 81-page decision.

Roger Stone (center), a friend and adviser to President Trump, is seen above in Washington, DC, on February 20 after he was sentenced to 40 months in prison

Jackson sentenced Stone on February 20 to three years and four months in prison after a jury convicted him on November 15 on seven counts of obstruction of justice, witness tampering and lying to lawmakers investigating Russian interference in the 2016 US election.

Stone was convicted of lying to a House of Representative committee about his attempts to contact WikiLeaks, the website that released damaging emails about Hillary Clinton, Trump’s 2016 Democratic election rival, that US intelligence officials have concluded were stolen by Russian hackers.

With his motion for a new trial denied, Stone is expected to ask an appeals court to throw out his conviction.

During a February hearing, Stone’s lawyers presented social media posts by the jury forewoman that they said showed that her lack of impartiality deprived their client of a fair trial.

One of the juror’s posts at issue was a Twitter post on the day of Stone’s arrest that linked to an article about Mueller’s investigation along with the words ‘Brought to you by the lock her up peanut gallery,’ referring to ‘lock her up’ chants by Trump supporters in 2016 about Clinton.

Most of the juror’s posts were not about Stone, instead making reference either to Trump or Mueller’s inquiry, two common subjects of political discussion among Americans at the time they were written. 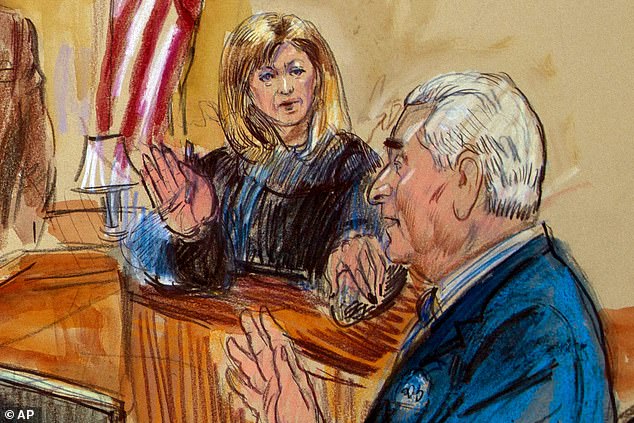 The jury forewoman made Twitter posts during the trial, but all were unrelated to the case.

Trump, who has not ruled out a pardon for Stone, posted a Twitter attack on the forewoman during the February hearing.

Jackson said in her decision that the juror’s opinions about Trump did not translate into bias against Stone.

‘The assumption underlying the motion – that one can infer from the juror’s opinions about the president that she could not fairly consider the evidence against the defendant—is not supported by any facts or data,’ she wrote.

ROGER STONE DID A LOT WRONG: WHAT HE WAS CONVICTED OF

Roger Stone was found guilty on all charges of:

1. Obstruction of justice, lying to Congress and witness tampering by trying to get Randy Credico to lie to Congress. Sentenced to 40 months

2. Lying to Congress that he did not have emails or texts about Julian Assange. Sentenced to 12 months concurrent with the first count

3. Lying when he claimed his references to being in touch with Assange were actually about a ‘go-between’ – Randy Credico. Sentenced to 12 months concurrent with the first count

4. Lying that he didn’t ask his ‘go-between’ to communicate with Assange. Sentenced to 12 months concurrent with the first count

5. Lying that he didn’t text or email the ‘go-between’ about WikiLeaks. Sentenced to 12 months concurrent with the first count

6. Lying that he had never discussed conversation with his ‘go-between’ with anyone in the Trump campaign. Sentenced to 12 months concurrent with the first count

The 40-month sentence handed down by the judge in February was far below the nine years demanded by the prosecution before that was overruled in a political tumult and furious tweets by Trump.

Trump sought to paint that as a win, but Berman Jackson, an Obama appointee, went out of her way to say she was not affected by the president. Stone himself had asked for probation.

‘This case did not arise because Roger Stone was being prosecuted by his political enemies,’ Berman Jackson said during his February sentencing.

She said Stone told ‘flat out lies,’ and that his conviction had nothing to do with whether Russia interfered in the 2016 election.

He was guilty of a ‘corrupt, unlawful,’ campaign to stop his lies being exposed when he threatened Randy Credico, who he named as his ‘go-between’ to Julian Assange, to stop Credico revealing the truth, that there was another go-between.

Stone was also guilty of withholding texts and emails from Congress, prompting Berman Jackson to again lash out at the president.

On February 20, Trump tweeted in rage against the prosecution accusing it of lacking ‘FAIRNESS’ as the hearing was under way in federal court in Washington D.C.

”They say Roger Stone lied to Congress.’ OH, I see, but so did Comey (and he also leaked classified information, for which almost everyone, other than Crooked Hillary Clinton, goes to jail for a long time), and so did Andy McCabe, who also lied to the FBI! FAIRNESS?’ the president tweeted. 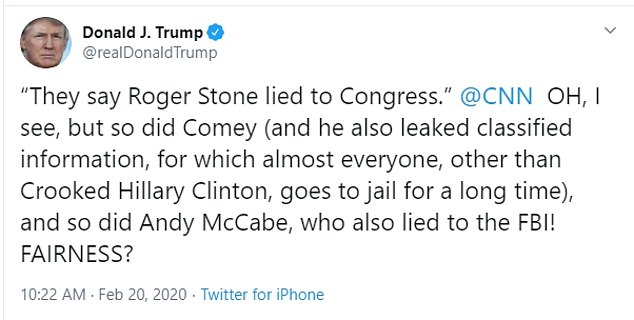 After Stone was sentenced, Trump criticized Stone’s conviction, fueling speculation he may pardon his friend

Department of Justice attorneys had originally requested a far harsher punishment of seven to nine years only to see their recommendation ripped up by Attorney General William Barr, who drew praise from Trump for labeling it ‘excessive and unwarranted’.

The intervention sparked accusations of political interference, forcing Barr on the defensive as he denied bowing to White House influence and appealed for Trump to curb his explosive Twitter criticisms of Judge Jackson and the supposedly ‘tainted’ case against Stone.

More than 2,000 former justice department employees have since signed a petition calling on the Attorney General to resign.

The original prosecution foursome of Aaron Zelinsky, Jonathan Kravis, Adam Jed and Michael Marando were replaced for today’s proceedings at Washington, D.C. District Court, having all resigned in protest.