A judge has today thrown out a case against five Extinction Rebellion protesters after a key police witness was allowed to go on holiday.

The five activists were accused of gluing themselves to the concourse between London City Airport and the DLR station in October last year.

Deputy District Judge Vincent McDade dismissed all charges at City of London Magistrates’ Court after an ‘abject failure’ by the Crown Prosecution Service.

Claudia Fisher, 57, Phoebe Valentine, 23, David Lambert, 60, Senan Clifford, 59, and John Burrage, 42, have all been cleared of aggravated trespass after the sit-in.

Their solicitor Maryam Mir, successfully argued they had not been lawfully arrested because the officers on duty had not made it clear why they were being detained.

The arresting officer had not been told by the CPS she was expected to attend the trial and so she could not be cross-examined by Ms Mir.

Following the Christmas celebrations, the officer had booked a holiday and was not available for court.

Deputy District Judge Vincent McDade said: ‘There has been an abject failure by the Crown Prosecution Service to ensure that this case has been properly managed.’

He said the police officer who was to appear for the prosecution was required from the outset.

‘Had the CPS acted efficiently and warned the witness as soon as possible after the case management hearing on November 7 this matter would proceed today with that witness giving live evidence,’ he said. 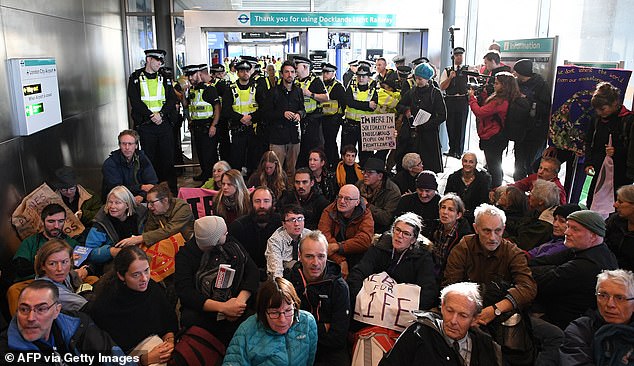 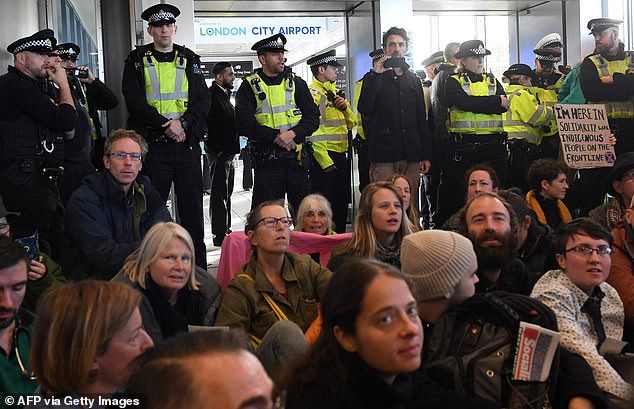 The judge said the police officer – the officer who carried out the arrests – was considered a ‘vital witness to establish the lawfulness or otherwise of the arrests’.

He said he had ‘no option but to dismiss all matters against the defendants’.

The judge also ordered train travel costs totalling £279.80 awarded to the five after the case against them collapsed.

Once the decision was announced in court Extinction Rebellion members clapped and cheered.

Ms Mir said: ‘It is only when you look at the body warn footage that you see there is an issue of lawfulness of arrest because it is not properly communicated.

‘The officer’s evidence is crucial. At three minutes 43 seconds there was an on-mass arrest. Then we see the PC goes around talking to certain individuals and even from her body warn footage you cannot hear her

‘We say she does not arrest Ms Valentine or Ms Fisher. At two minutes 15 seconds there is a comment: “I did not hear it”.’

Ms Mir argued the arrests were unlawful because her clients could not hear what the officers were during the singing.